Atletico were dealt a huge blow a few days ago when it was announced that the Belgian winger, Yannick Carrasco, has been handed a three-match suspension for his reckless clash with Porto midfielder Otavio in the Rojiblanco’s final group stage match in Portugal. The winger will effectively miss out on both of Atletico’s Round of 16 matches against Manchester United. Although Carrasco has struggled to find his best form this season, his absence will be concerning for Simeone since the winger remains Atletico’s best creator.

Since re-joining the Colchoneros in the summer of 2020, Carrasco has established himself as a mainstay in Diego Simeone’s lineup. The winger was a prominent feature of Atletico’s title-winning side last season, scoring six times and registering ten assists in 30 appearances in LaLiga. Despite his struggles, Carrasco has remained an important part of Rojiblanco’s lineup this season. He has made 20 appearances so far, scoring two goals and adding a further five assists.

Recently, the 28-year-old winger has surfaced as a subject of interest from multiple clubs during the January transfer window. Several clubs, including Tottenham and Chelsea, are reportedly monitoring Carrasco’s contract situation with Atletico. Although he still has two years left in his deal, the winger’s release clause is said to have expired, and that means a host of clubs could approach Atletico for a possible deal soon.

Let’s take a look at his stats from the Champions League to gauge whether the tricky winger is still Atletico’s best creator. 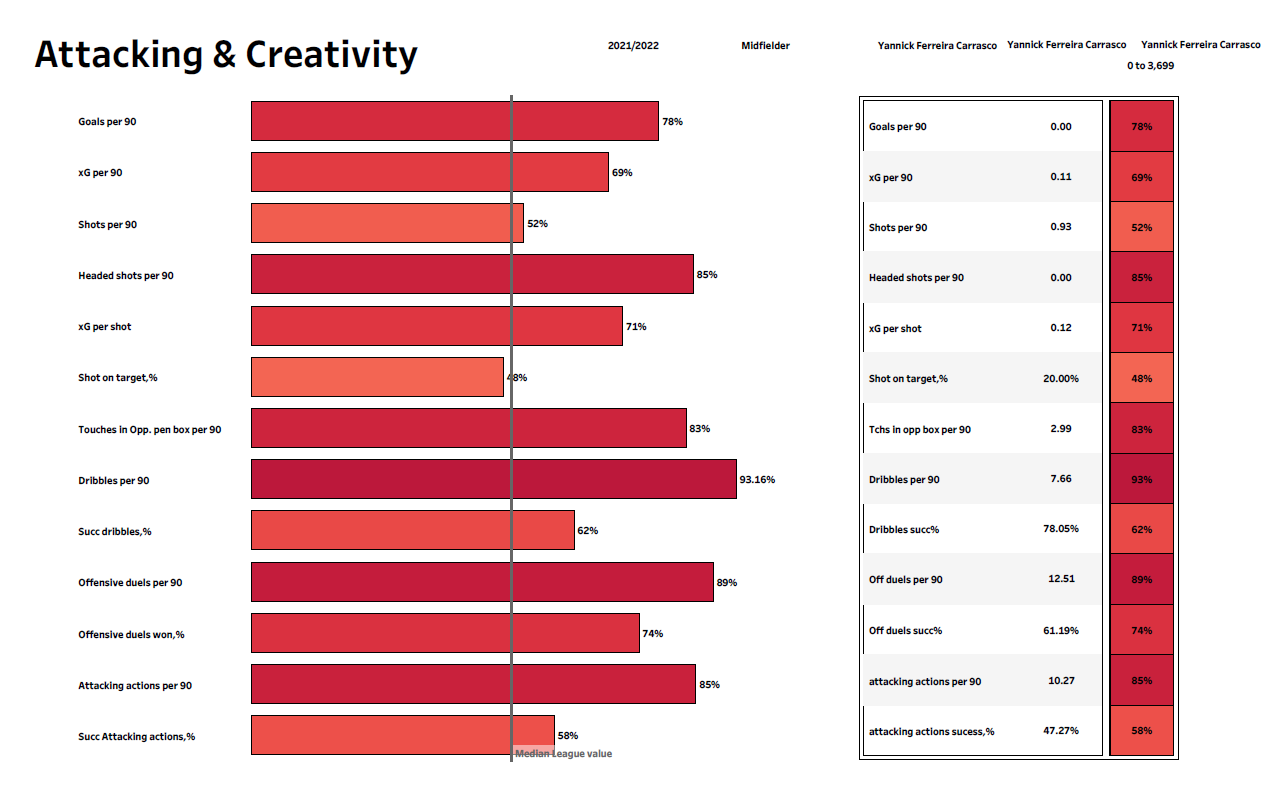 In the above viz., we can see Carrasco’s attacking and creativity stats. The majority of his stats surpass the league median value, with the most notable stats being touches in the opposition box per 90, dribbles per 90, offensive duels per 90, and attacking actions per 90. Carrasco is known for being a versatile player, capable of operating on either flank. He possesses remarkable ability with the ball and utilizes his dribbling to great effect. He can effectively draw out the opposition defenders, creating space for his striker in the process. The winger is a goal threat and has displayed his clinical finishing. He leads the assists chart for his side this season with five assists in LaLiga. Despite his relative decline in form, the Belgian has managed 1.4 shots, 1.7 key passes, and more than two dribbles in the league. In addition, he boasts a passing accuracy rate of 81%. 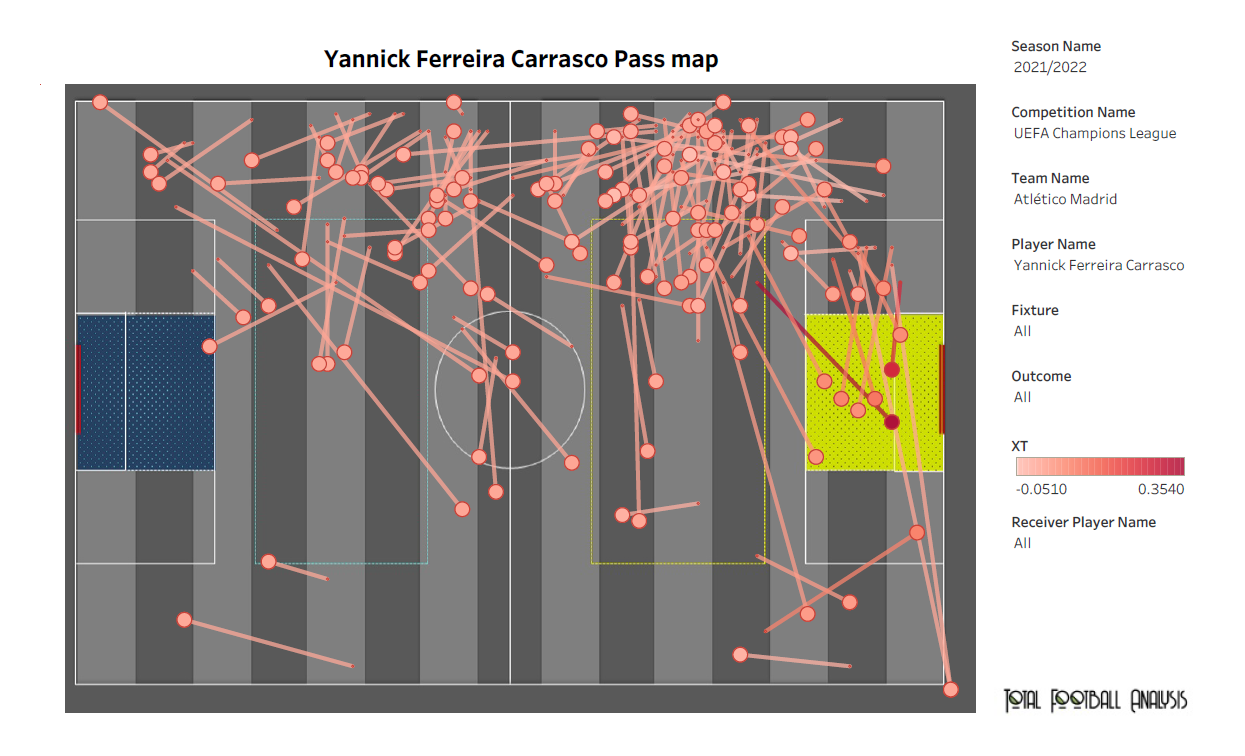 The above ‘pass map’ highlights the location of the pitch where the winger has delivered his wide array of passes. We can see that most of his passes have been delivered from the wide areas on the left. Carrasco is adept at switching the play and can make accurate diagonal passes towards the right wing when the play gets too concentrated on the left side. He is often able to get into dangerous positions in the opponent’s half and looks to cut inside and take a shot. 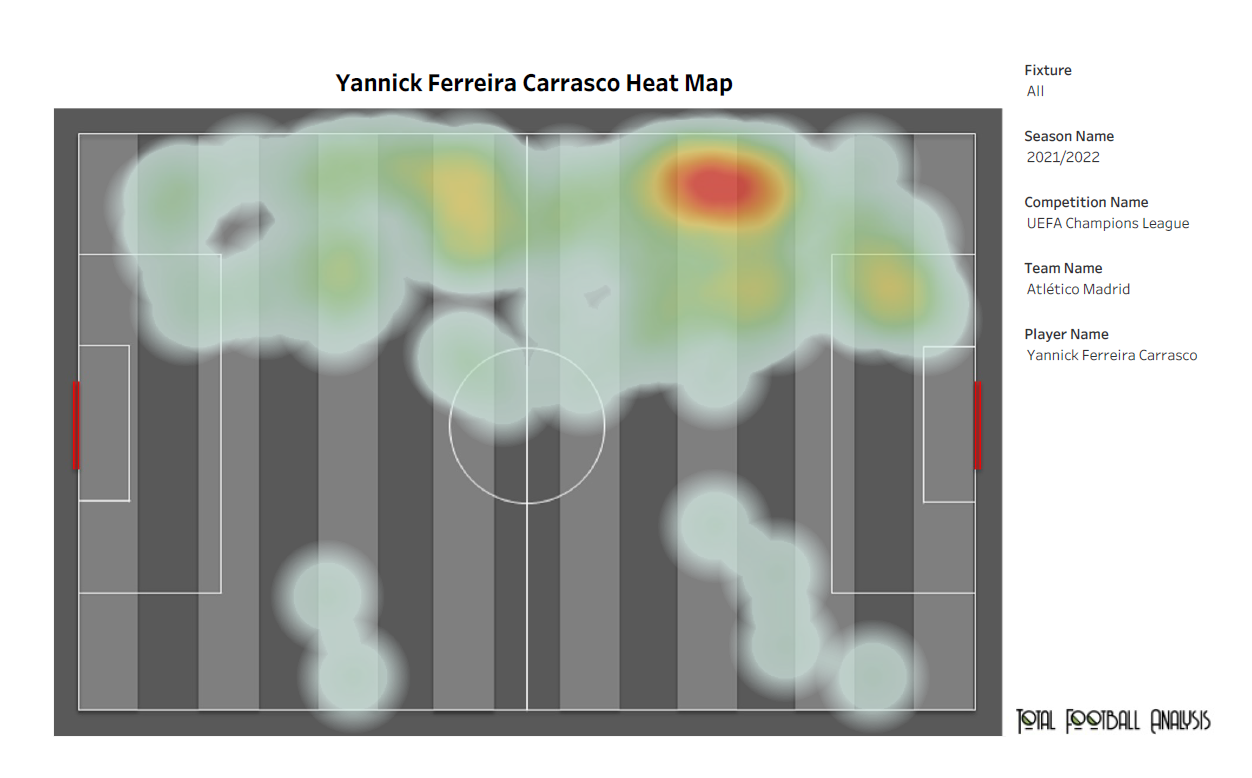 In the above viz., we can see the areas of the pitch where he is most active. This season Carrasco has been deployed both as a wing-back as well as his natural position of a winger. Many pundits have attributed Carrasco’s relative decline in output and poor decision-making this season to him being used as a wing-back. Simeone, in the recent games, is seen reverting to a 4-4-2 formation, and the switch can perhaps improve the Belgian winger’s creative output.

Carrasco’s stats indicate that he remains one of Atletico’s best creators despite not being in his best form. It remains to be seen whether a switch in formation could fire the Belgian back into his top form.