The Rojiblanco’s current season is plummeting from bad to worse at an alarming rate. Atletico’s hopes of retaining the LaLiga title, which were already unlikely, have taken yet another hit. The hit came in the form of a defeat at the hands of Levante. In addition to their poor showing in the league, Simeone’s men have crashed out of both Copa del Rey and Supercopa.

The Colchoneros, who have been known for their defensive solidity since the arrival of Simeone, have failed to solve their issues at the back. They have conceded the highest number of goals among the top-five sides in LaLiga, a scenario that further highlights their defensive troubles. While much of the focus has been on their defensive frailties, Atletico are facing a challenge in the creative department as well. The lack of creative options for Simeone in the midfield or the forward line is another one of their pressing issues. So far, Yannick Carrasco has been Atletico’s best creator, with more dribbles and goal-scoring chances created than anyone in the team.

An important problem that Simeone must address before the Champions League Round of 16 match against Manchester United is to find a replacement for Yannick Carrasco, who is suspended for three matches. A creative option in the attack who can perhaps solve Atletico’s creative problems is the French international Thomas Lemar. However, currently, his role has been limited due to Simeone’s tactics. So far this season, Lemar has been unable to affect important games. Despite that, the Frenchman has a goal contribution of eight in all competitions, and he could be on course to break his personal best since joining Atletico. But much of that scenario would depend on how Simeone uses Lemar.

Let’s take a look at his stats from the Champions League to gauge whether Lemar could solve Simeone’s creative issues. 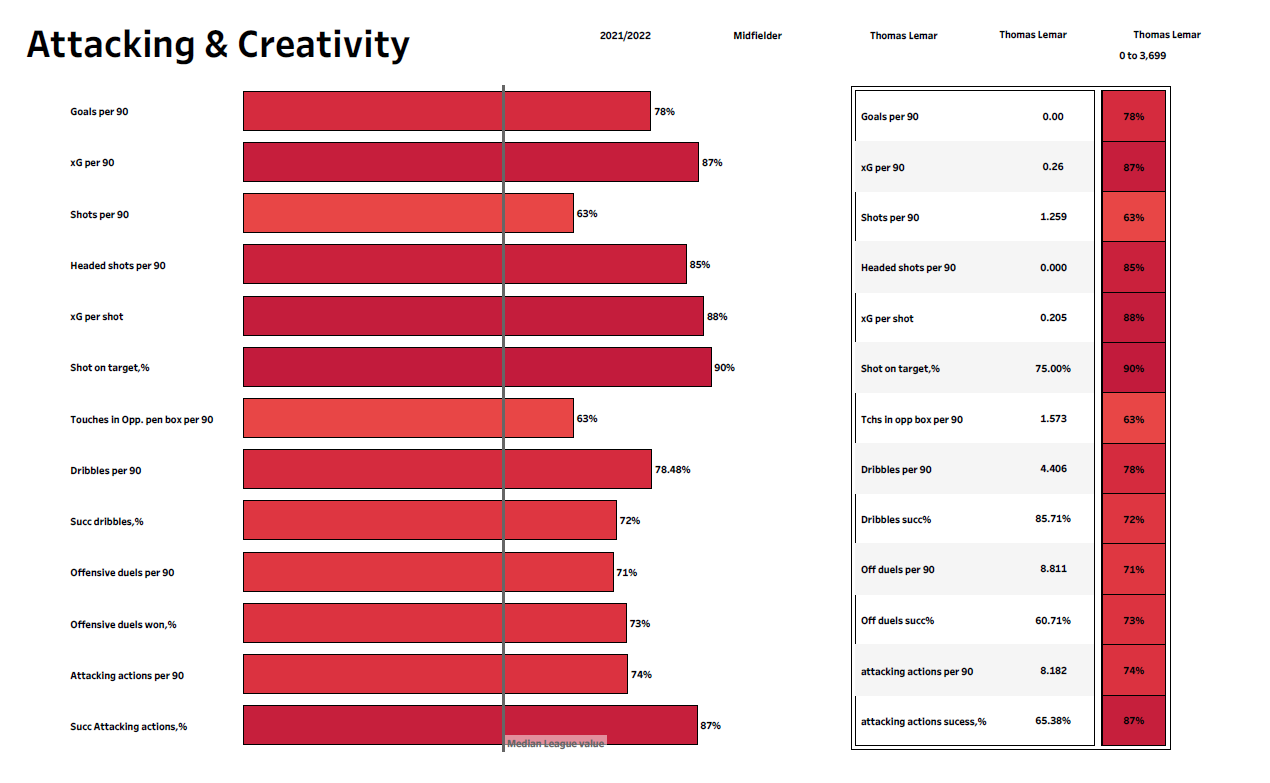 In the above viz., we can see Lemar’s attacking and creativity stats. The majority of his stats surpass the league median, and he ranks highly in many of those stats. His most notable stats are xG per 90, shot accuracy, and successful attacking actions. In addition, Lemar has a dribble success rate of 85.71%, while he averages upward of eight attacking actions per match. The Frenchman is composed on the ball both in open space and in tight areas. He is assured in playing the ball with either foot and can dribble with both his feet. Lemar’s agility makes it harder for his marker to read his movements. 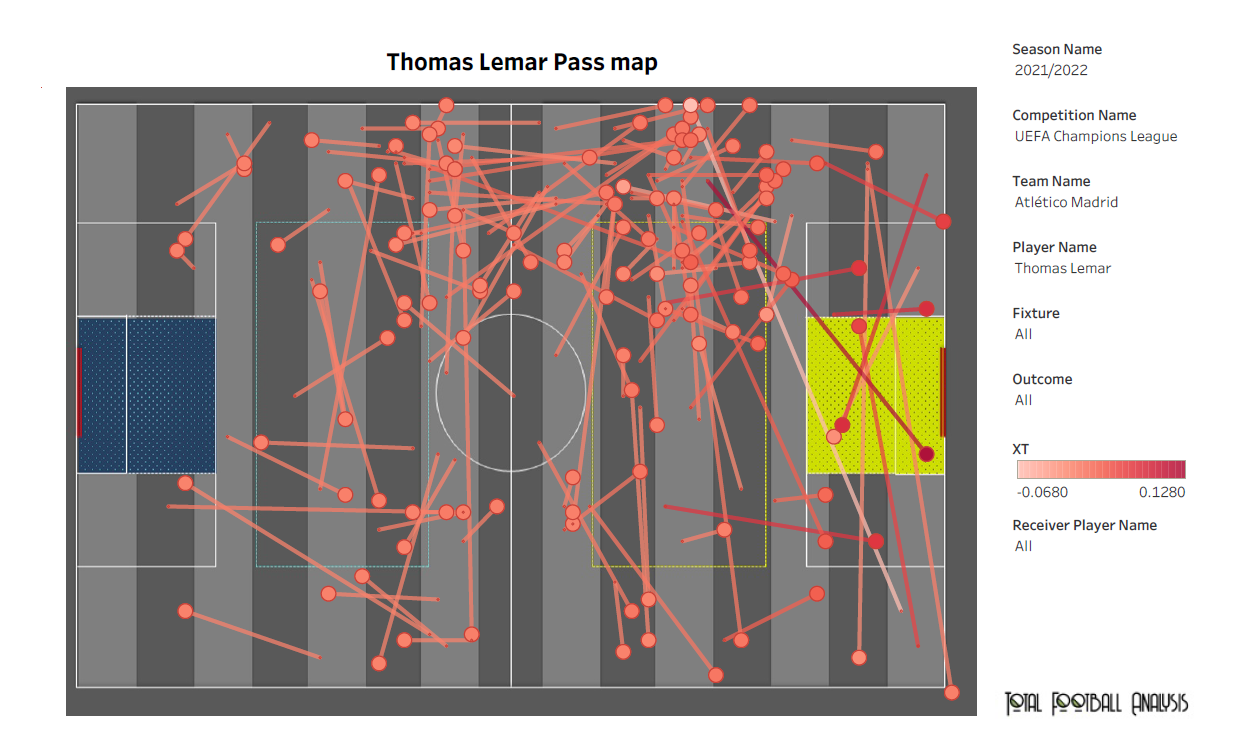 His pass map highlights the areas of the pitch where he has delivered his passes. Most of his passes have been delivered from the left side, owing to the position that he occupies. Lemar has also delivered highly threatening passes into the opposition box. The Frenchman is a capable passer of the ball who is comfortable with both short and long passes. 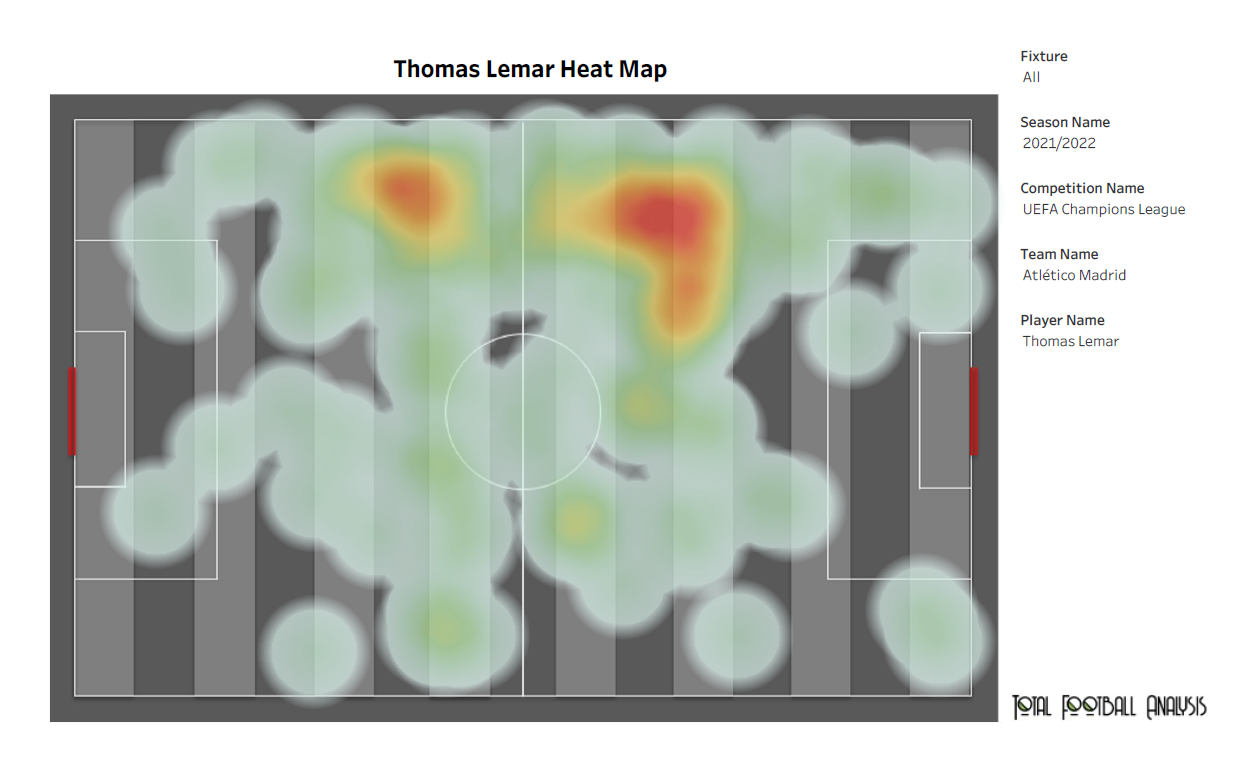 In the above viz., we can see Lemar’s activity and movement on the pitch. Lemar has mostly been deployed in the left side of the midfield, which is also indicated by the red zones on the left wing. He has also covered vast spaces, further indicating his impressive work rate. Lemar’s greatest asset is his versatility, he can operate as a winger, an inside forward, or as number 10 as well. Simeone could deploy Lemar in the forward areas to make use of his creative attributes.

Lemar’s stats indicate that he has the capability to play in advanced areas. His creative nature and versatility could be of use to Atletico in the absence of Yannick Carrasco.