Atletico Madrid are claimed to be interested in signing Barcelona midfielder, Sergi Roberto. Some outlets are even claiming that the versatile midfielder has an offer in hand from the Colchoneros. With his current deal expiring in the summer, Roberto could leave the Catalan giants on a free transfer. The Spaniard is reportedly a subject of interest for multiple LaLiga clubs, and Atletico have also been heavily linked with a move.

Roberto has enjoyed a fairly successful stay at Barcelona since coming through from the club’s youth system. With six LaLiga and two Champions League titles, the 30-year-old has enjoyed a highly successful spell since first breaking into the club’s first team. Although Barcelona manager, Xavi Hernandez, has stated that he would like for Roberto to extend his stay with the club, the player’s wage demands are supposedly causing a roadblock.

The 30-year-old is known for his versatility, keeping his place in the starting XI under multiple managerial changes. Over the years, Roberto has featured as a winger, a right-back, and a central midfielder. Although his performances have declined considerably in recent seasons, with the winger missing out on a large part of the current season due to injury, there is no doubt over the qualities that he possesses. It has been stated that the Rojiblancos hold an interest in Roberto because of his versatility and experience. The 30-year-old could feature in the midfield as a replacement for Hector Herrera, who will leave at the end of the season, or even as a right-back or a wing-back.

Let’s take a look at some stats to gauge whether Roberto is a suitable option for the Colchoneros. 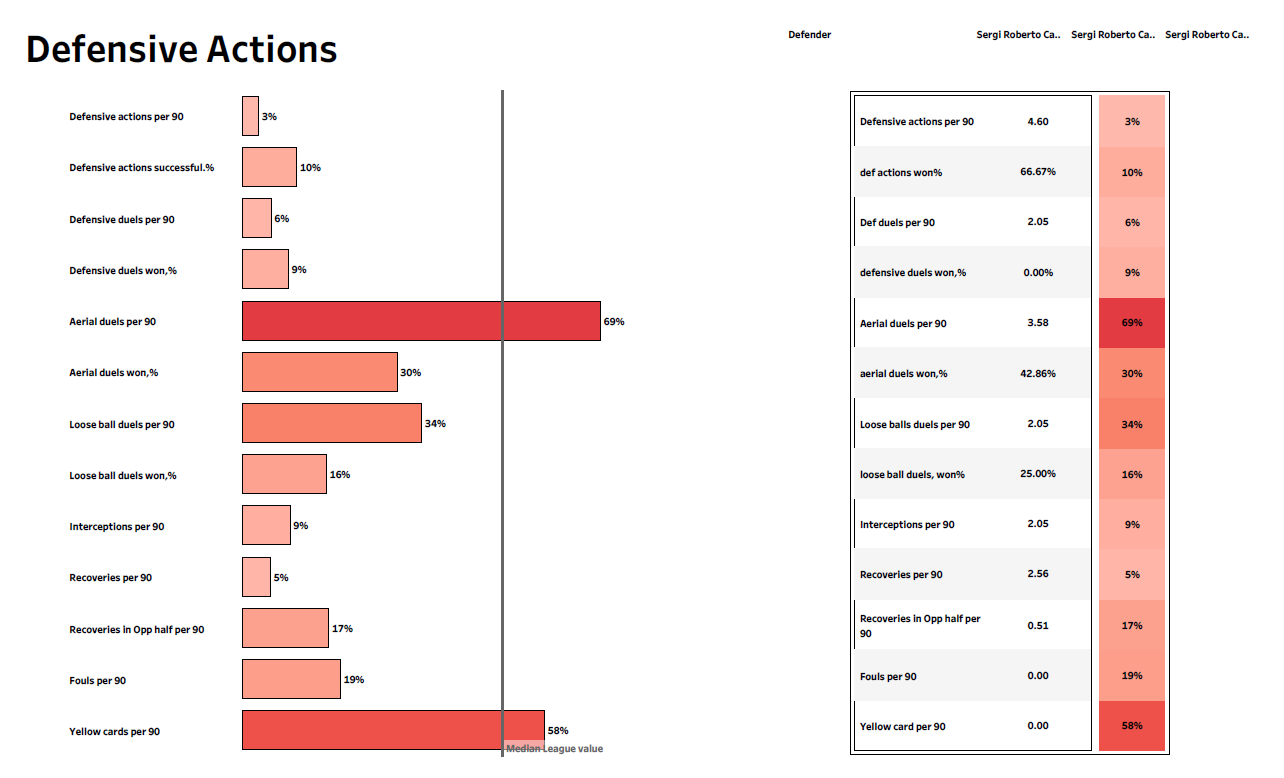 In the above viz, we can see Roberto’s defensive stats. The 30-year-old’s struggles are evident in his stats, as he has struggled in terms of vast majority of his defensive actions. While his limited appearances could also be a factor in his underwhelming stats this season, nonetheless, Roberto’s form has been on a decline in the past couple of seasons, with injuries playing a major role. However, Roberto is known for his excellent passing ability. His style of play is direct, and he is at his best when progressing the ball forward. The Spaniard displays impressive awareness on the pitch and has provided some remarkable assists during his career. 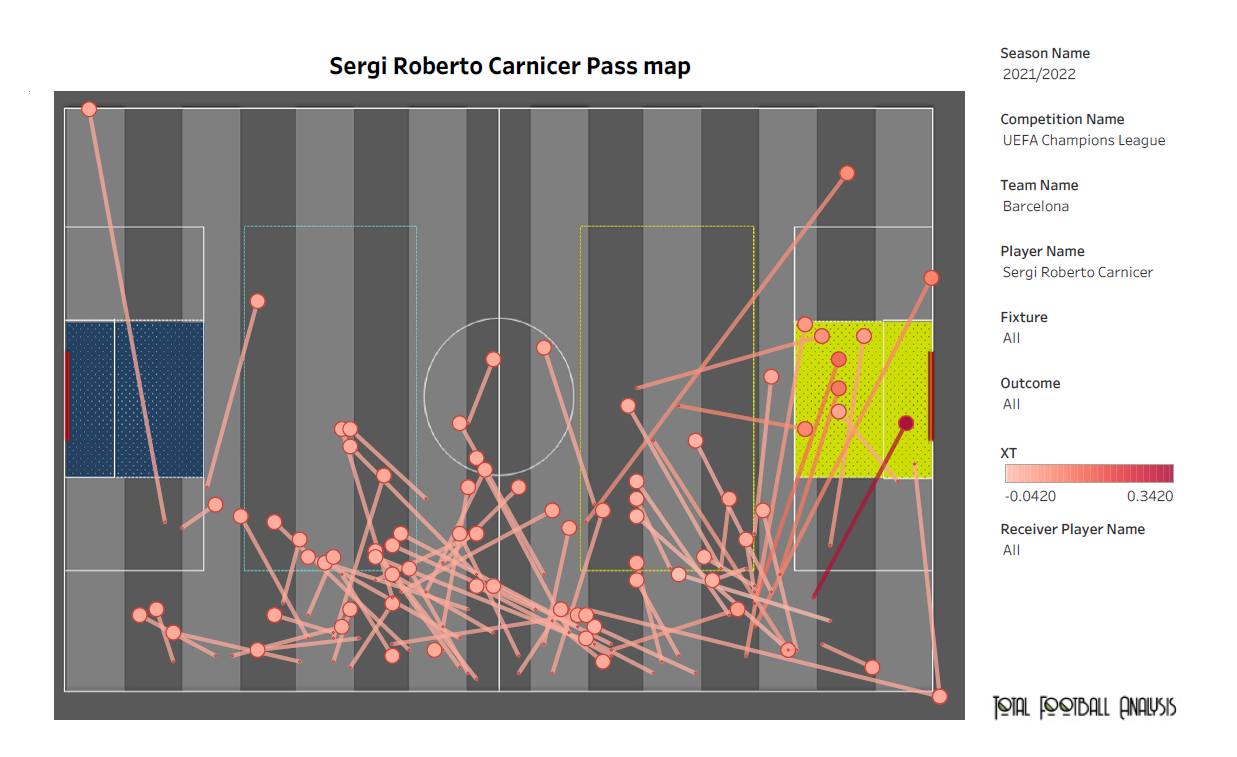 The above viz highlights the areas of the pitch where Roberto has delivered his passes. We can see that most of his passes have been sideways and backwards, however, this situation can be attributed to Barcelona’s overall struggles during the first half of the season. Roberto is capable of cycling possession and is a threat during counterattacks. In addition, the midfielder/full-back is instrumental during the build-up play. 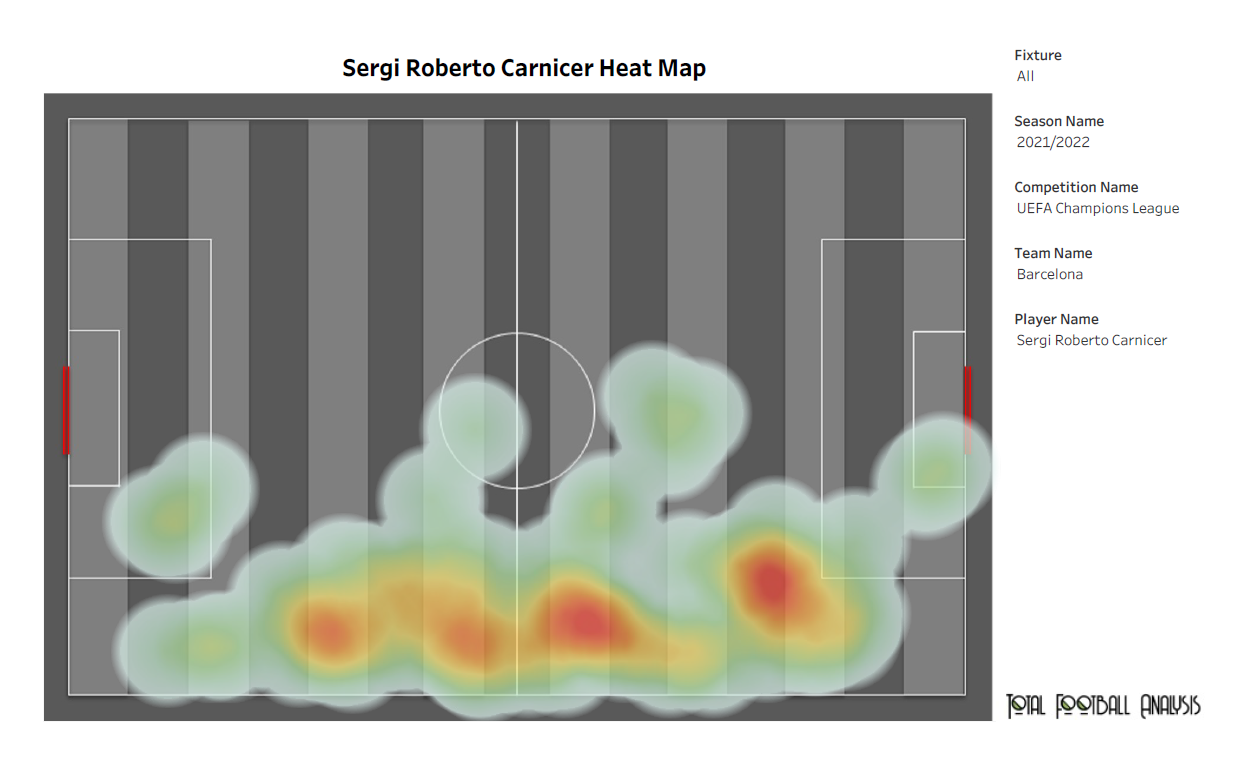 In the above viz, we can see the areas of the pitch where the 30-year-old has been active. This season, Roberto has featured as a central midfielder or a right midfielder. His areas of activity down the right flank are indicated in the above viz. Roberto is known for making forward runs from deep areas and utilizes his speed and dribbling ability to good effect. He tends to stretch the play, dragging the defenders out of position to create space for his attackers. The 30-year-old is also a strong ball-winner.

While his form has declined a lot in the recent seasons, as indicated by his stats, Roberto has displayed his quality over the years. Atletico should consider his injury record, as the versatile midfielder has missed out on several matches due to injuries. It’s difficult to state with certainty whether Roberto could rediscover his form at Atletico.