At the end of the 2020-21 season, Atletico Madrid won the LaLiga title on the last matchday of the season with a 2-1 win over Real Valladolid. In that summer, Los Colchoneros signed the Argentine midfielder, Rodrigo de Paul, from Serie A side, Udinese, to bolster their midfield. The transfer fee was €35 million, and it looked like a business well done, especially as he was a key man for the Argentina squad that won the 2021 Copa America in Brazil. However, in his first season at Atletico Madrid, de Paul was a hit-and-miss from central midfield. Here, we will analyse the Argentine midfielder’s first season at Atletico Madrid. 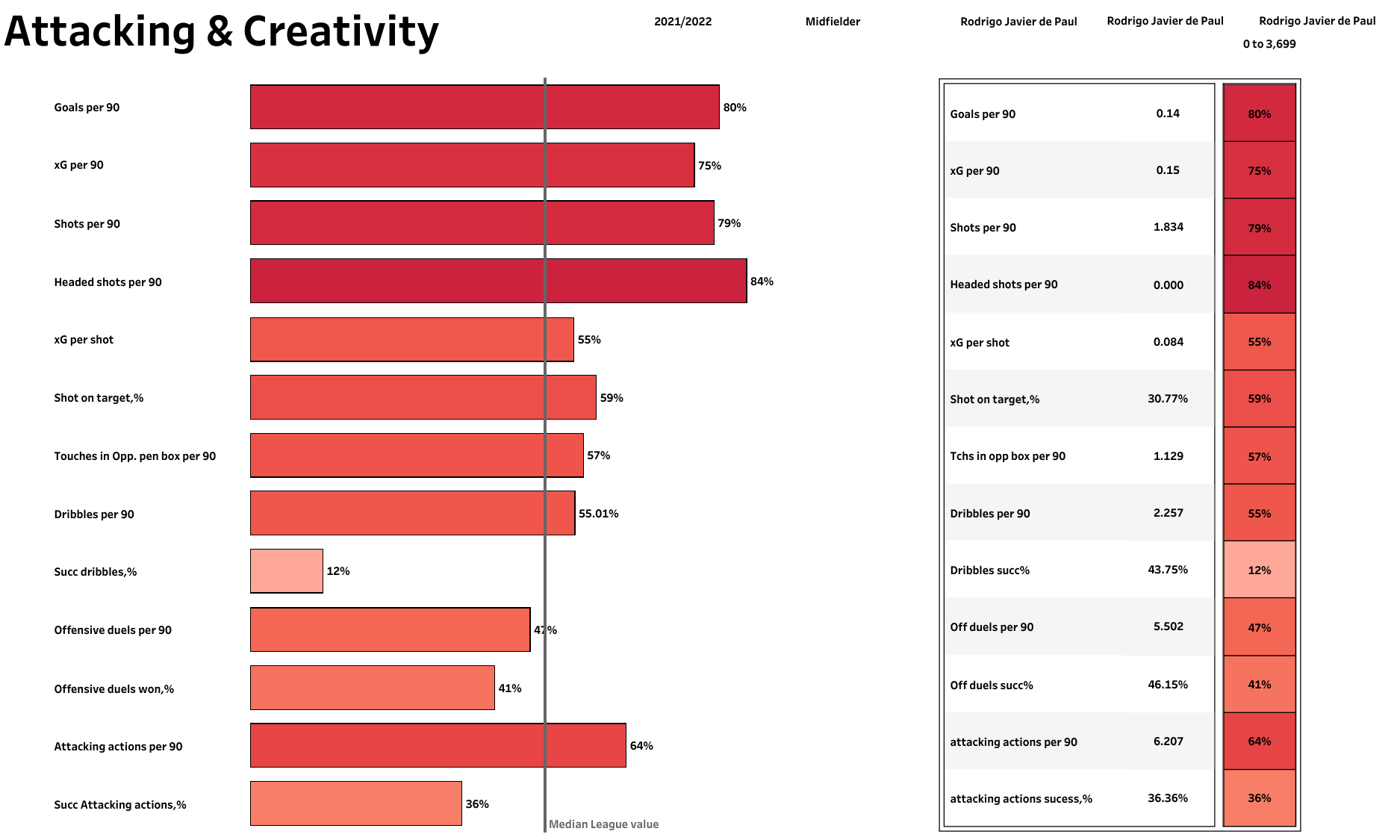 De Paul featured in nine games for Atletico Madrid in the recently concluded 2021-22 UEFA Champions League season, making five starts and playing for 576 minutes. He scored once for Los Rojiblancos at a rate of 0.14 goals per 90, which was not far off the 0.15 per 90 xG estimated. De Paul attempted 1.83 shots per 90 and hit just above 30% of them on target. He ranked in the upper quartile for goals per 90, xG per 90 and shots per 90 among midfielders. De Paul put himself above the median value but not by much in the percentage of shots on target, touches in the opposition’s penalty area per 90 and dribbles per 90 among midfielders. 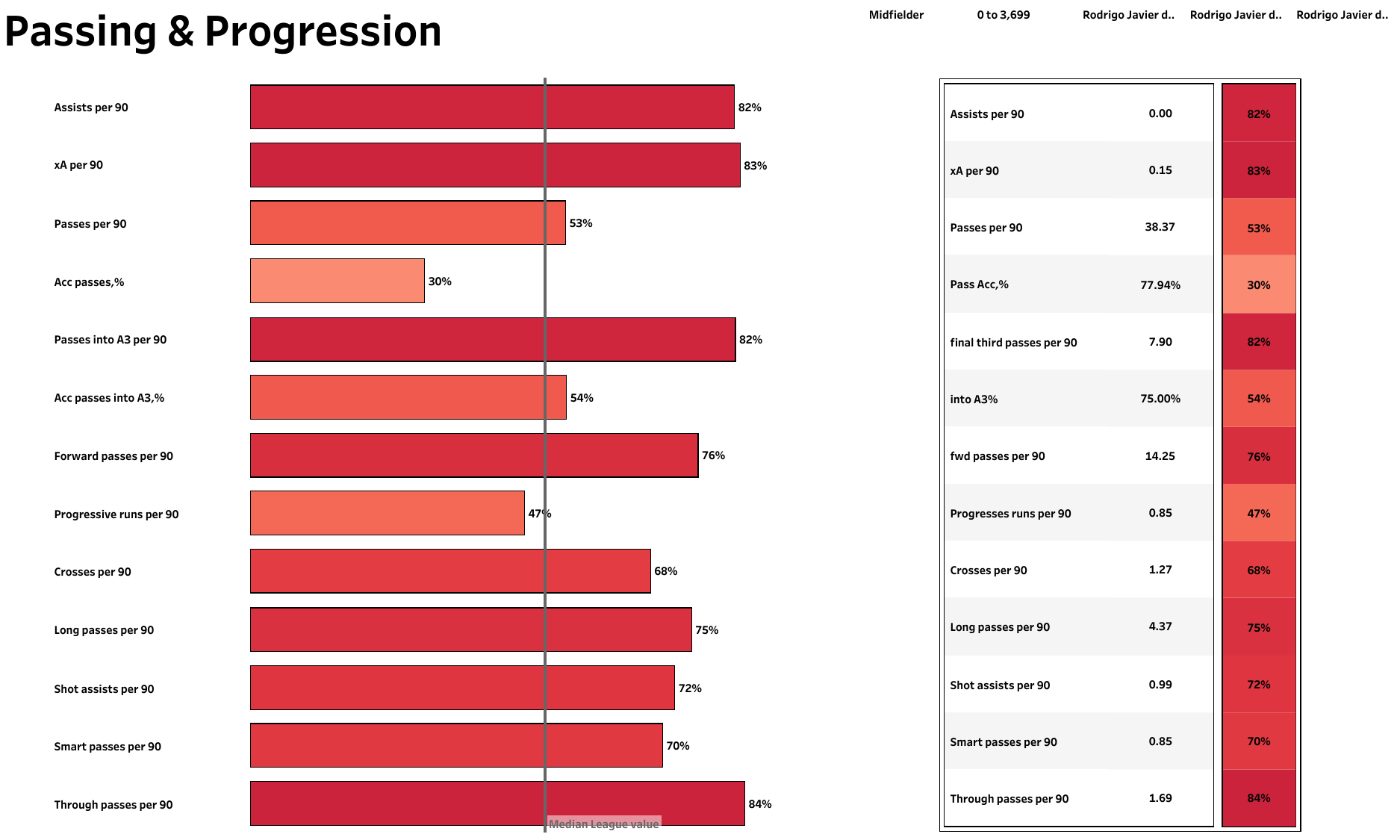 De Paul may not have registered an assist in the UEFA Champions League campaign just gone by for Atletico Madrid but he managed to generate an xA of 0.15 per 90 which put him in the upper quintile for midfielders. He also attempted close to eight passes into the final third per 90, which ranked him in the upper quintile. De Paul was not an active member in the Atletico Madrid build-up game as he attempted only 38 passes per 90, barely above average for a midfielder, and his overall pass accuracy was only a shade below 78%, placing him firmly in the bottom third among midfielders. However, the areas in which the Argentine performed well above average were long balls (at 4.37 per 90) and through balls (at 1.69 per 90). 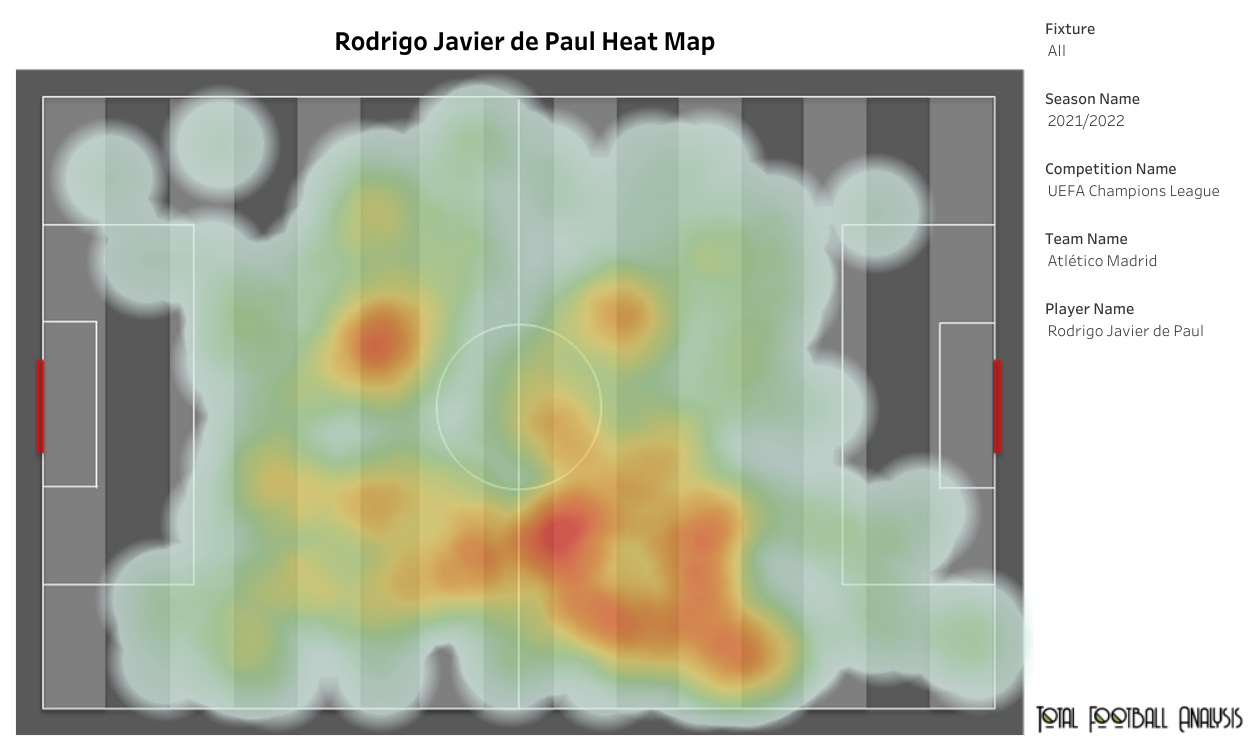 Shown in the above visual is the heat map of de Paul in the 2021-22 UCL. He was at his influential best when he transitioned from midfield to the final third on the right-hand side of the pitch. With the ball at his feet, the Argentine midfielder completed 5.47 progressive passes per 90, 5.31 balls into the attacking third per 90 and 4.38 progressive carries per 90. On the defensive end, he attempted 23.6 pressures per 90, 4.22 tackles and interceptions per 90, 1.56 blocks per 90 and 1.25 clearances per 90.

Rodrigo de Paul’s first season at Atletico Madrid was a hit-and-miss campaign. Next season, the 28-year-old will be hoping for more consistency, particularly in the lead-up to the World Cup in November as he looks to stake his claim in the Argentina squad.