Robert Lewandowski has emerged as a summer transfer target for Atletico Madrid. Over the years, the 33-year-old has demonstrated that he is one of the most clinical goal-scorers in European football. Since joining Bayern from Borussia Dortmund in 2014, the striker has scored a remarkable 339 goals for the club in 366 appearances, winning seven Bundesliga titles, three DFB Cup, five DFL Super Cup, one UEFA Super Cup, and one Champions League title.

The forward has been an integral part of Bayern’s dominance in the Bundesliga since he arrived at Allianz Arena. The Polish striker is under contract with the German giants until 2023, and so far, talks of a new contract have not surfaced. It has been reported that the forward is interested in a move to Spain. In an interview this month, Lewandowski indicated that he would be willing to take on a new challenge. Chelsea, Real Madrid, and Arsenal are other top European clubs who have been linked with a move for the Polish marksman.

With doubts surrounding the futures of Luis Suarez and Antoinne Griezmann, Atletico would be looking to sign a forward, and signing a forward of Lewandowski’s quality and experience could certainly provide Atletico with the edge as they look to move ahead from their current inconsistent season. The 33-year-old striker has scored a brilliant 31 goals in 27 Bundesliga appearances this season. In addition, Lewandowski has found the net 12 times in eight Champions League appearances, as Bayern Munich have successfully progressed to the quarter-finals of the tournament.

Let’s take a look at some stats to gauge Lewandowski’s performances this season. 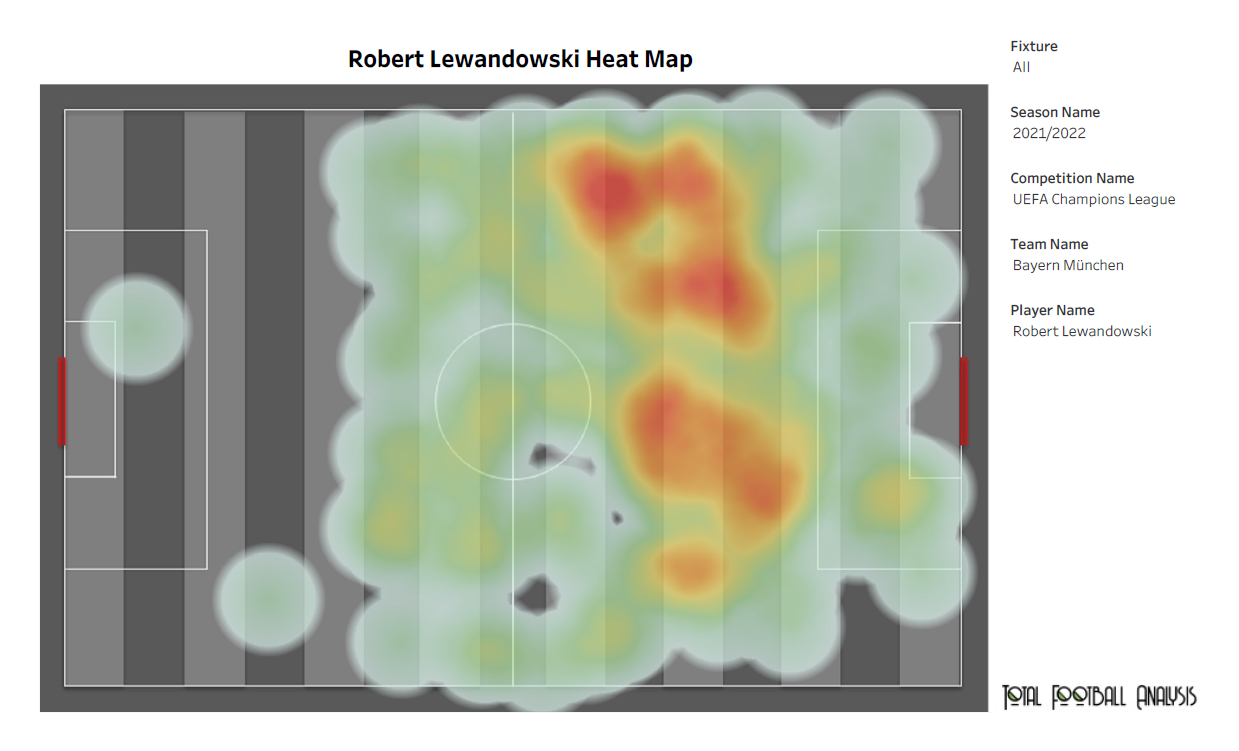 In the above viz, we can see Lewandowski’s area of activity on the pitch. As evident in the above heat map, the 33-year-old has an extensive presence in front of the opposition goal. The forward has been active in the half-spaces on the left wing as well as the right wing. Lewandowski is excellent at finding space, even against low-block defenses. His timing of the movement in the opponent’s half is impressive, and he tends to move away from his marker when the defender is focused on the ball. This movement creates enough of a gap between him and his opponent, allowing him to attack the ball when it arrives in the threatening areas near the penalty box. Once the ball is delivered, the 33-year-old is adept at creating shooting opportunities, adjusting his body to create shooting angles. 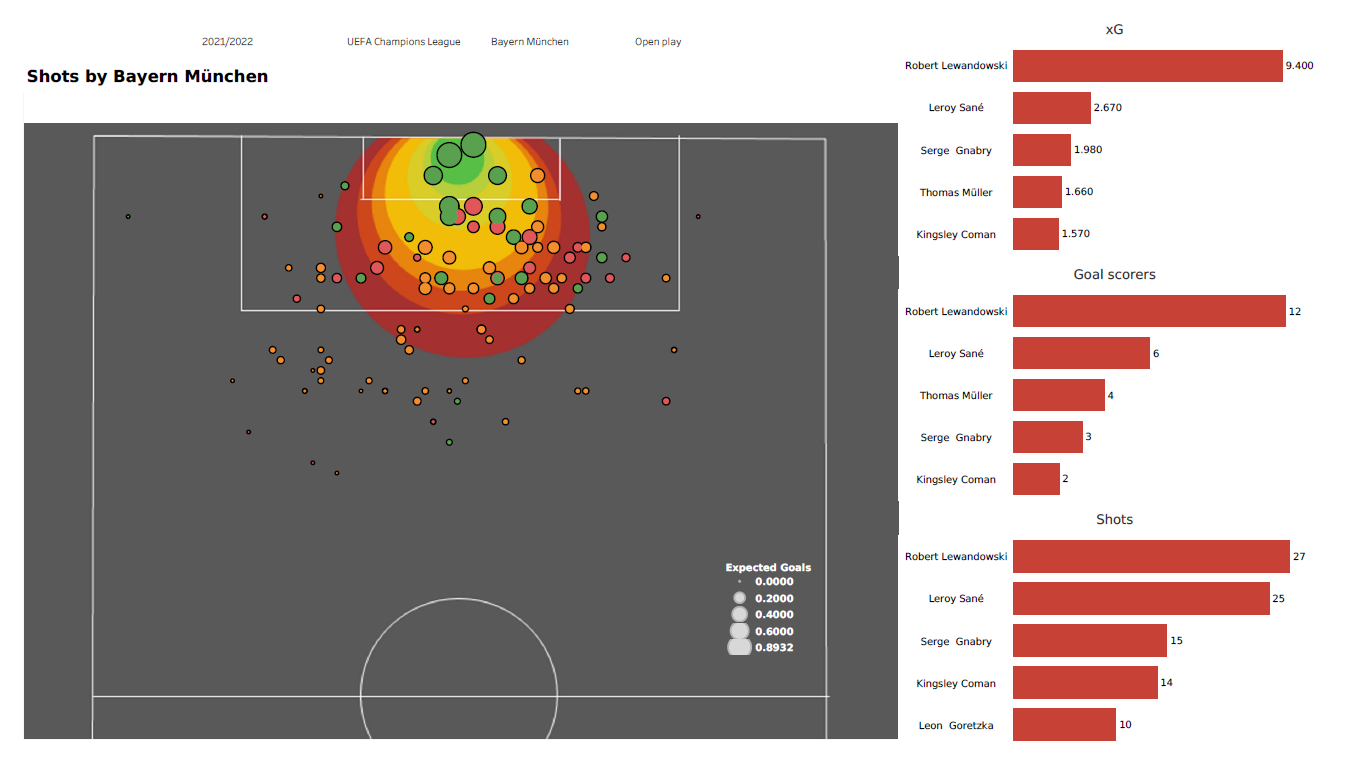 The above viz highlights the locations of shots taken by Bayern Munich in the Champions League. Lewandowski leads his side in terms of xG, goals scored, and shots taken. One of the 33-year-old’s best qualities is his runs in between the defenders. The forward is often seen making runs on the defenders’ blind side. Lewandowski’s hold-up play is equally impressive as he can drop deep to receive the ball, inviting his teammates to join the attack. 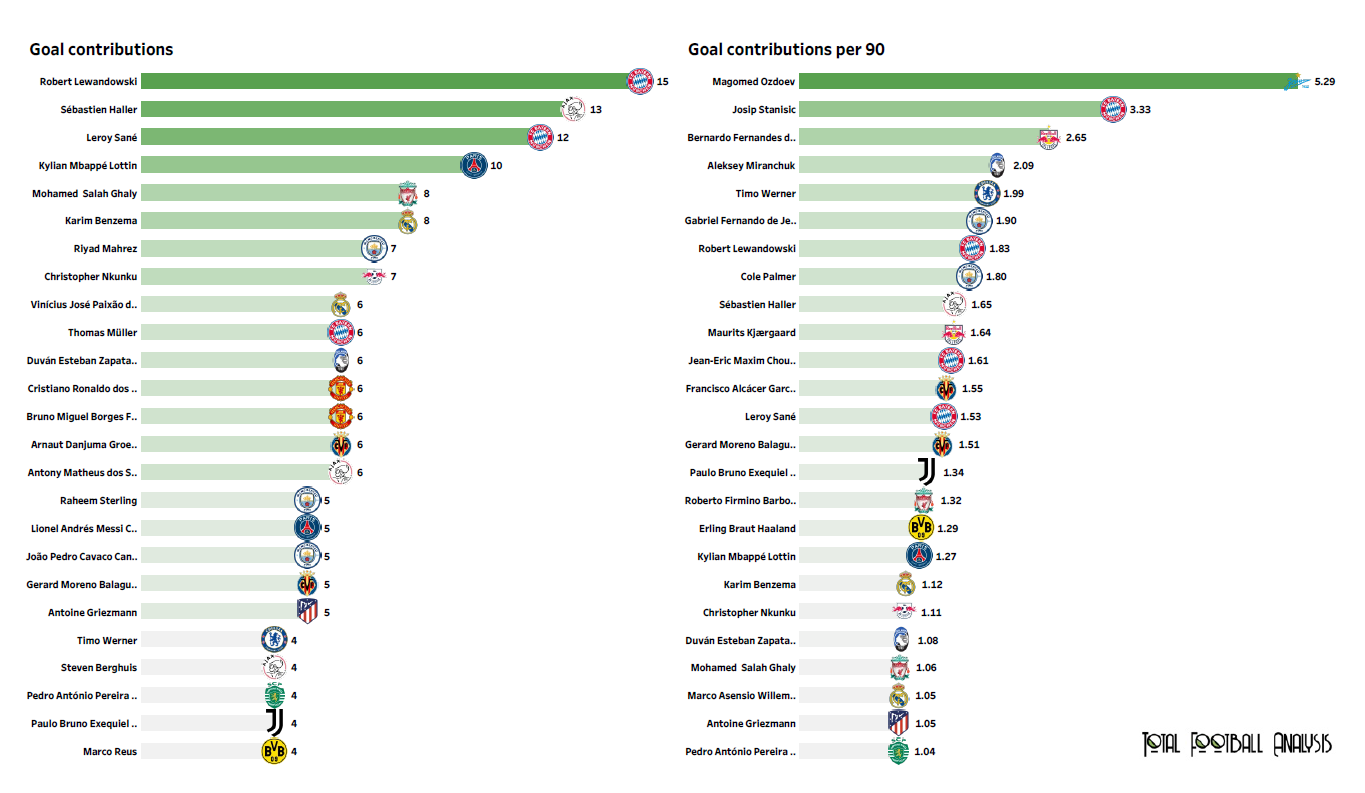 In the above benchmarking stat, we can see that Lewandowski currently leads the charts in terms of goal contribution. So far, he has contributed 15 goals, scoring 12 and creating a further three. The Polish striker has averaged a goal contribution of 1.83 per match.

There are no doubts over Lewandowski’s capabilities as a lethal goa-scorer. Throughout his time at Bayern, the 33-year-old has been an instrumental part of his side’s dominance in the Bundesliga, putting up remarkable numbers across the board. Atletico would need to battle many top European clubs for the signature of the Polish marksman.