According to several reports in recent weeks, Atletico were interested in signing Lille left-back Reinildo Mandava. Many recent reports have also claimed that the Mozambique international has already signed for the Rojiblancos, however, his deal will only begin at the end of the season, after his contract expires with Lille. Reinildo will be Atletico’s first signing of the January window, and it has been claimed that Simeone wants him to provide another option for the left-back role.

Atletico have struggled defensively this season and have conceded more goals this season already than they did in the entirety of their title-winning last season. They have conceded more goals than any of the top four sides. As a result, the Rojiblancos have slipped to fourth place in the La Liga with 10 wins, six draws, and five losses in 21 matches. Simeone’s side has struggled with the back-three system and the Argentine manager has been trying to revert to his preferred 4-4-2 formation, a formation that Atletico have utilized famously since Simeone took charge.

Currently, the only natural left-back at the club is Renan Lodi. Reinildo’s arrival could provide Simeone with another option at the left-back position if he wants to set up more defensively, given the fact that Mozambique international is known for his defensive strengths. A shift to a 4-4-2 formation could also allow Simeone to utilize Yannick Carrasco in the forward areas near the box as the Belgian has struggled at the wing-back role.

Let’s dive into his stats from the Champions League to gauge whether Reinildo could become the key for Simeone’s return to his preferred 4-4-2 system. 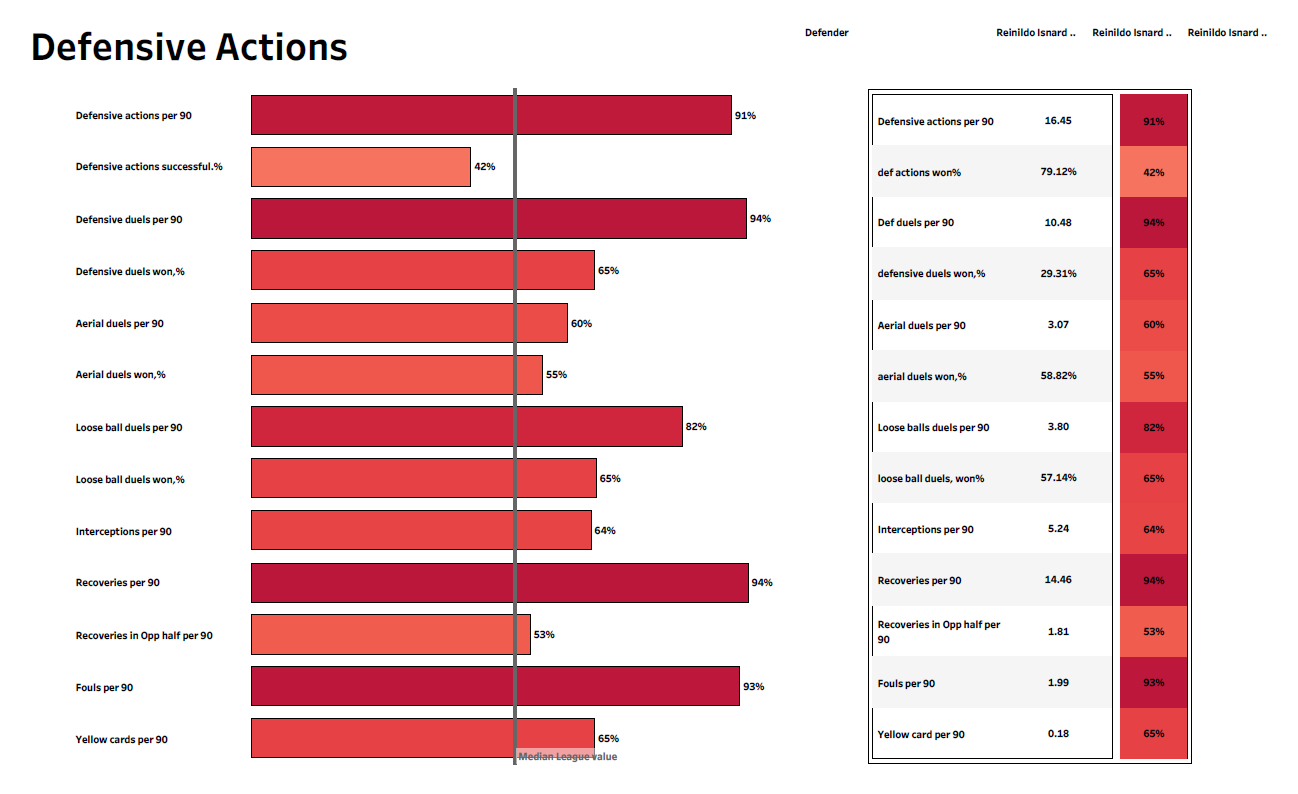 In the above viz., we can see Reinildo’s defensive stats. Most of his defensive stats surpass the league median value. We can see that he ranks highly in many of those metrics as well. His most notable stats are defensive actions per 90, defensive duels per 90, and recoveries per 90. In addition, Reinildo has won 58.82% of his aerial duels and made more than five interceptions per match. Reinildo was part of the Ligue 1 team of the year in the 2020-21 season. He is a defensively strong centre-back who excels at tackles, interceptions, and blocking. 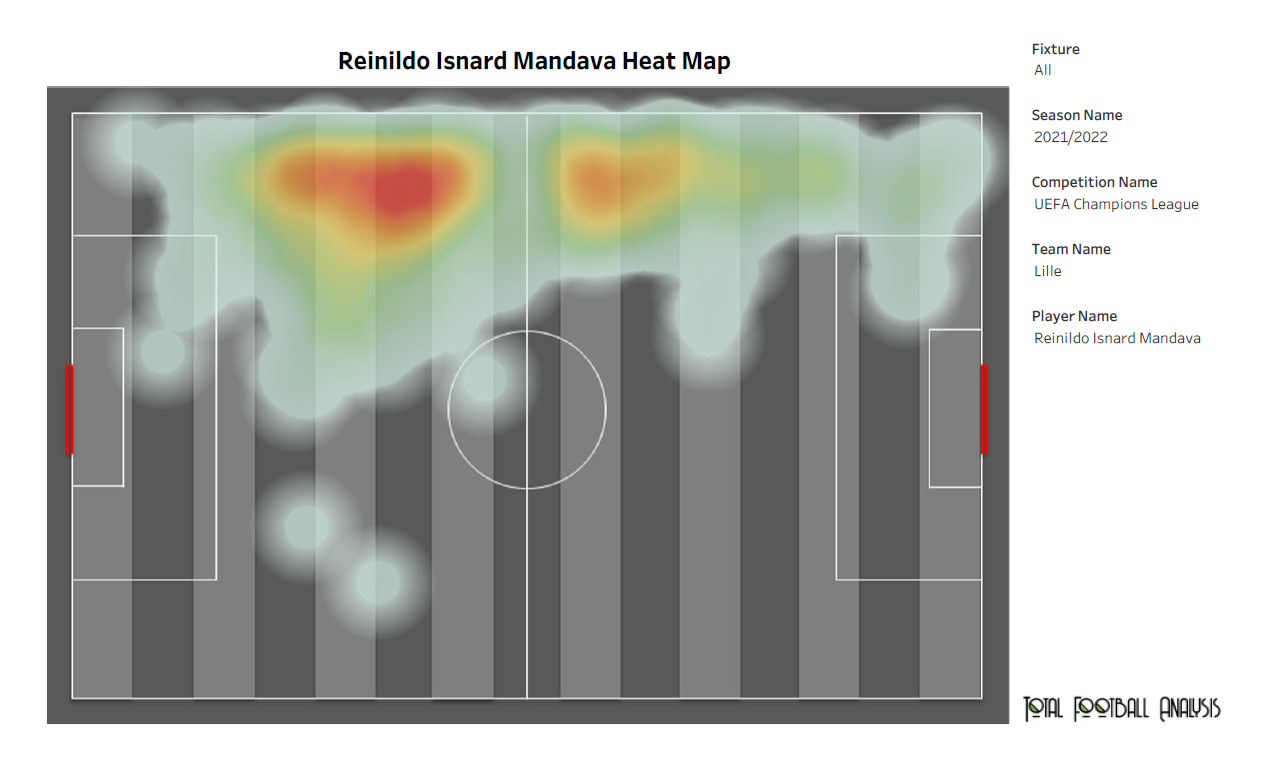 Reinildo’s heat map highlights the areas of the pitch where he is most active. We can see from the above viz. that he is extensively active in his defensive half. Given his familiarity with the left-back position in a 4-4-2 system, Reinildo could easily slot into the left-back position at Atletico. Simeone has been seen utilizing a 4-4-2 formation in the recent games, but his side have still conceded many goals. Reinildo could be rotated with Lodi in the games where Simeone requires more defensive output from his side. 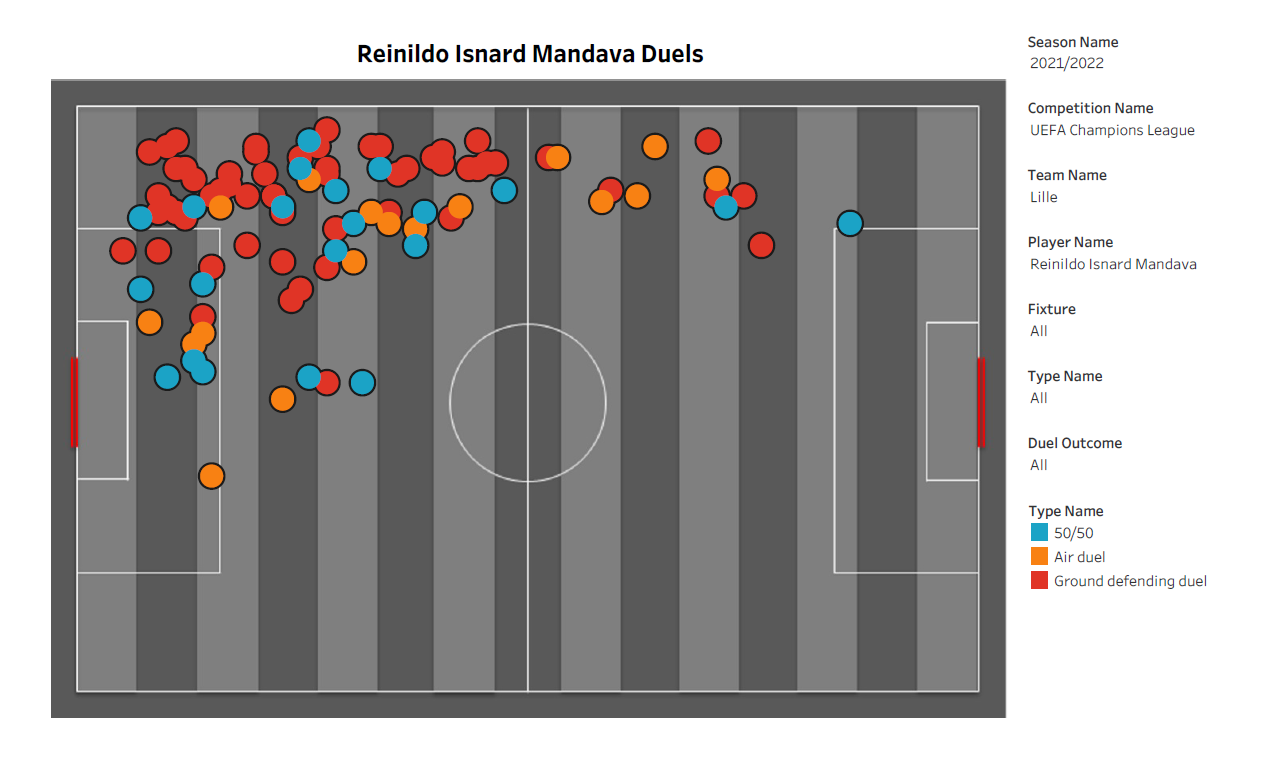 In the above viz., we can see the areas where Reinildo engages in defensive and aerial duels. Reinildo is brilliant in one-on-one situations and is seen as a player who is difficult to dribble against. He prefers safe passing and his success rate is decent as well. The above viz. further highlights his lower activity in the opponent’s half.

Reinildo could prove to be a signing who can provide Simeone with the defensive solidity that his side have been known for since he arrived at Atletico. The Mozambique international could become the key for Simeone to revert to a 4-4-2 formation.