Atletico’s recent 3-0 win against Osasuna brought some relief to Diego Simeone’s camp. Not only did the win see the Rojiblancos secure their first clean sheet in eight matches in all competitions, but also it was their first clean sheet in an away match this season. The record is uncharacteristic for Simeone’s side, as has been their overall defensive performance this season. In 25 matches in LaLiga, Atletico have conceded 34 goals, a defensive record that is worst at this stage since Simeone’s appointment.

Since the start of the season, Simeone has tweaked his defensive lineup plenty of times due to multiple injuries. Along with switching from a back-three to a back-four, the Argentine manager has deployed 13 different combinations of defenders, a scenario that indicates that Simeone is still not convinced of his best combination. Among the defenders who have featured the most in Atletico’s defensive lineup is the Spanish defender Mario Hermoso.

Hermoso was one of Rojiblanco’s most consistent performers last season, making 31 appearances in Atletico’s title-winning campaign. However, just like many other Atletico players, Hermoso has been inconsistent this season. There have been performances where he has looked impressive, such as the ones in recent victories against Valencia and Getafe, where he scored two late goals in each, helping his side take the three points. In some other matches, he has been underwhelming, such as the 2-4 defeat against Barcelona, where he failed to contain Adama Traore. In addition, Hermoso has been positionally poor in multiple games this season. As a result, Simeone has, at times, deployed him as a left-back or on a more offensive role as a left-wing-back.

Let’s take a look at his stats from the Champions League to gauge if he could fare better at left-wing. 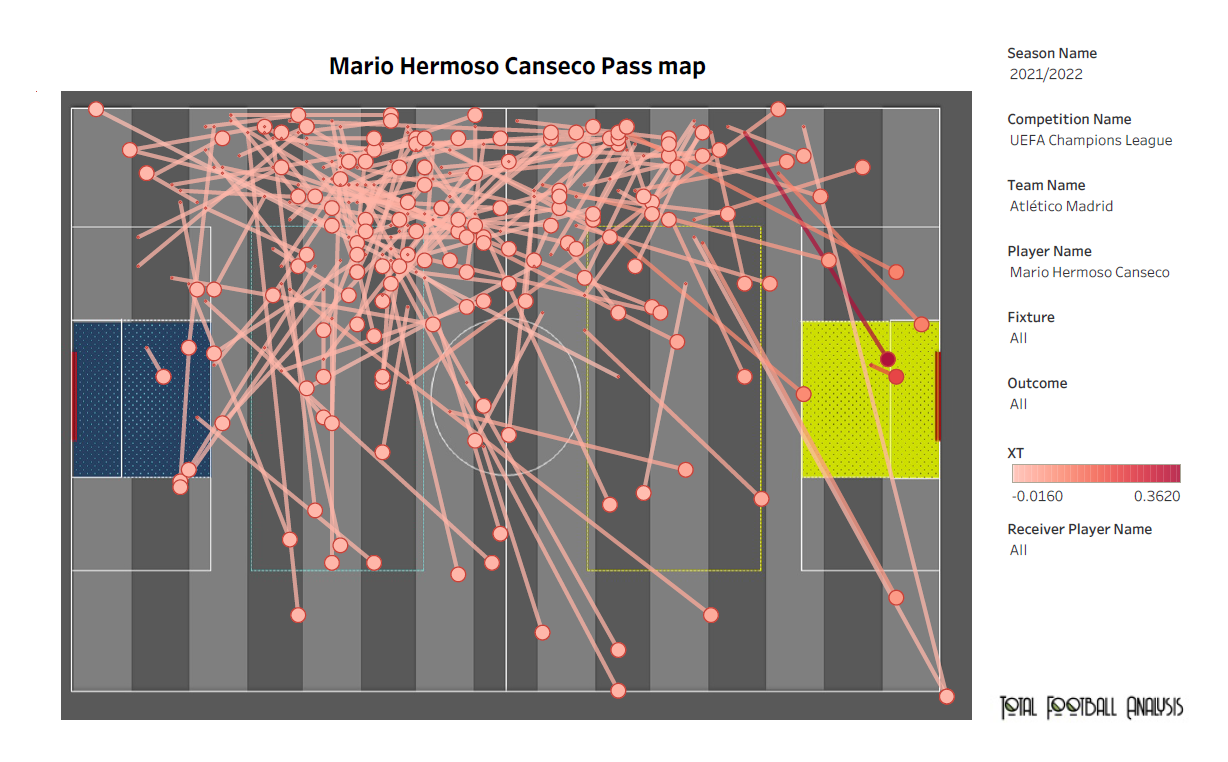 In the above viz., we can see the wide array of passes that Hermoso has delivered in multiple areas of the pitch. Hermoso possesses impressive passing ability, and his accuracy with those passes is also decent. We can see that he has attempted multiple diagonal balls from the half-spaces in the opponent’s half. Hermoso can be regularly seen attempting to progress the ball forward and often attempts to link up with his forward players. Hermoso is also adept at sending long balls to the wide players with cross-field passes. 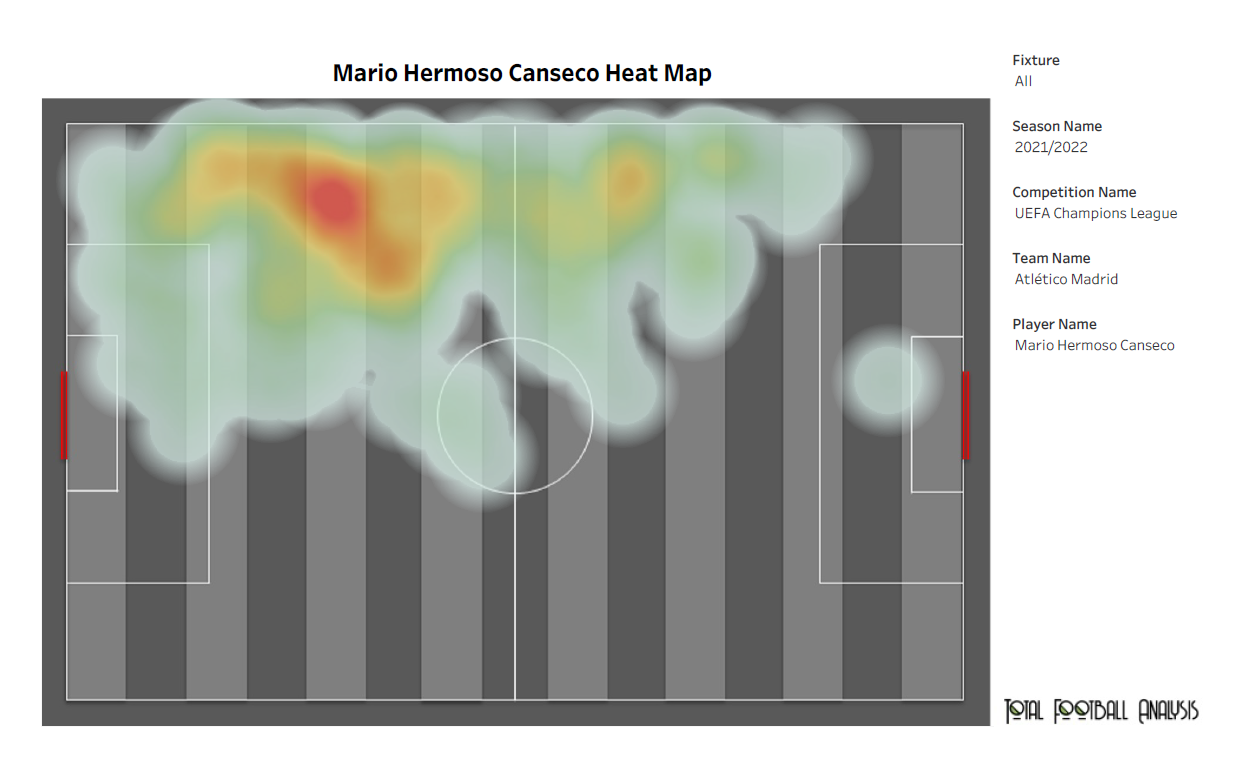 The above viz. highlights Hermoso’s area of activity on the pitch. He has been most active on the left wing in his half near the touchline. This season Hermoso’s poor positioning has left his side vulnerable multiple times. In the recent game against Barcelona, Hermoso was often caught out of position. The majority of his appearances this season in the LaLiga have come in the centre-back position, and Atletico have conceded a lot of goals. Although Atletico’s defensive frailties cannot be attributed to him, Hermoso may be better suited as a left-back. 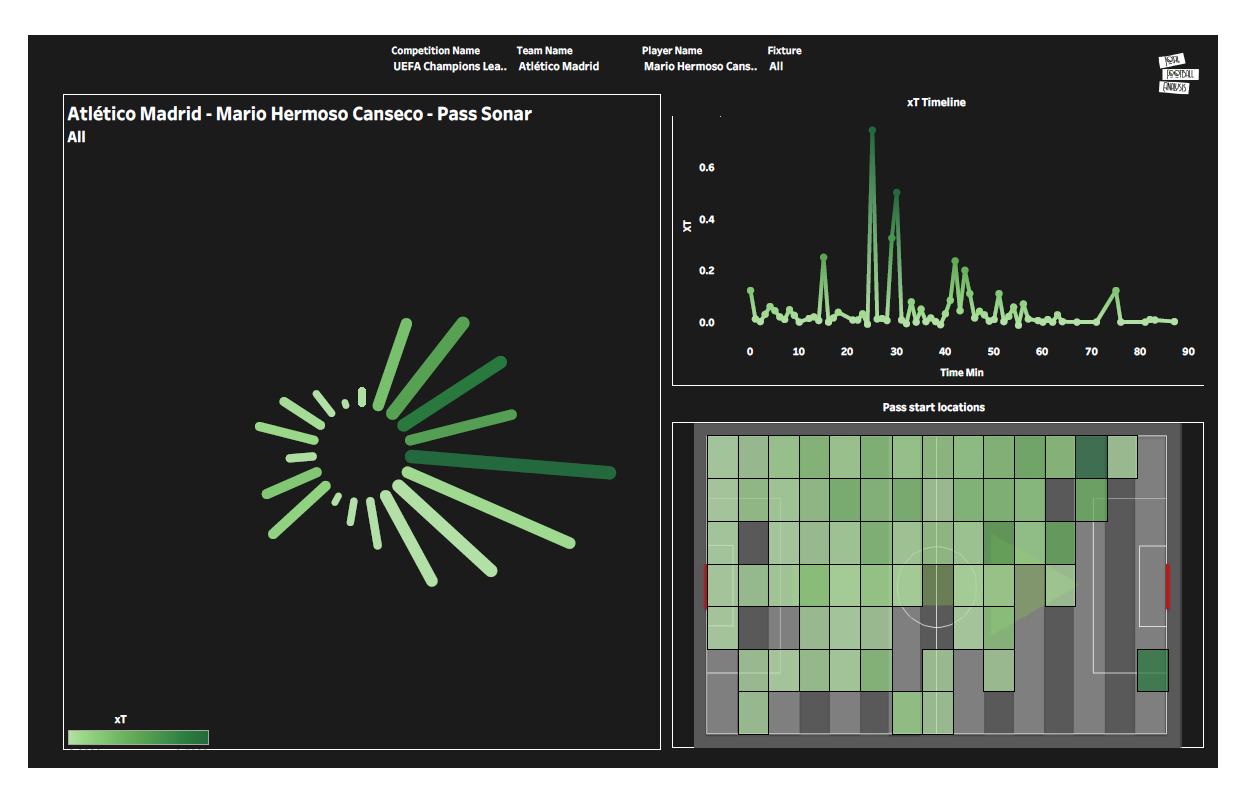 In the above pass sonar, we can see Hermoso’s directionality of passes. In addition, we can spot the areas of the pitch where he has delivered threatening passes. Hermoso is assured in possession and has decent ball control. He has also displayed his capability in delivering line-breaking passes which help to progress the ball behind the opponent’s line of defense.

Hermoso’s poor positioning, along with underwhelming performances as a centre-back this season, have forced Simeone to deploy him as a left-back or as a wing-back. The games against Valencia and Getafe indicate that Hermoso can become an effective player in the forward areas as a left-back. His recent performances, along with his stats, indicate that Hermoso might be better suited as a full-back or as a wing-back.