Atletico Madrid’s defensive troubles continued in their recent game against Getafe. In a thrilling match at the Wanda Metropolitano, the Rojiblancos managed to secure a 4-3 win via Hermoso’s late overhead kick. While it has been well documented by now that Atletico are not the same defensive force that they were in the previous seasons, Simeone’s men did show strength of character after going down on 10 men to come out on top. The win has now moved Atletico in contention for the top four, level on points with fourth-placed Barcelona.

In a match that yet again showcased Colchonero’s defensive frailties, Luis Suarez had a game to forget. The Uruguayan missed a penalty in the opening minutes and looked like a frustrated figure during the match. He was eventually taken off after Felipe’s red card. Suarez, who was a key part of Atletico’s title-winning side last season, has been unable to find consistent form throughout the season. He has scored eight goals in 22 league appearances and just one in six Champions League matches. The Uruguayan striker has found the net just once in his last nine league appearances, indicating a massive decline in his output.

At 35 years of age, Suarez could not be expected to perform at the level that the fans have gotten used to over the years. Furthermore, there have been talks of him leaving at the end of the season. However, Simeone would be hoping to count on Suarez’s experience in the upcoming Champions League tie against Manchester United.

Let’s take a look at some stats from the Champions League to gauge his performances in the current season. 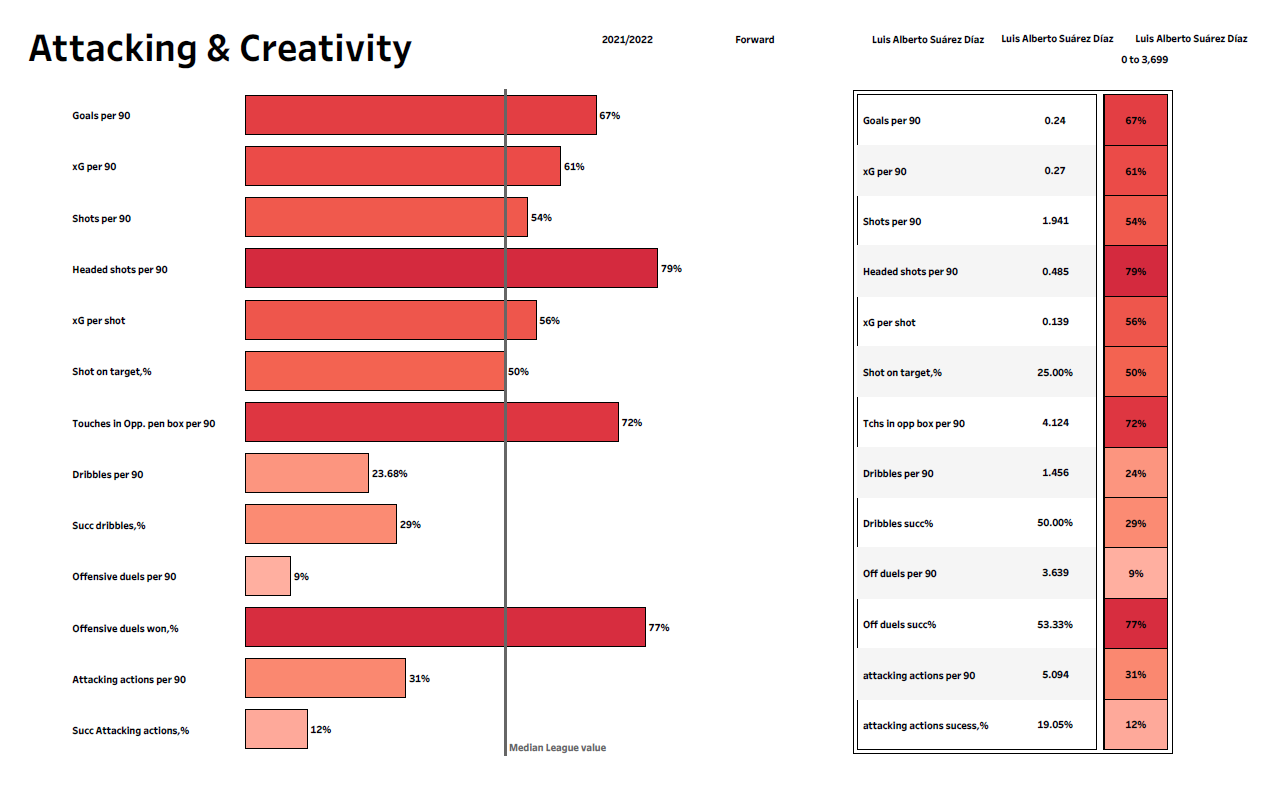 In the above viz., we can see Suarez’s attacking & creativity stats. Although the majority of his stats are above the league median value, Suarez has not stood out in any of the metrics. His most notable stats are headed shots per 90 and offensive duels per 90. The Uruguayan striker has a low average xG of 0.27, and his shot accuracy stands at 25%. In the previous seasons, Suarez displayed his awareness and positioning to aid his side’s attacking play.  He’s dependable playing with his back-to-goal, combining with teammates. Suarez demonstrates the strength to fend off defenders and the focus to set back to teammates, making him a capable target player. Additionally, his movements created space for other players as well. 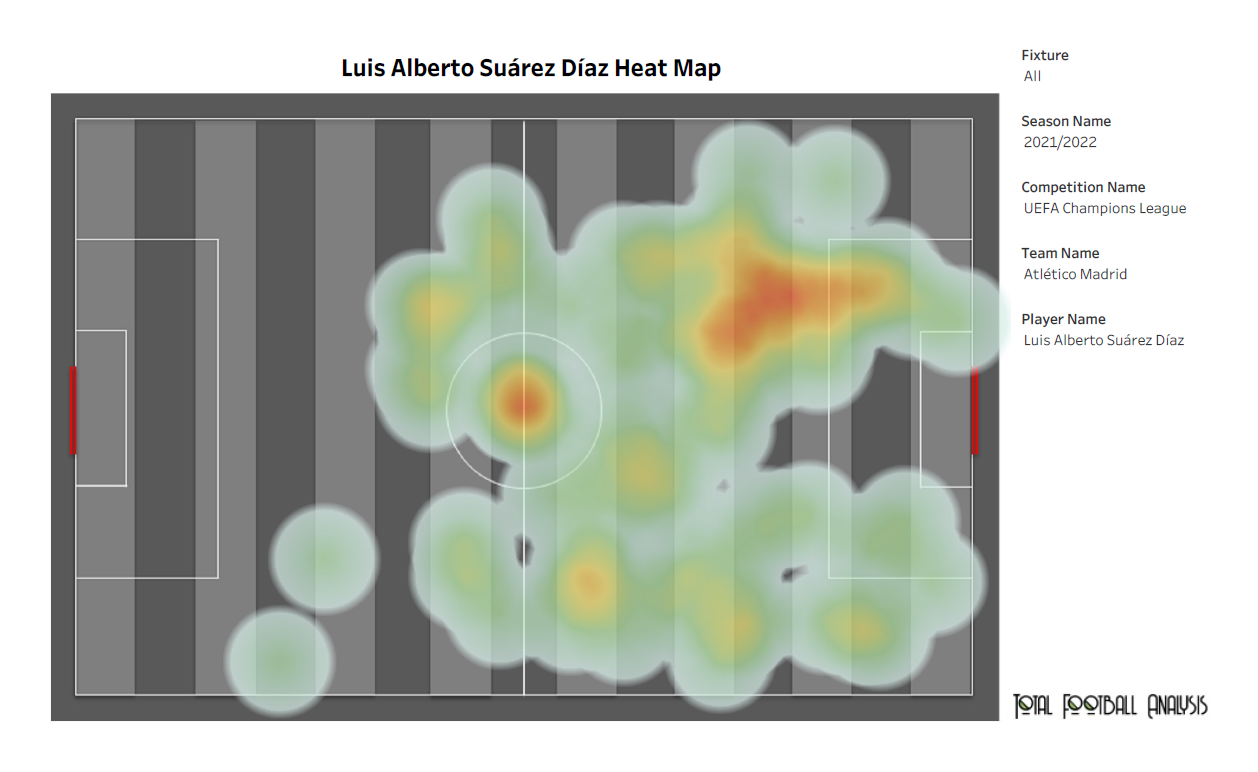 The above viz. highlights the areas of the pitch where he is most active. During the build-up phases of the games, Suarez drops deep in his half, as seen in the above viz. as well. The Uruguayan tries to hold on to the ball and combine with a teammate before making a run towards the opposition box. The above viz. indicates that Suarez has been most active in the half-spaces on the left flank, although he is also adept at switching places towards the right. In Simeone’s 4-4-2 system, Suarez is deployed on the right side of the frontline. 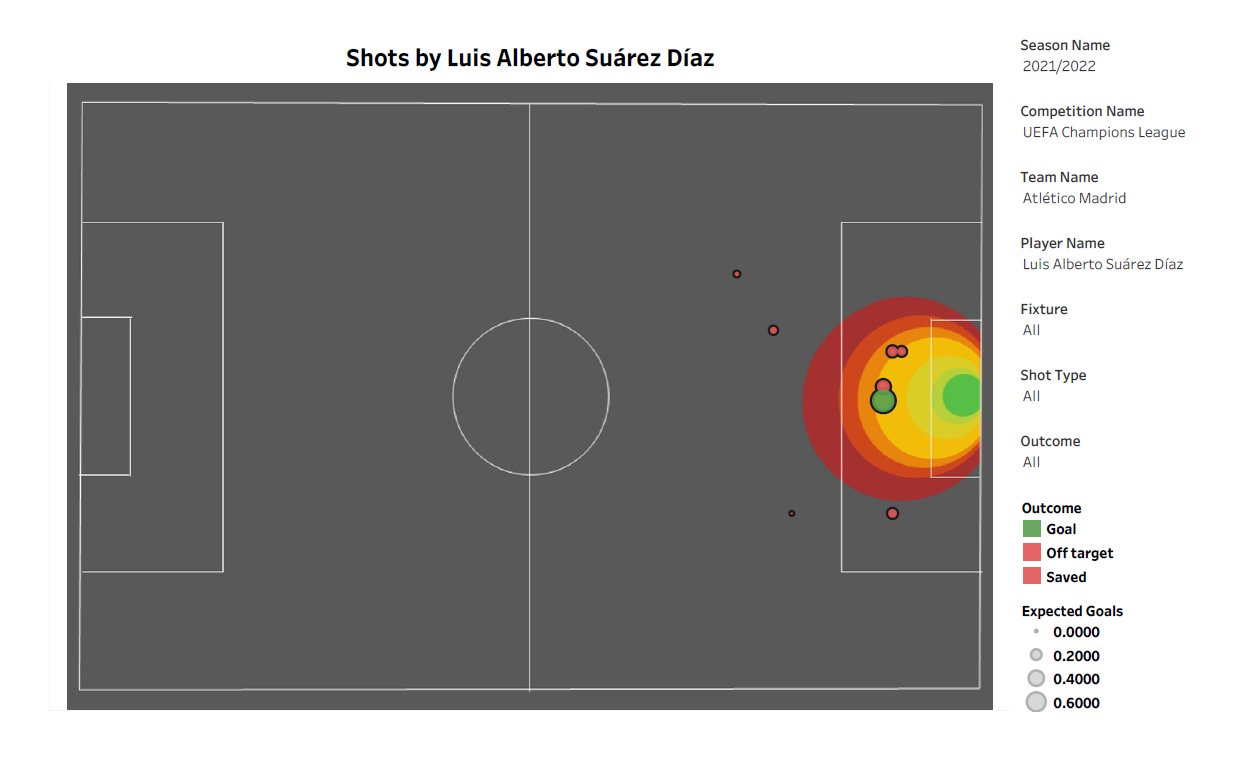 The above shot map indicates the locations on the pitch where Suarez has taken his shots. We can see that the Uruguayan striker has not been able to penetrate the opposition box frequently this season. He has scored just one goal this season, and most of his shots have been taken from inside the opposition box.

Suarez’s stats and his recent performance show a marked decline in the Uruguayan’s form. It is looking likely that Suarez will leave at the end of the season. However, before that, Simeone would be looking forward to utilizing Suarez’s extensive experience in the Champions League Round of 16.