Recent reports suggest that Atletico Madrid are interested in bringing Lautaro Martinez from Inter Milan in the upcoming summer transfer window. Diego Simeone is claimed to be a long-term admirer of the 24-year-old striker, with Atletico also trying to sign Martinez back in 2017. With Luis Suarez likely to depart at the end of the season, Atletico would be in the market for a replacement, and Martinez is one of the players on their wish list.

The Argentinian international has also been linked with a move to Real Madrid, Barcelona, and Manchester City. The 24-year-old is enjoying an impressive campaign with the Nerazzurri and is currently the joint-top scorer, along with Edin Dzeko. Martinez has scored 15 goals and registered six assists in 35 matches in all competitions. Although the Argentine striker’s contract runs till 2026, Inter’s financial condition could force their hand to sell the player during the next transfer window.

Some reports claim that Simeone is interested in deploying Martinez alongside Joao Felix and Angel Correa. While there are other areas that the Colchoneros need to reinforce, such as midfield and defense, the Argentine manager remains keen on bringing Martinez to Wanda Metropolitano.

Let’s take a look at some stats from the Champions League to gauge if Martinez would be a suitable fit in Simeone’s attack. 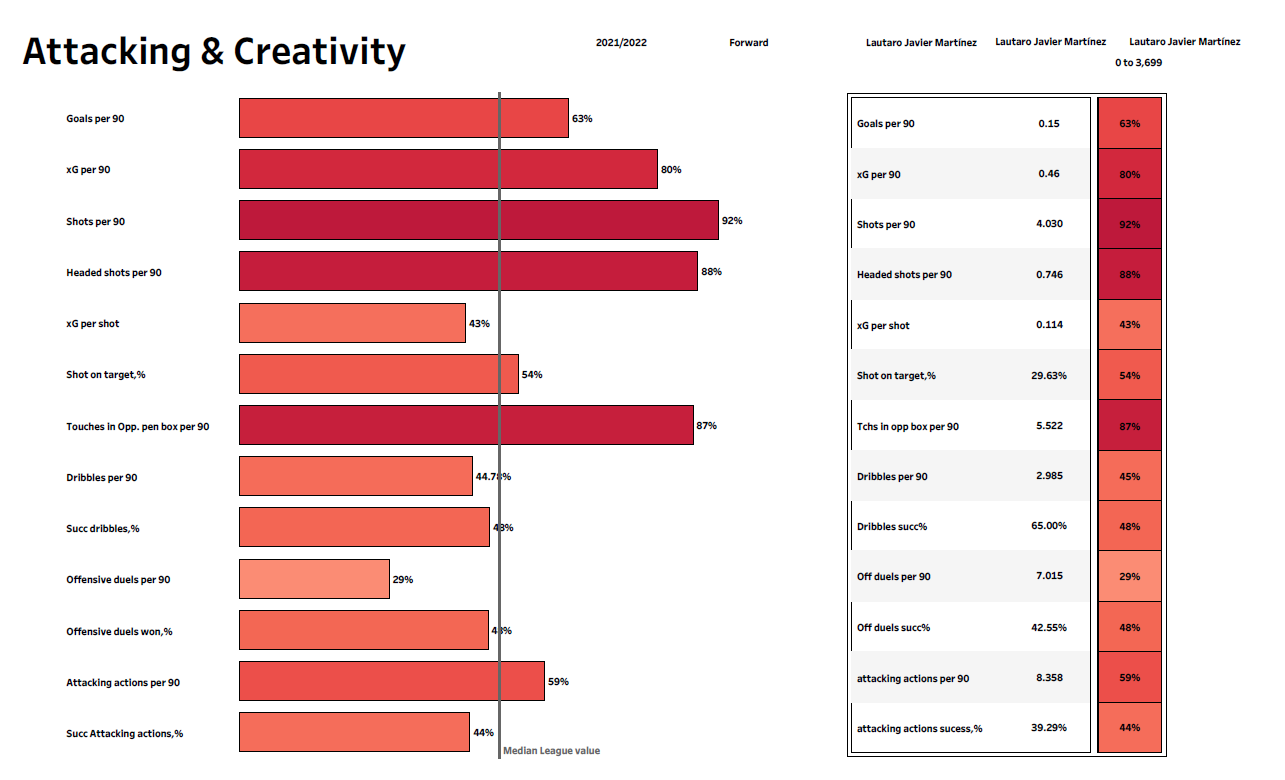 In the above viz, we can see Martinez’s attacking & creativity stats. Most of his stats surpass the league median, with the most notable stats being xG per 90, shots per 90, headed shots per 90, and touches in the opposition box per 90. Martinez is known for his impressive finishing and threatening end product. He demonstrates an excellent shooting technique, and he can adapt himself to gain an advantage while taking a shot at the goal. The 24-year-old is clinical in his finishing with both feet. In addition, he displays a blend of awareness and creativity that makes him an excellent centre-forward. 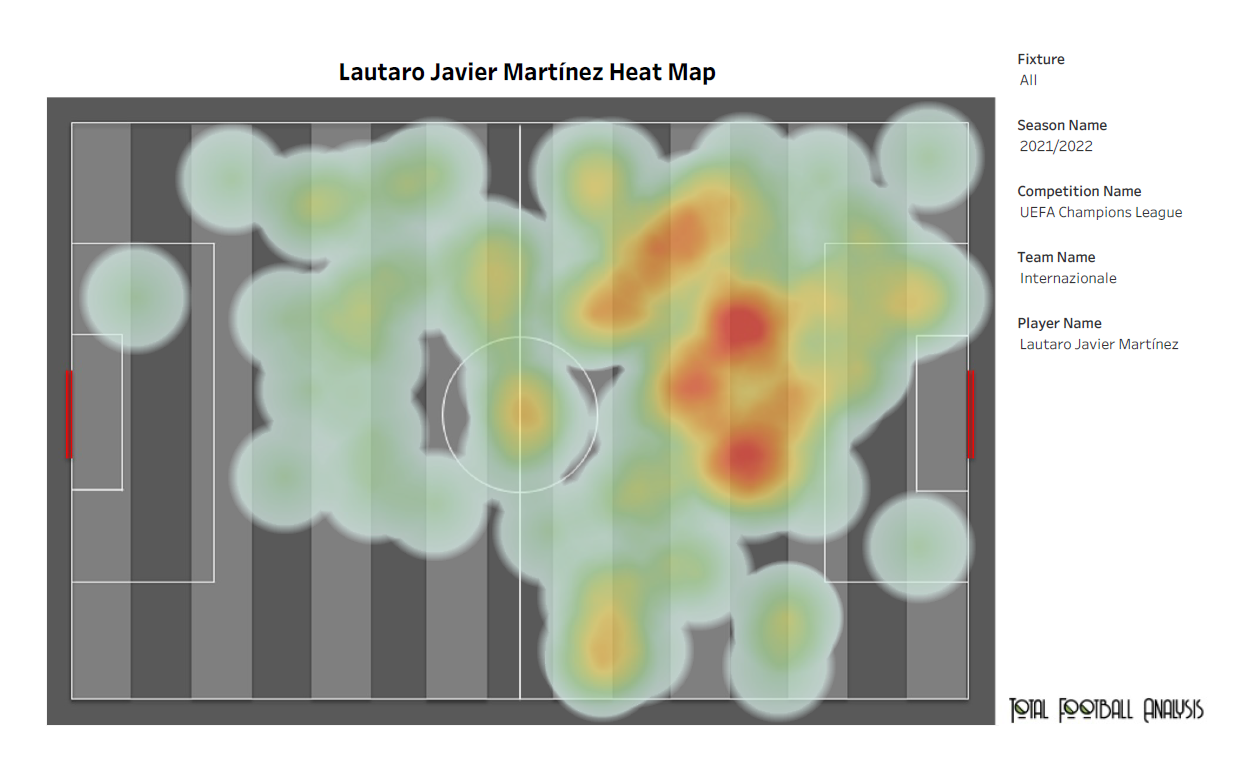 The above viz highlights Martinez’s area of activity on the pitch. We can see his extensive presence in front of the opposition goal and half-spaces on the left. He possesses the intelligence to position himself accordingly during transitions, and he can gauge the timing of the counterattack by occupying suitable positions near the opposition defenders. Martinez then tries to use their movements to his advantage. When isolated, he often positions himself at a distance from the opposition defenders. When the play is close to the final third, Martinez tends to drag the defenders to create space for his attackers or attack the space himself. In addition, he is capable of supporting his attackers by making decoy diagonal runs. The 24-year-old can be deployed as a centre-forward or as a number 10. 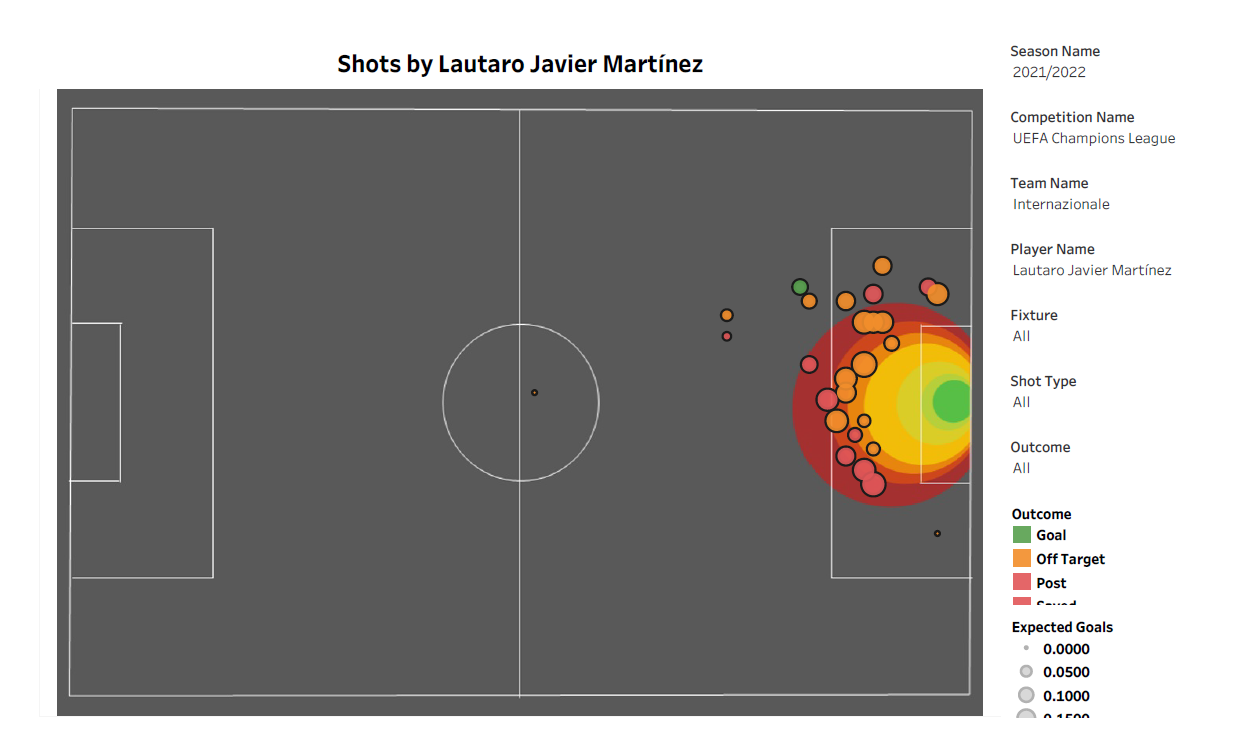 In the above ‘shot map’, we can see the locations where Martinez has taken his shots from. We can see that most of his shots are taken from inside the penalty box. When receiving a cross, Martinez prefers precision over power and tries to deflect the ball into the goal. Martinez usually holds off his run until the last moment, floating around the box to measure his opportunities.

Martinez could become an excellent addition for Simeone if a deal does go through in the summer. It would be interesting to see how Simeone sees the three-man attack consisting of Felix, Correa, and Martinez.