Since Kieran Trippier left for Newcastle United, Atletico Madrid have struggled at right-back. It has grown considerably worse since Šime Vrsaljko was allowed to leave on a free transfer to Olympiacos. Santiago Arias is the club’s only recognised right-back, who returned from a loan spell at Granada. While the Colombian could be a good deputy, Los Colchoneros clearly need an upgrade over him, whether it is for the short term or for the long term. For the former, one option could be Manchester City’s Kyle Walker. 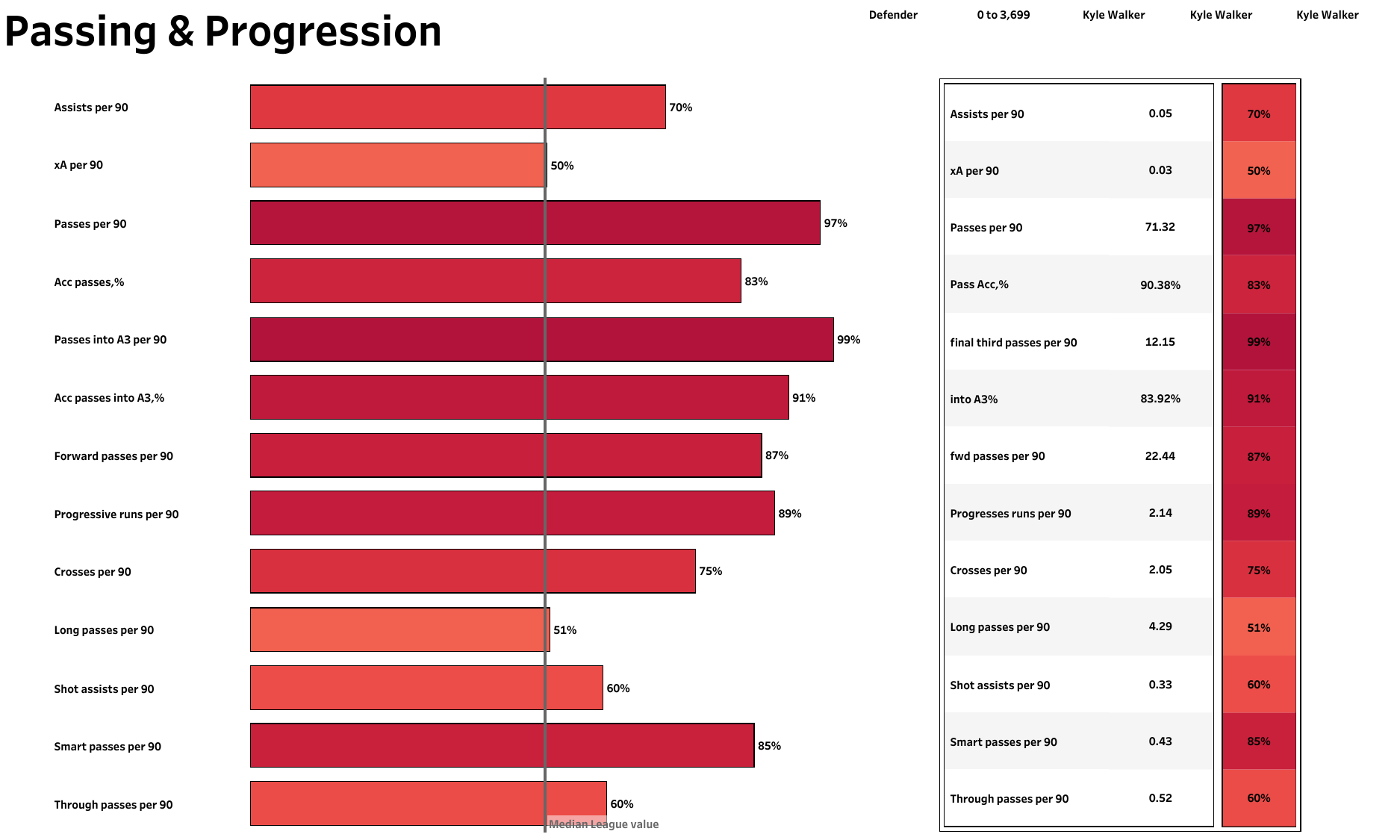 Walker appeared in 31 games for Manchester City last season in all competitions, including 20 in the Premier League. He registered two assists but failed to score even one goal during his 1,755 minutes on the pitch. He provided assists at a rate of 0.05 per 90, slightly higher than the xA per 90 of 0.03. The Englishman was a high volume passer, attempting more than 71 passes per 90 and above 12 passes into the final third, the latter putting him in the 99th percentile for defenders. He also ranked very high in pass accuracy, with 90% to his name. He made 2.14 progressive runs per 90, enough to place him in the top 11%. Additionally, he delivered 2.05 crosses per 90 and 0.43 smart passes per 90, being in the top 15% in the latter. 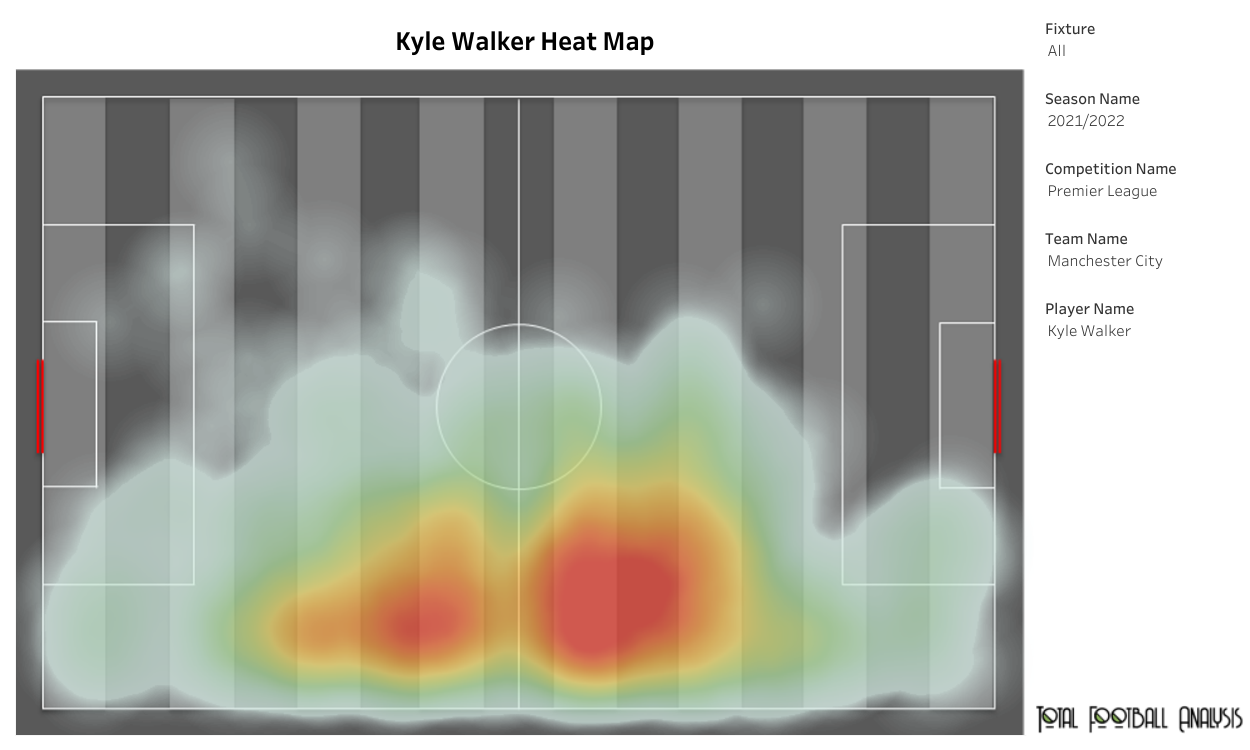 Walker ran up and down the pitch on the right hand side. He was decent at tracking back, but his attacking game was at a whole new level compared to his defensive ability. He regularly made overlapping runs whenever the right-winger cut inside to make space for him. As a result, he spent the majority of his time in the opponents’ half rather than in his half. Due to Pep Guardiola’s team dominating possession match after match, the former Spurs player had little opportunities to put up defensive numbers. He could attempt only 8.41 pressures per 90, 2.46 tackles and interceptions per 90, 1.23 clearances per 90 and 1.03 blocks per 90. 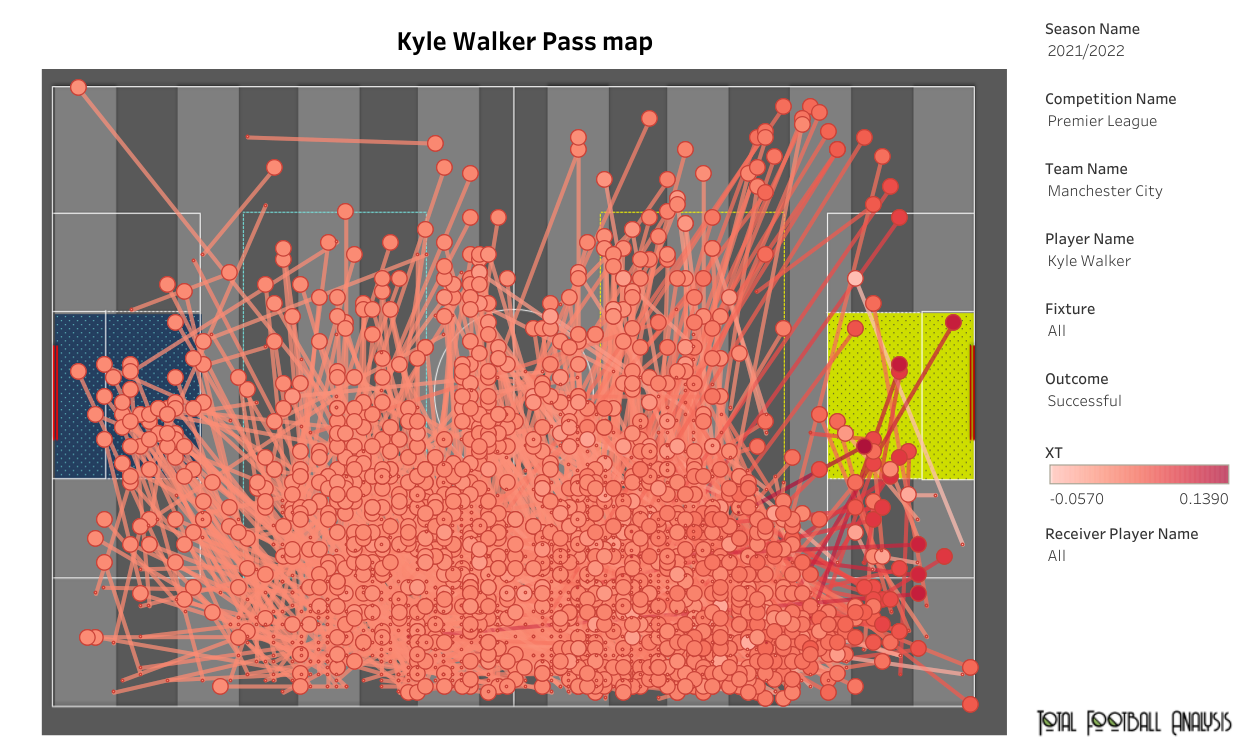 Walker was very reliable in his passing for Manchester City as he rarely misplaced passes in dangerous areas of the field. He was always looking to pass the ball forward at every opportunity. He completed 4.41 progressive passes per 90, a whopping 8.97 passes into the final third per 90, 1.03 passes into the penalty box per 90, 4.67 progressive carries per 90 and 1.85 carries into the attacking third per 90. He also generated 1.85 shot creating actions per 90.

Kyle Walker is aged 32, and his contract with Manchester City expires in June 2024. He would ideally be a short-term option at right-back for Atletico Madrid, but the Cityzens are having a dearth of full-backs (at left-back). So, City are unlikely to sell Walker this summer.