Ever since the departure of Kieran Trippier to Newcastle United, Atletico Madrid have been searching for a right-back as a replacement and as competition for Šime Vrsaljko. This area has been of particular concern for coach Diego Simeone. So, Los Colchoneros will have to strengthen this area of the pitch this summer. One option that is available domestically is the Villarreal right-back, Juan Foyth. The Argentine played a pivotal role in Villarreal’s run to the semi-finals of the 2021-22 UEFA Champions League. In this article, we will analyse Juan Foyth’s UCL campaign at Villarreal. 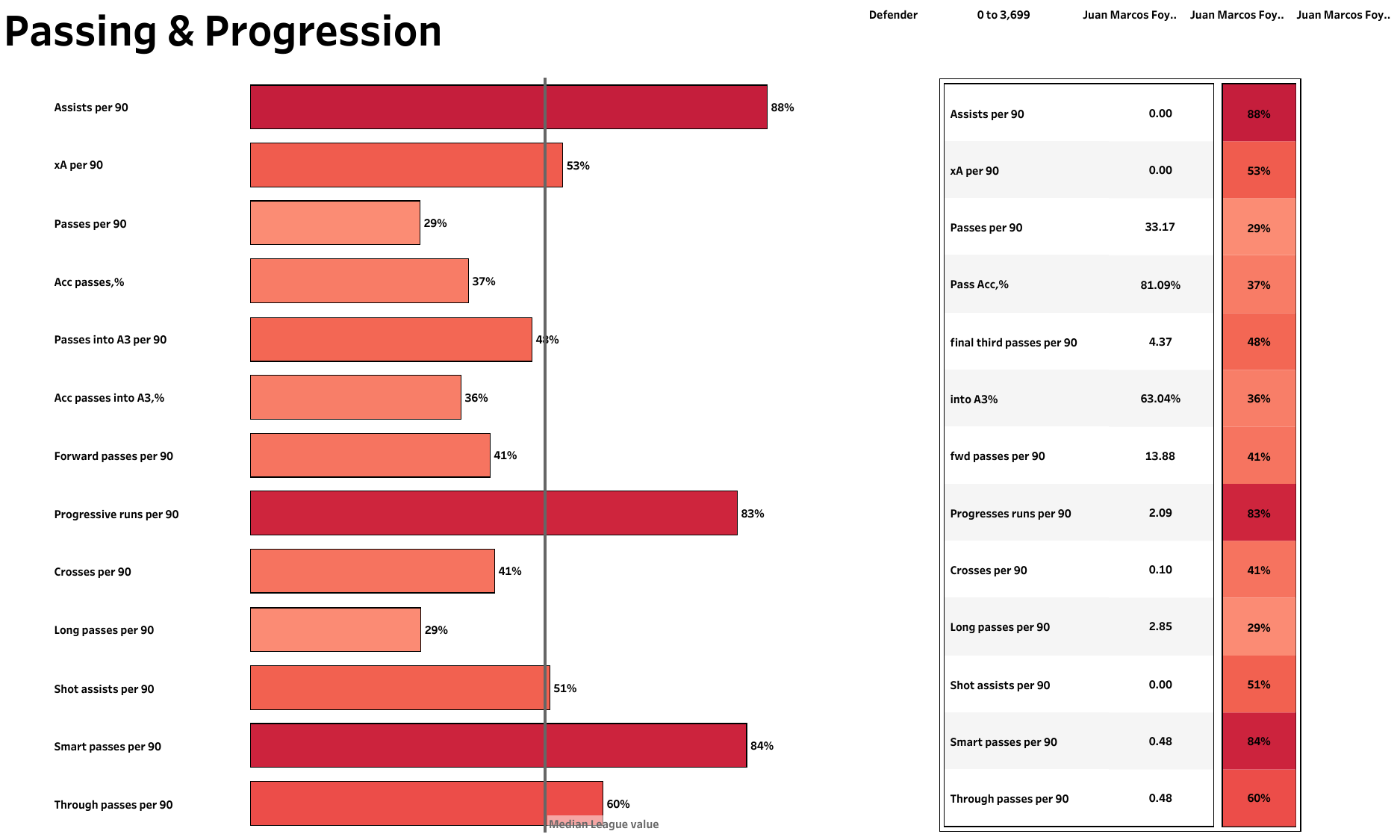 Foyth featured for Villarreal in 10 games of the 2021-22 UEFA Champions League as the Yellow Submarines were the surprise of the season, defeating Juventus and Bayern Munich in the Round of 16 and quarter-finals, respectively, to reach the semi-finals. Foyth played 890 minutes in the process. The Argentine attempted 33.17 passes per 90 at an accuracy of 81.09%. He made 4.37 pass attempts per 90 into the final third at a success rate of 63.04%. Foyth made 2.09 progressive runs per 90, which puts him in the top quintile for defenders. Similarly, he also made 0.48 smart passes per 90, ranking him in the 84th percentile for defenders. 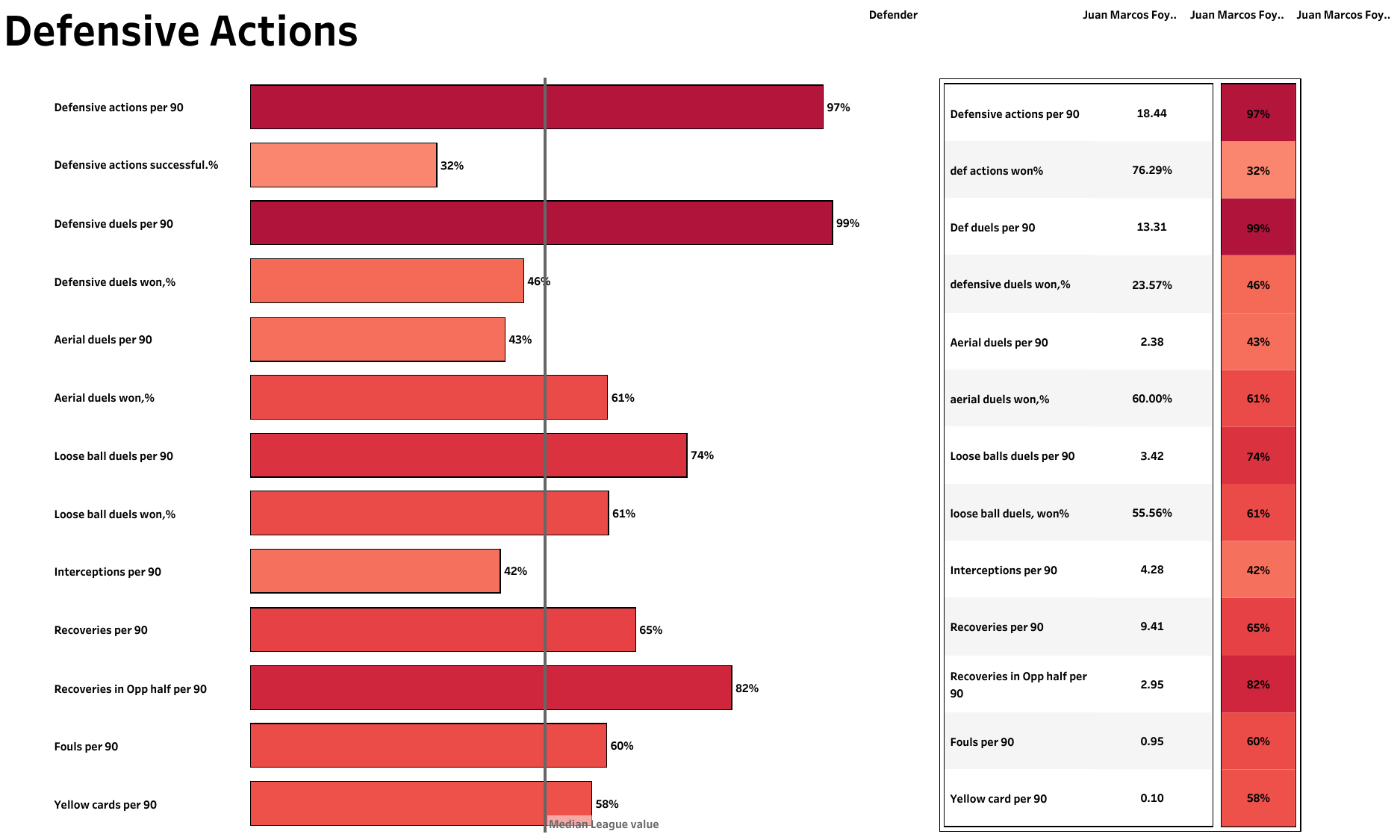 Foyth attempted 18.44 defensive actions per 90 for Villarreal in the UEFA Champions League campaign just gone by, putting him in the top 3% in this category. He won just over three-fourths of these defensive actions. With 13.31 defensive duel attempts per 90, the Argentine ranks in the top 1% for defenders in this category. His success rate was 23.57%. With a height of 187 cm, he was able to win exactly 60% of his aerial duels for the Yellow Submarines. Foyth also attempted 3.42 loose ball duels per 90. He completed 4.28 interceptions per 90, 9.41 recoveries per 90 and 2.95 recoveries per 90 in the opposition’s half, the latter of which puts him in the upper quintile. 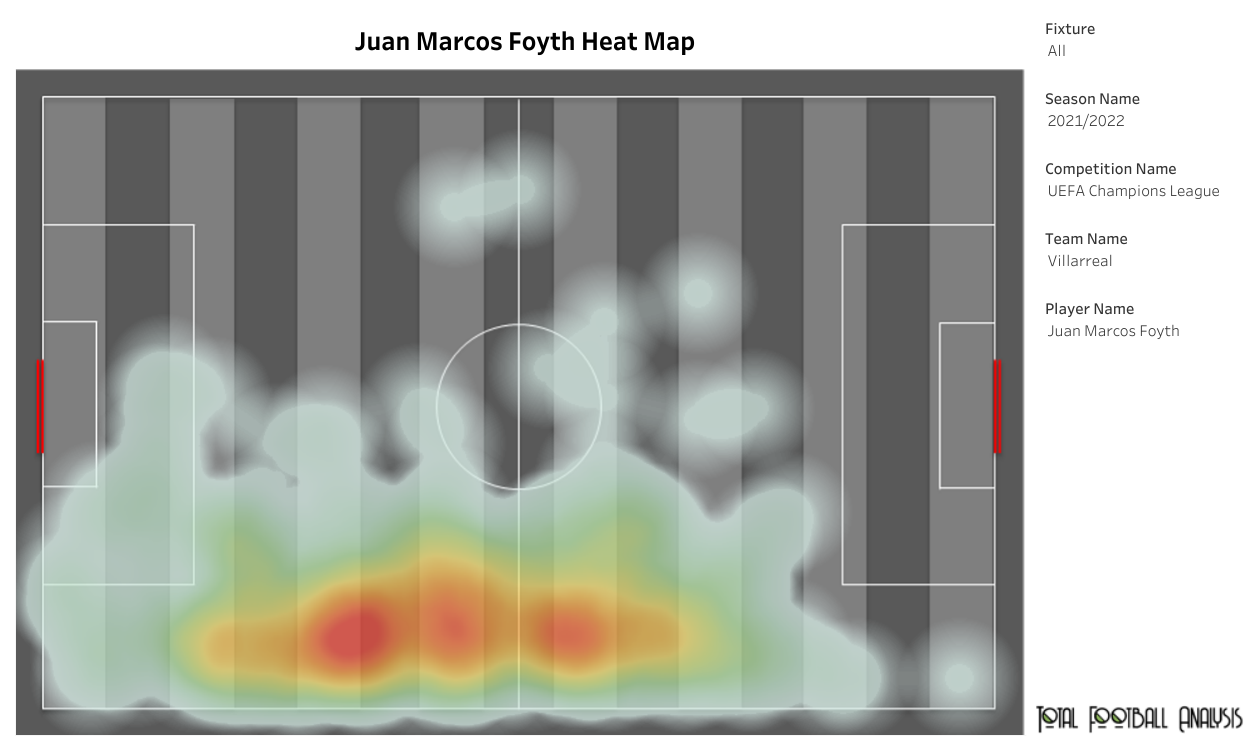 Shown above is Foyth’s heat map. As a right-back, he was influential in the defensive third as well as in midfield. However, he also made several overlapping runs into the final third after the space was created by the right-sided winger or midfielder. With the ball at his feet, Foyth completed 4.5 progressive passes per 90, three passes into the final third per 90 and 2.83 progressive carries per 90. Defensively, the Argentine attempted 21.8 pressures per 90 (of which 6.36 were successful), 6.77 tackles and interceptions per 90, 2.22 clearances per 90 and 1.52 blocks per 90.

Juan Foyth helped Villarreal win the Europa League in 2020-21 and reach the Champions League semi-finals in the recently concluded UCL. However, the odds of Atletico Madrid signing the 24-year-old look slim at best, as he stated that he is happy at Villarreal under Unai Emery.