With Kieran Trippier departing for Newcastle United in January 2022 and Šime Vrsaljko leaving this summer for Olympiacos, Atletico Madrid have been left weak in the right-back position. With the new LaLiga season starting in just four weeks’ time, Los Colchoneros are yet to sign a right-sided defender that is of real quality. And in the top five leagues across Europe, there is a real dearth of quality right-backs. However, outside the top five leagues, there are a few of them that can do the job for Diego Simeone’s side. One such option is Celtic’s Josip Juranović. 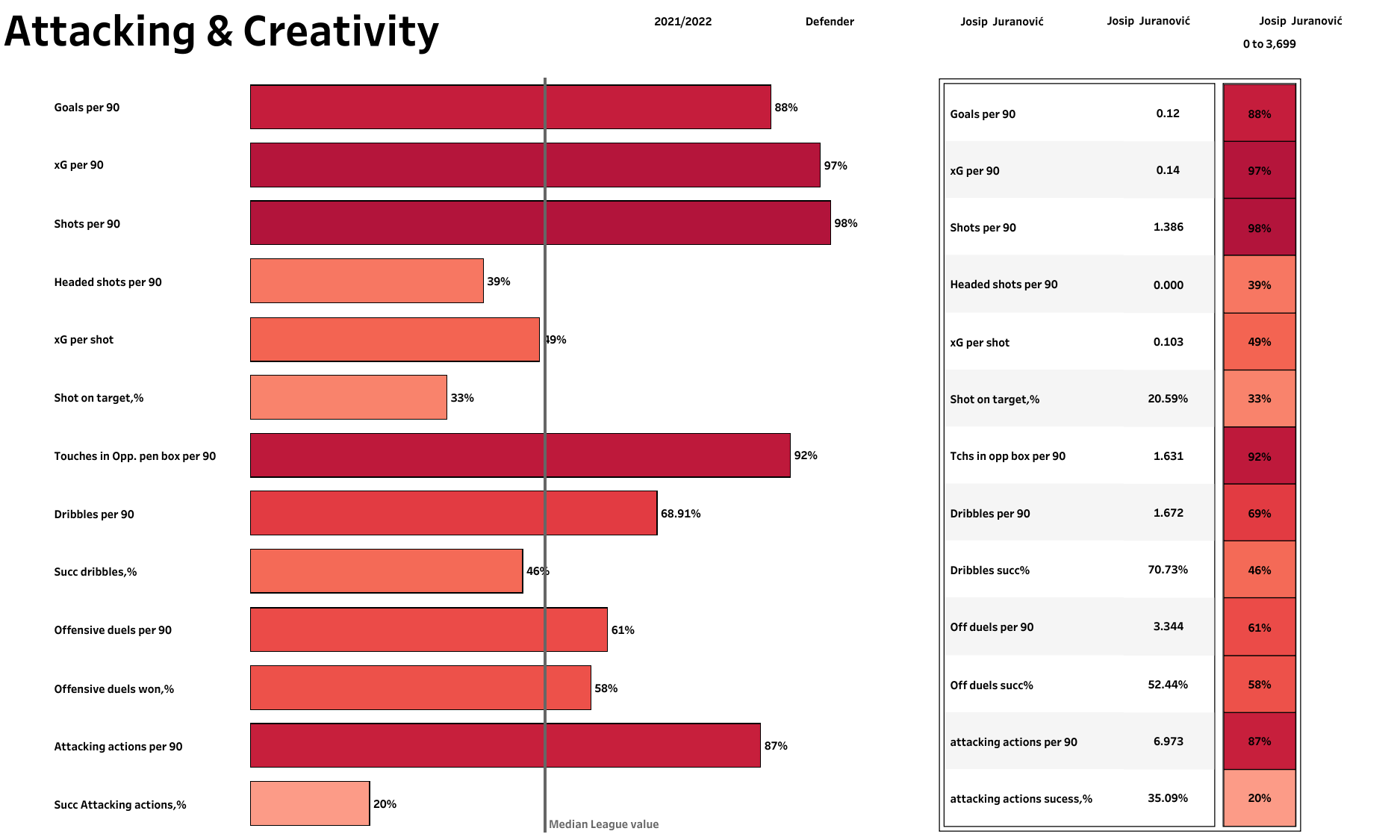 Juranović made 35 appearances across all competitions for Celtic last season, which included 26 in the Scottish Premiership. He scored thrice and assisted once in 2,061 minutes of action. He generated 0.14 xG per 90, which put him in the top 3% among defenders. He fired off 1.38 shots per 90, though only 20.59% of these tested the opposition goalkeepers. With 1.63 touches in the attacking penalty area per 90, the Croatian international was placed in the 92nd percentile among defenders. He was also involved in nearly seven attacking actions per 90 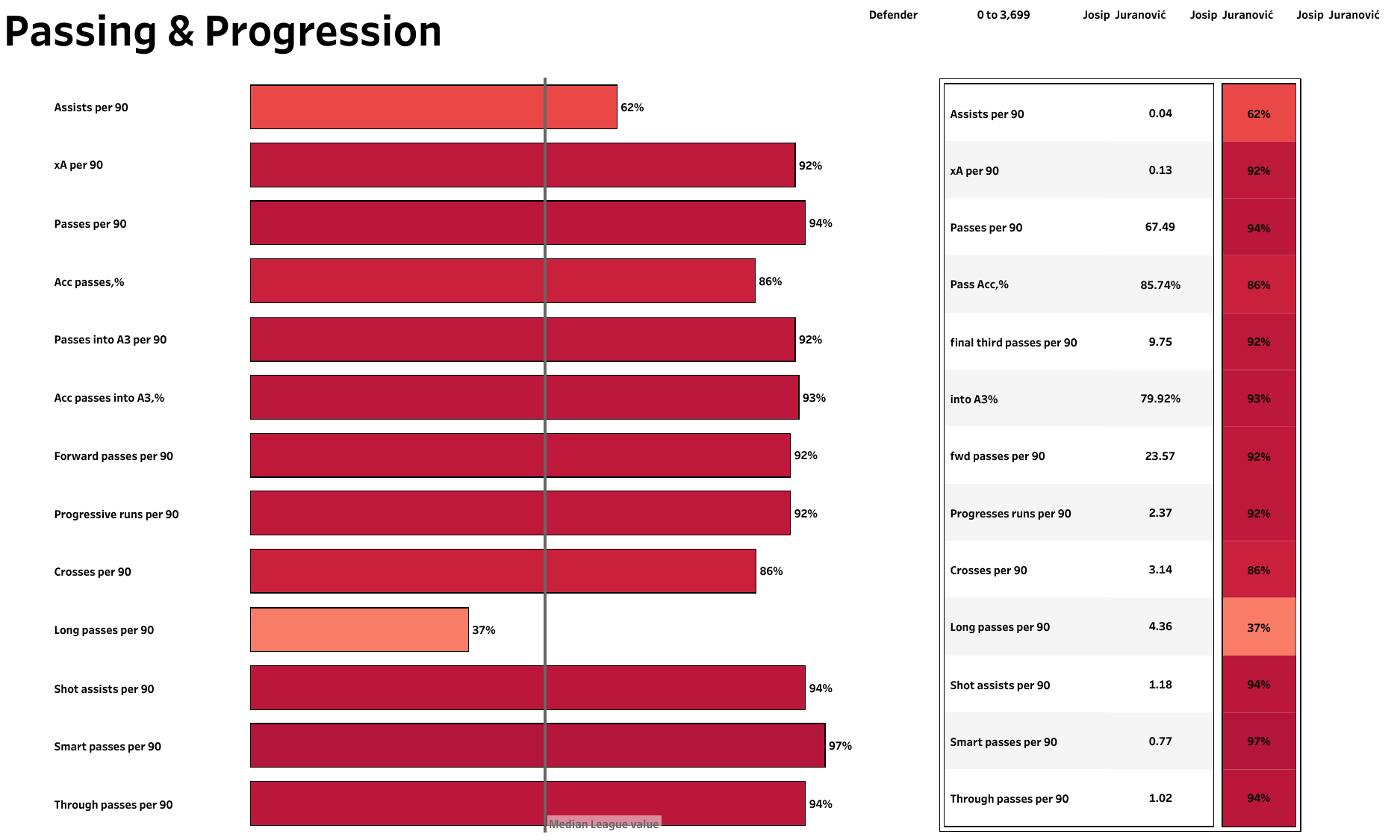 Juranović also had two assists in addition to his three goals. However, despite having an xA per 90 of 0.13, he only provided 0.04 assists per 90. He was a key man in Celtic’s build-up play, averaging more than 67 pass attempts per 90 minutes with a very high accuracy of 85.74%. His ability to progress the ball was superb, averaging 9.75 passes into the final third per 90 minutes with an accuracy of slightly under 80%. The Croatian was an attacking danger down the flanks, with 2.37 progressive runs per 90 and 3.14 crosses per 90. He also had shot assists per 90, smart passes per 90, and through passes per 90 in the 94th percentile or above among defenders. 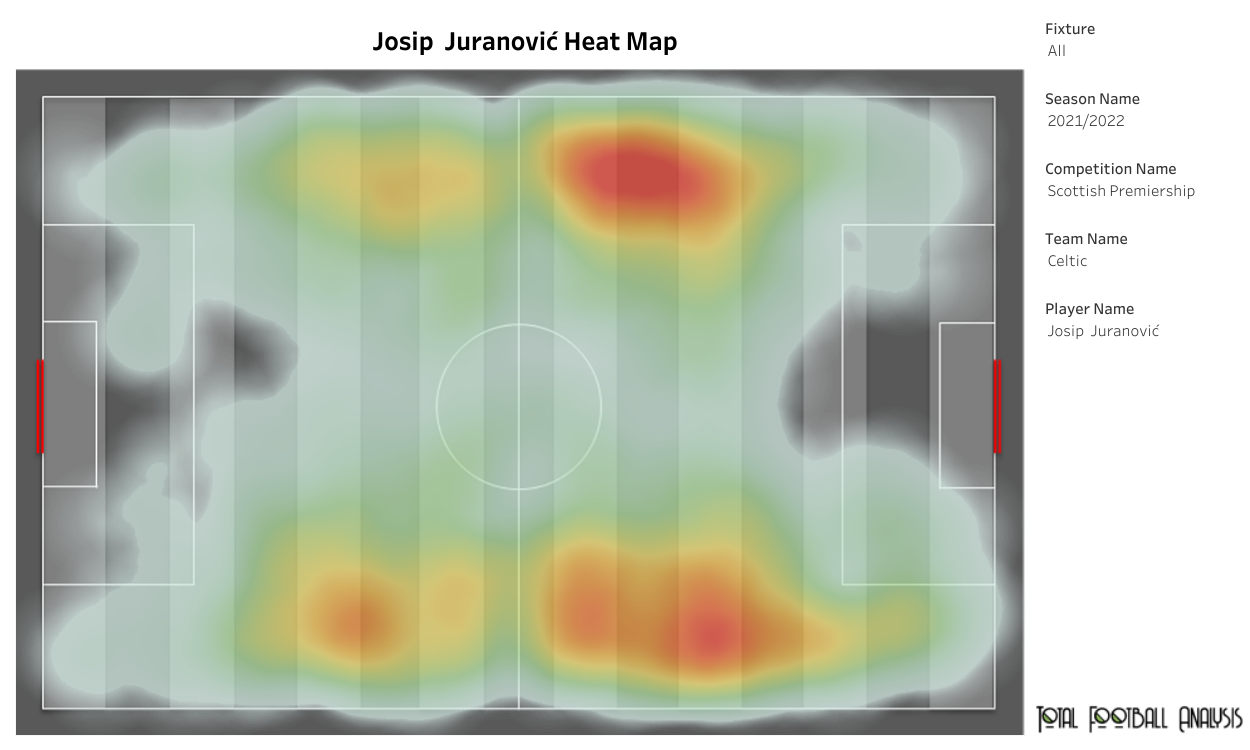 Juranović demonstrated his flexibility and offensive desire for Celtic, as seen by the heat map above. He appeared 12 times as a right-back and nine times as a left-back for Ange Postecoglou’s side. The Croatian took 36 shots, eight of which were on target. He accomplished 98 crosses and 50 tackles and interceptions in the season. 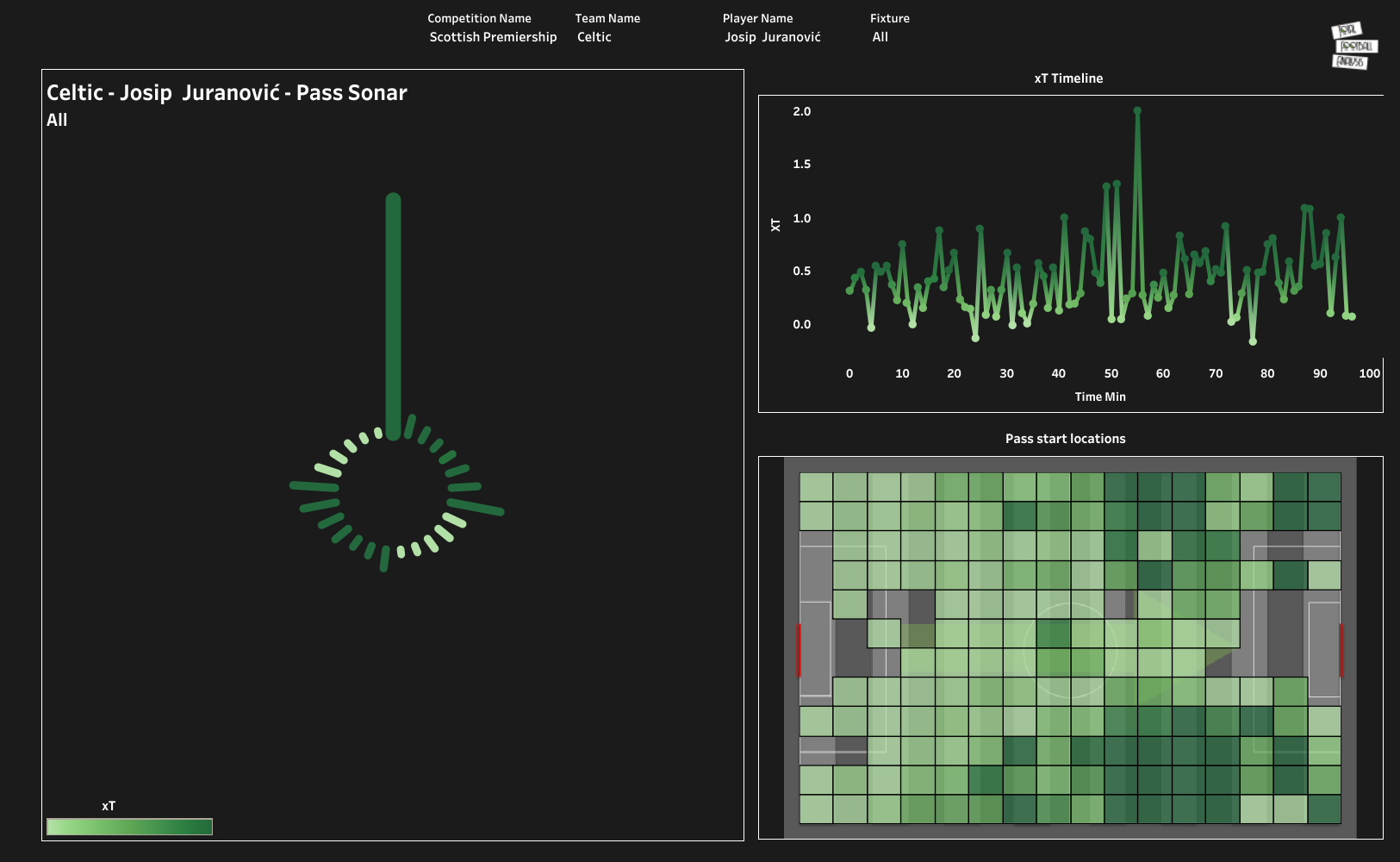 Juranović was able to generate threats from both wings, as seen in the above image, by providing crosses, through balls, and carries into the opponents’ penalty area. His typical xT score was about 1.0, occasionally nearing and exceeding 2.0.

Josip Juranović took little time to settle into the system of Ange Postecoglou even though he missed the last six games of the league season. His admirable performances have attracted interest from Atletico Madrid. Even though Celtic will demand a far greater fee than his market value, Los Colcheneros can afford to pay that. However, if Juranović does sign for Atletico Madrid, expect him to take time to settle at the Metropolitano due to a radical change in the system, going from possession-heavy Postecoglou to defence-first Simeone.