Since he was appointed as Atletico Madrid’s head coach in 2011, Diego Simeone has always focused on defensive solidity as his team’s foundational philosophy. Under Simeone, Atletico have been direct, intense, and defensively sound. While the Rojiblancos have been criticized by many pundits for not winning their games convincingly and constantly edging out narrow 1-0 victories, more often than not, they get the job done. Simeone has always prioritized defending in his tactics, and his side is perhaps one of the best in Europe when it comes to standing firm at the back.

It’s no wonder that Atletico have consistently found defenders of the highest quality. Their La Liga triumph last season was built upon the current crop of defenders, including Stefan Savic, Felipe, Hermoso, and Jose Gimenez.

Since joining Atletico Madrid in 2013 from Danubio, Gimenez has had to endure frequent ups and downs in his career. Although he has matured a lot as a defender, his frequent injuries meant that the Uruguayan defender has struggled to nail down his spot in Simeone’s starting XI. Despite his poor injury record, Gimenez has been named in Atletico’s starting line-up whenever he is available. So far, he has made 248 appearances for the Colchoneros across all competitions, scoring nine goals and adding a further eight assists.

This season, Gimenez has made 11 appearances in La Liga and five in the Champions League. Despite losing three straight matches in the group stages of the Champions League, Atletico have managed to scramble their way through to the knockouts. Simeone would be looking to count on his current crop of defenders to provide him with the defensive solidity if his side are to make an impression in the knockout stage, and Jose Gimenez would be counted by his manager if he remains available.

Let’s take a look at some stats to gauge whether the Uruguayan defender can marshal Atletico’s defence in the knockouts. 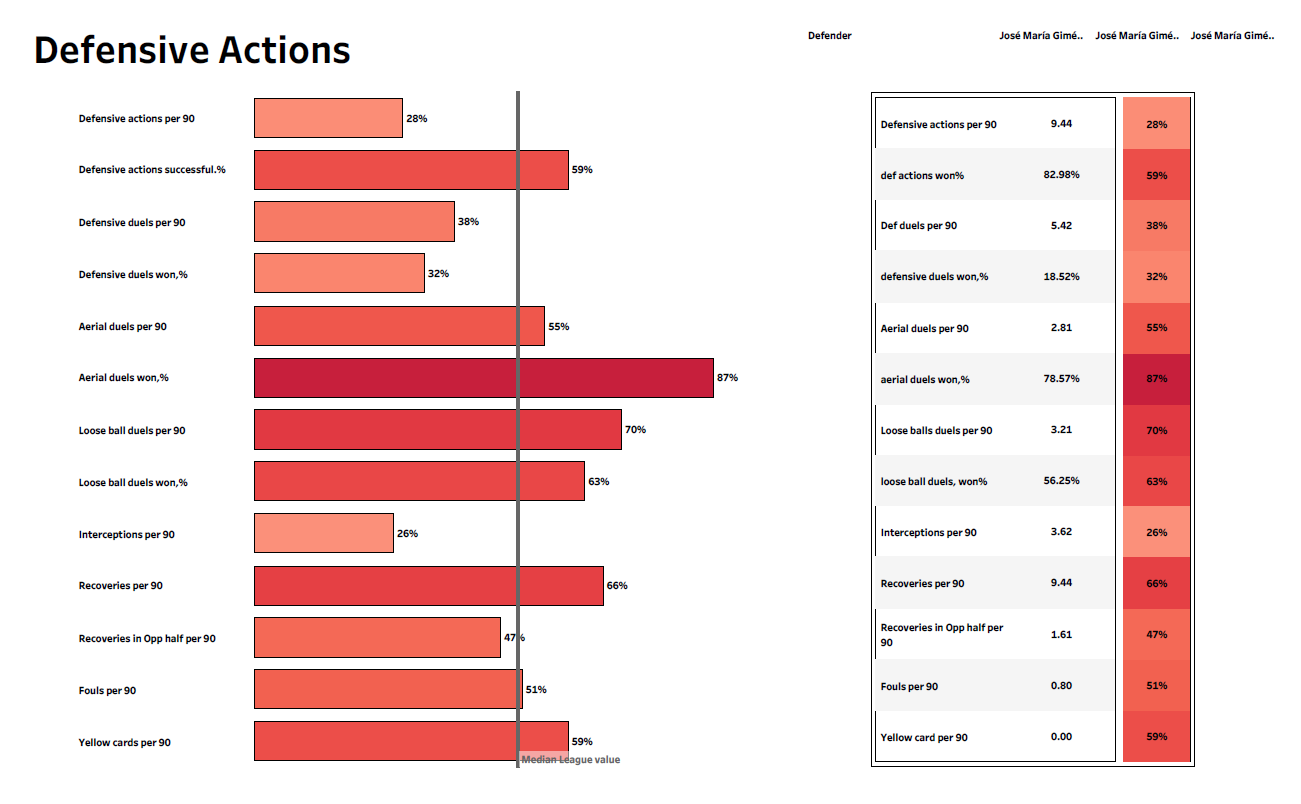 Gimenez’s defensive stats have mirrored Atletico’s overall defensive record in the Champions League this season. In six group stage matches, Atletico have conceded eight goals, five of which they conceded in two games against Liverpool. In the 0-2 away loss against Liverpool, Gimenez struggled to keep up with Liverpool’s attacking speed and tempo. Nonetheless, the majority of his defensive stats surpass the league median value, with the most notable stats being aerial duels won and recoveries per 90. Gimenez is a robust defender who combines his power and pace to great effect. He thrives in physical battles and one-on-one situations. 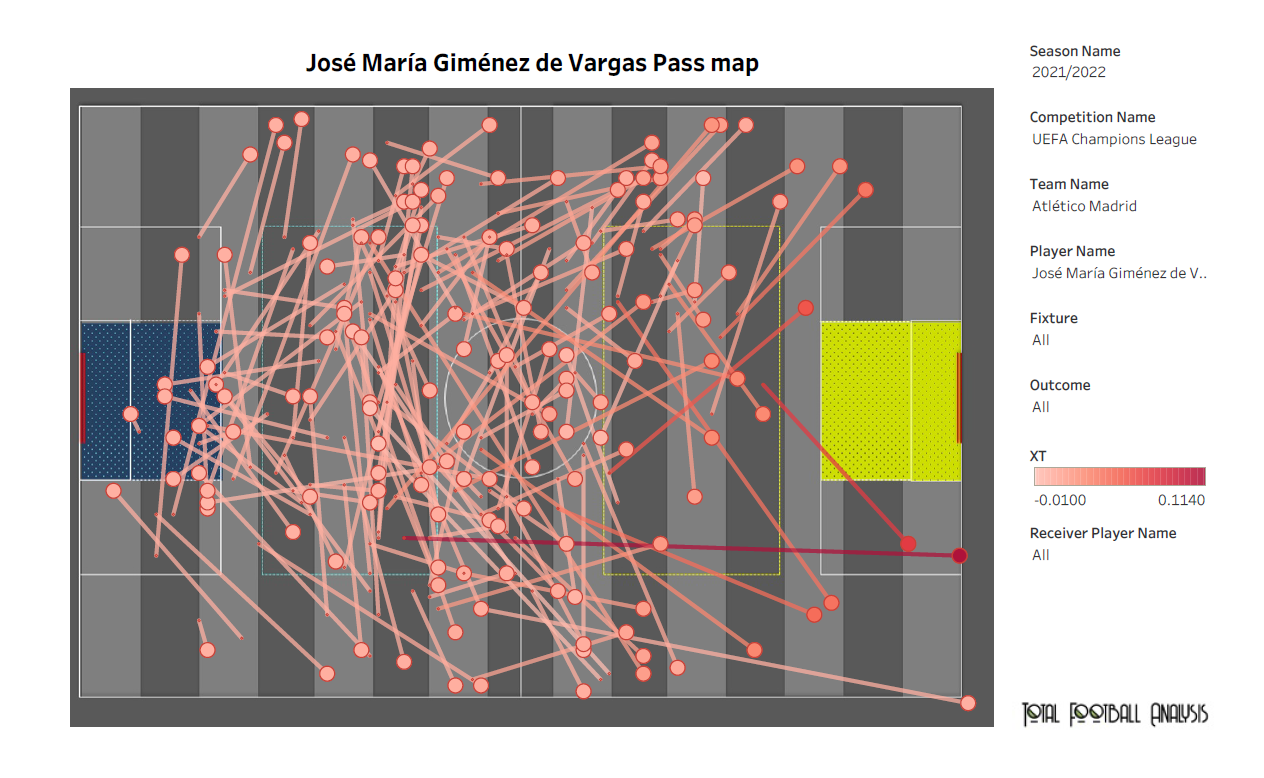 Gimenez’s pass map displays the location where the defender has delivered his passes. Amongst Atletico’s brilliant defenders, Gimenez is perhaps the most balanced out of all. In addition to his defensive tenacity, Gimenez possesses impressive ability on the ball, and his distribution is wide-ranging, as evident from the pass map. The Uruguayan has distributed multiple long balls near the opposition box in his five appearances in the group stage. 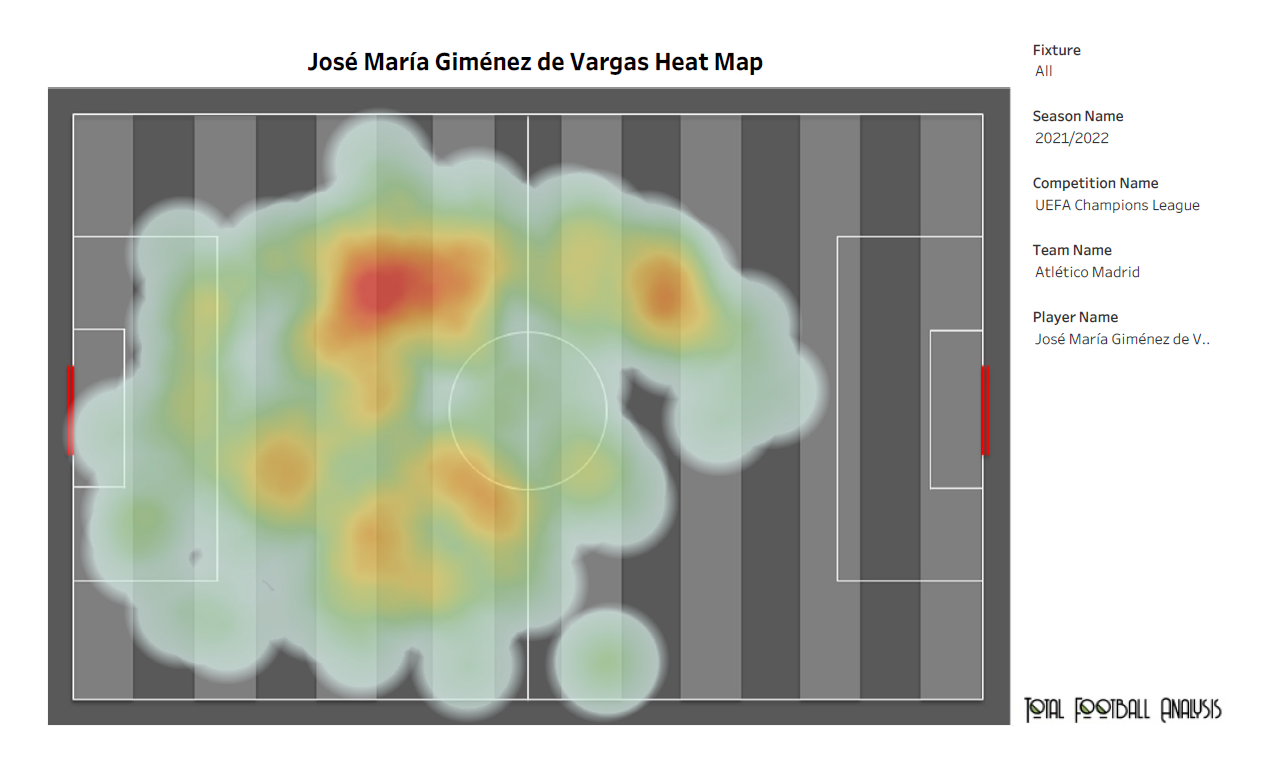 His heat map indicates the location where he is most active on the pitch. Gimenez. This season Simeone has utilized both a back three 3-1-4-2 and his usual 4-4-2 formation. In the back-three system, Gimenez has been deployed as a right-centre-back, while in the 4-4-2 system, the Uruguayan has featured as a left-centre-back. The above heat map also highlights that Gimenez has made somewhat frequent runs on the left wing in the opponent’s half. 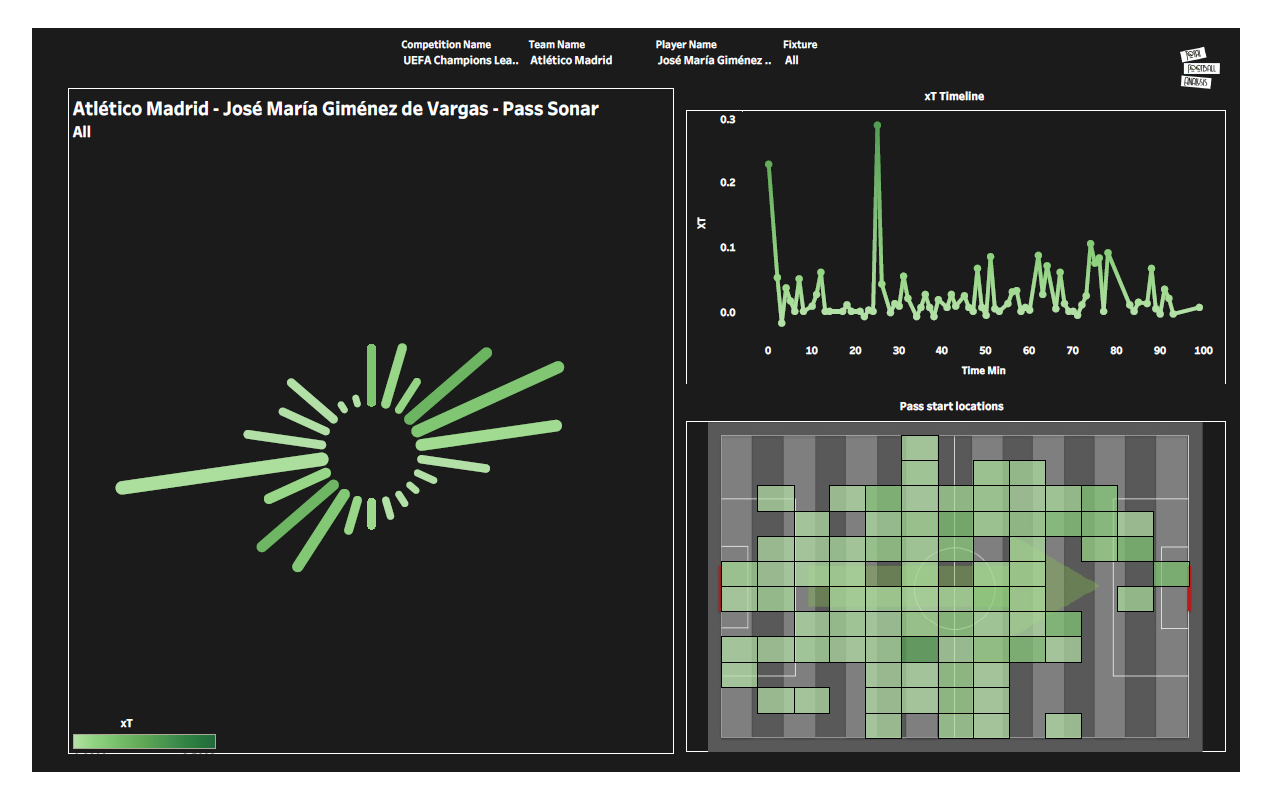 Gimenez’s pass sonar indicates the directionality of his passes and the typical length of those passes. We can gauge from the pass sonar that his ball distribution has been impressive, and he has made plenty of forward passes.

Gimenez makes up for his lack of positional awareness, and at times, excessive aggression with his defensive robustness and explosive pace. Despite his frequent injuries since his arrival at Atletico Madrid, he has been featured in the starting XI whenever he is available. Although his defensive stats are slightly underwhelming this season, as has been the overall form of his side, Gimenez, nevertheless possesses the grit and tenacity that Simeone would be looking for from his side in the knockouts.

Transfer Talk: Could Dybala provide Simeone with the attacking edge?

Under the microscope: Ambitious Angel – Can Angel Correa rise up for Atletico in the knockouts of the Champions League?

Transfer Talk: Could Dybala provide Simeone with the attacking edge?

Under the microscope: Jose Gimenez – Atletico’s defensive wall – Can...

Under the microscope: Ambitious Angel – Can Angel Correa rise up...

Reaction to the Madrid derby from the Atletico side

We use cookies to ensure that we give you the best experience on our website. If you continue to use this site we will assume that you are happy with it.Ok