Since his move to Atletico from Benfica, a transfer that made him the Rojiblanco’s most expensive signing, Joao Felix, has been subjected to criticism and doubts over his consistency in the light of multiple injuries that he has suffered. The 22-year-old forward has featured in almost 100 games for the Colchoneros, scoring just 22 goals, and registering 12 assists. In the current season, Felix has made 13 appearances in LaLiga and four in the Champions League. Although he has suffered from multiple injuries since the start of the season, Felix has found himself on the fringes of the team even when he is fit and available, with Simeone preferring the likes of Griezmann, Suarez, Matheus Cunha, and Angel Correa before him.

Amidst multiple reports linking him with a move away from the Wanda Metropolitano, most recently to Barcelona, Atletico have maintained that the 22-year-old forward is staying, and the club values his talent. Simeone believes that Felix remains an important member of the squad and will eventually come through for them. Although for many pundits and fans, one thing remains clear. His attacking output for a player of his price tag has been underwhelming.

For much of the current season, Felix has been confined to substitute appearances, although, he has started to feature regularly in the recent games. Felix has performed well in the previous games, and his creativity has led many fans to believe that he can provide Atletico with the attacking incisiveness that they have been missing this season.

Let’s take a look at his stats from the Champions League to understand whether the Portuguese can rise back to prominence and nail his spot in Simeone’s starting XI. 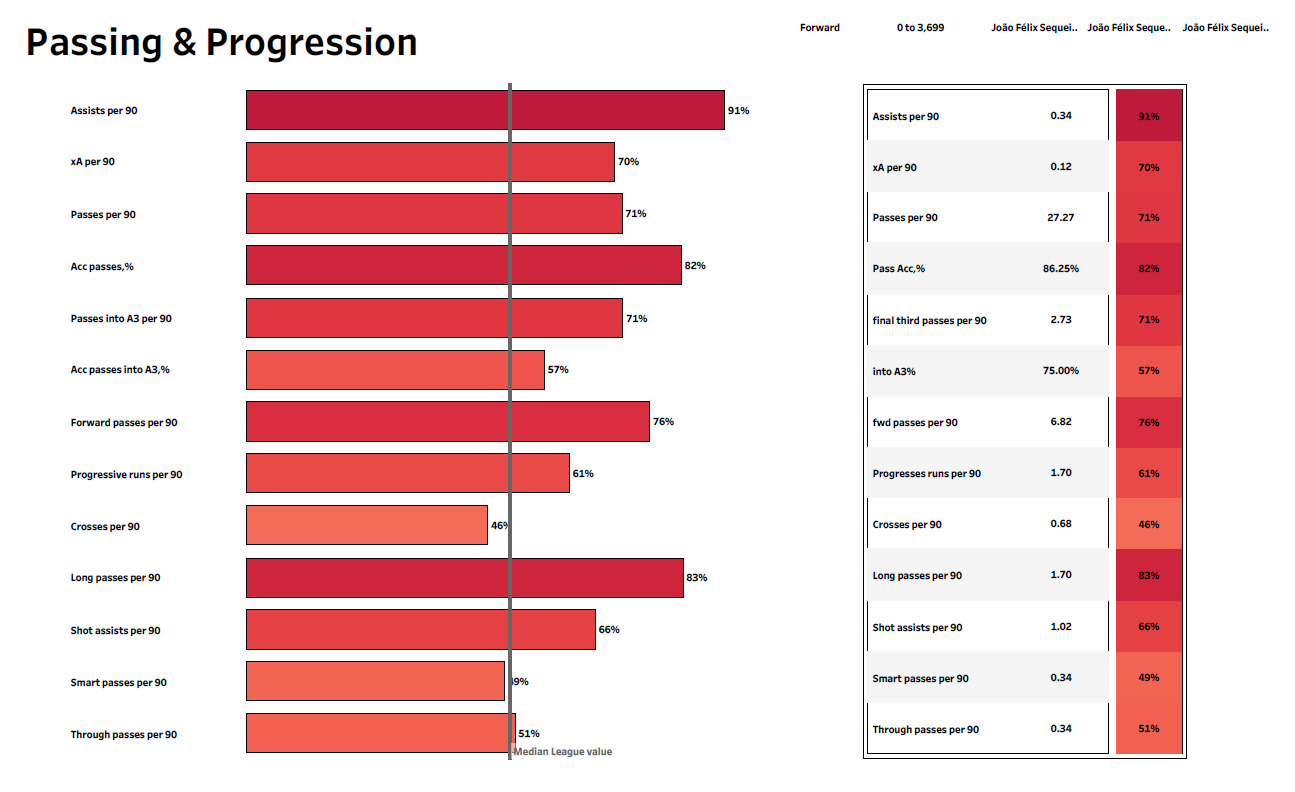 In the above viz., we can see that Felix has fared well in terms of the majority of passing and progression stats. His passing accuracy stands at an impressive 86% and he has ranked highly in terms of average long passes as well. While there are still many areas where the Portuguese has lacked this season, Atletico, in general, have struggled to perform this season. Simeone’s inability to evolve the back-three formation has been a source of concern, and he has started to revert to his preferred 4-4-2 system. 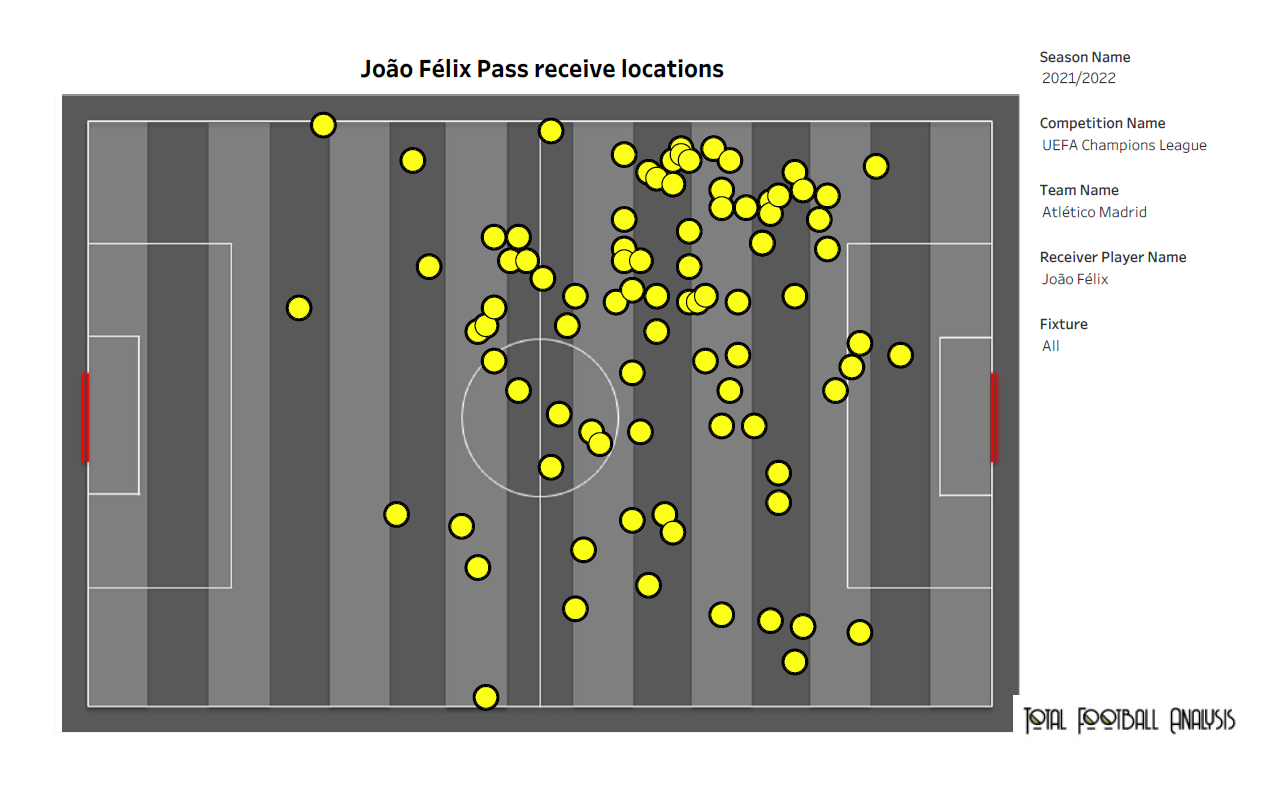 Felix has been known for his mobility on the pitch. He can pop up in multiple areas in the opposition half, helping his team progress and create chances. His reading of the game is brilliant, and his decision-making allows him to choose whether to drag the defenders wide or to play a pass in between the defensive lines. Felix’s movement in the opposition box is always a cause of concern for the opposition defender. In the above viz., we can see that Felix has dropped to multiple areas on the pitch to receive his passes, which further highlights his mobility. 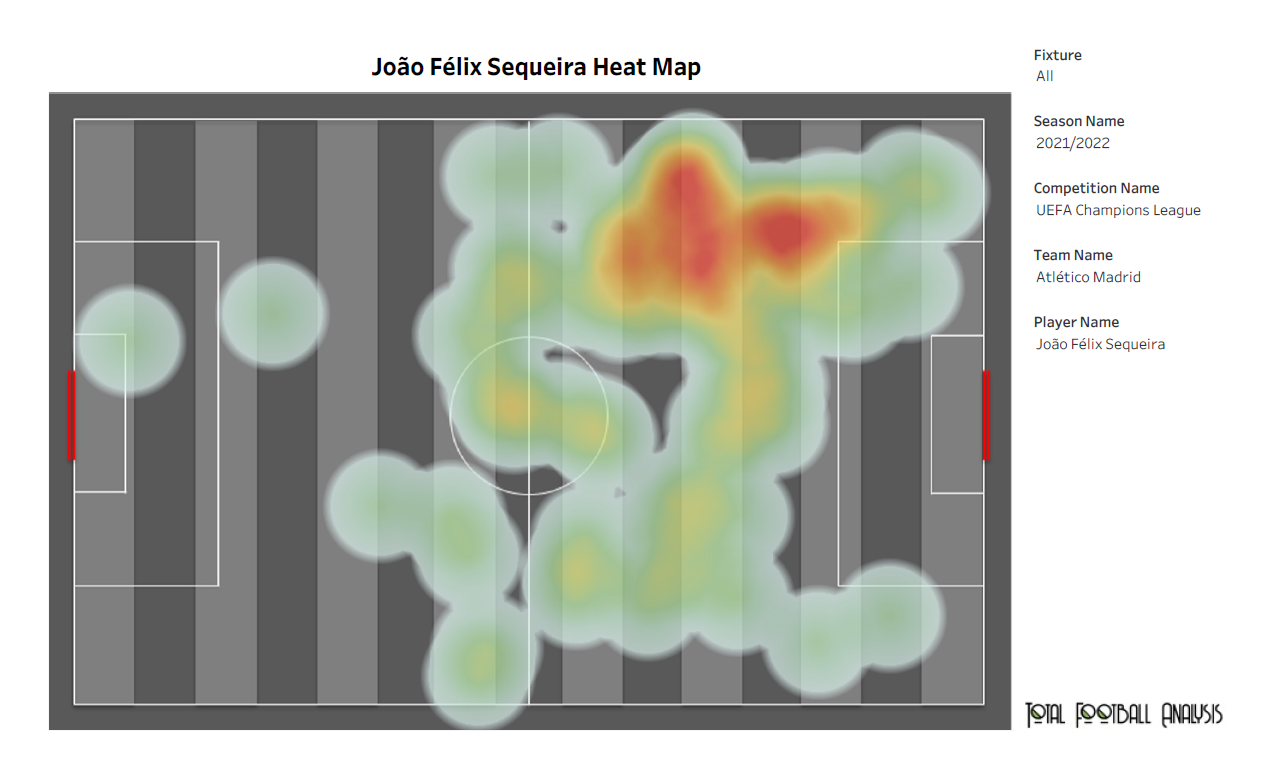 Felix has been deployed as a second striker alongside Suarez or Griezmann this season. The Portuguese is usually active on the left side of his team’s attack while he frequently moves closer to central positions when the play is near the opposition box. His technique while receiving the ball is impressive, and he is comfortable in one-on-one situations. We can see from the above heat map that Felix likes to drop deep to receive the ball near the centre or in the half-spaces. In addition, his movement around the box is also evident from the above viz.

Based on the above stats and his recent performances, it can be concluded that Felix remains a technically-gifted player, who is excellent with his passing and movement on the pitch, despite underperforming this season. His struggle with injuries is a cause for concern, but he is capable of finding his feet again and rising back to prominence in Simeone’s starting XI.