Atletico Madrid fans would be disappointed by their side’s recent 1-1 draw against Manchester United in the first leg of the Champions League Round-of-16. Despite putting up a dominant performance and being the better side for the majority of the match, Atletico were unable to take advantage of the return leg. In a match that saw a remarkable diving header from Joao Felix, the Rojiblancos’ best performance of the night arguably came from the midfield, as Geoffrey Kondogbia produced a dominant display in the engine room of the pitch.

The Colchoneros’ midfield has been a problematic area for Simeone all season. In addition to their already lacking defensive stability, the midfield has added to Atletico’s inconsistent displays. However, without Koke, whose form has declined slowly over the past couple of seasons, Atletico’s midfield looked formidable. Along with Hector Herrera in the midfield, Kondogbia produced a complete midfield performance. He excelled in his defensive duties, consistently pressing the opposition and winning back possession.

Kondogbia was impressive in Atletico’s recent 2-0 win over Celta Vigo in LaLiga. He was industrious in the midfield with his pressing and tackles, aiding his side to create chances by winning back possession. So far, he has made 19 appearances in LaLiga and six in the Champions League.

Let’s take a look at his stats from the Champions League to gauge the performances of Simeone’s rising midfield general. 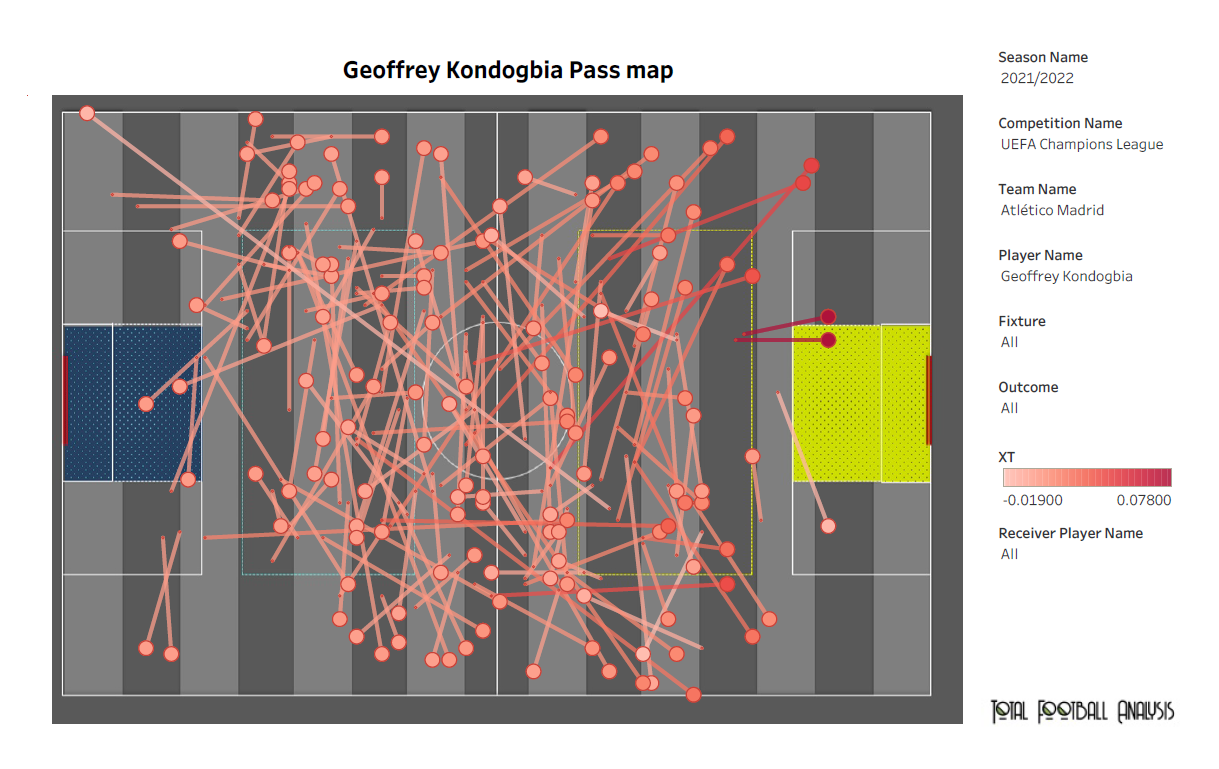 In the above viz., we can see the wide range of passes that Kondogbia has delivered in various areas of the pitch. He is adept at winning back possession and can distribute the ball to his side’s advantage. He is strong in short passes and has improved in his long passes in recent seasons. In the recent game against Celta Vigo, the 29-year-old midfielder made two assists through impressive passes over the opposition defense, further indicating the improvement in his passing ability. However, he is measured in his use of the ball and prefers to make short passes. 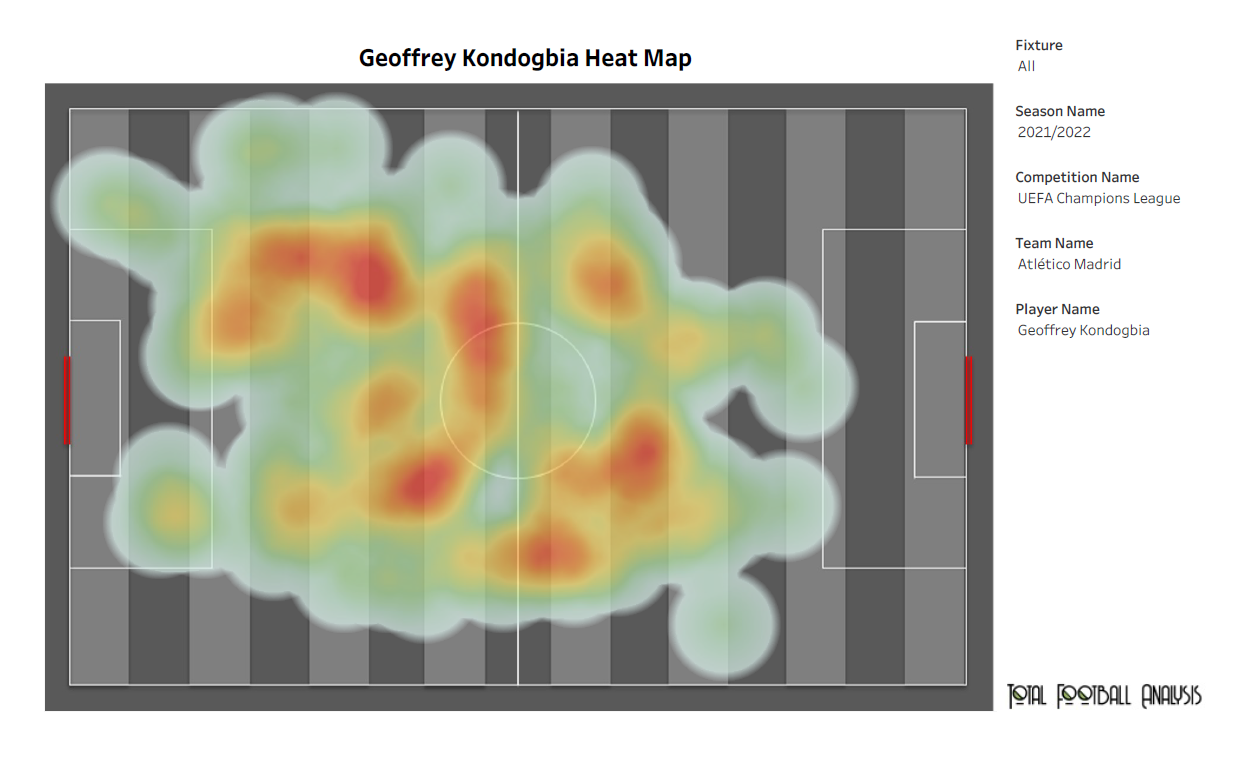 The above heat map highlights the locations of the pitch where Kondogbia is most active. He is usually cautious with his position and stays near his half and in the midfield, where he can dictate the play. However, we can see in the above viz. that he has been present in the opposition’s half as well. In the recent games, Kondogbia has been deployed as a defensive midfielder in Simeone’s 3-5-2 formation. Kondogbia possesses an impressive upper body strength, which he utilizes to great effect. His strength was in full display in the recent draw against Manchester United, where he won multiple duels by turnovers, with the opposition failing to outmuscle him. We can see from his heat map that he has been mostly active in front of his defense. 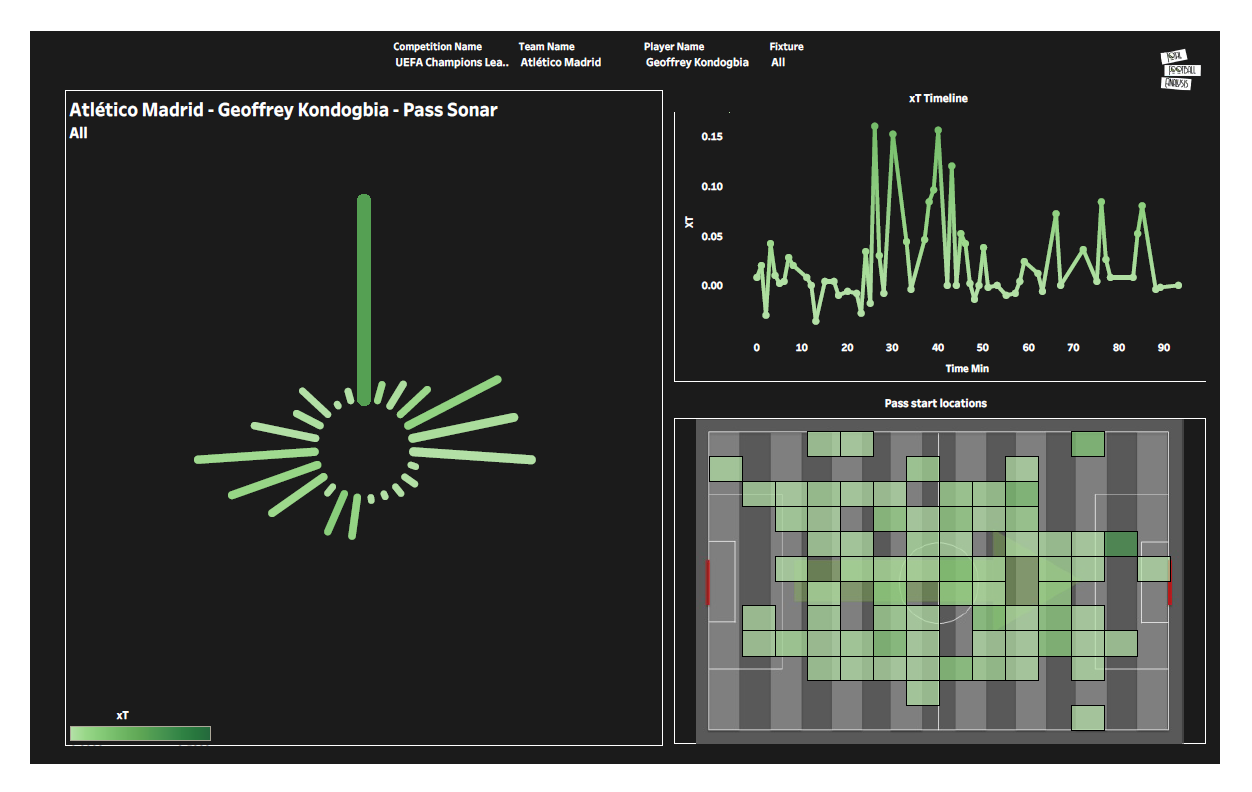 In the above viz., we can see the directionality of Kondogbia’s passes and the expected threat associated with those passes. His ‘pass start locations’ further highlight the locations of his passes. The 29-year-old utilizes his tenacity and dynamism in the midfield and is not afraid of going into challenges. This season in the Champions League, he has a pass success rate of 83.4%. In addition, he has averaged more than one aerial duels won per match.

In the absence of Koke, Kondogbia has demonstrated the tenacity and industriousness that Atletico had been lacking this season. His recent performances and stats indicate that he is capable of aiding the Rojiblancos’ issues in the midfield.