For many seasons now, Atletico Madrid’s defensive solidity has been a product of the combined efforts of all members. Although this season, things haven’t gone according to Simeone’s plan. Despite deploying multiple different combinations at the back, the Argentine manager has been unable to find a solution that works. As a result, Atletico have uncharacteristically conceded more goals this season at this stage than they have in the previous seasons.

While they aren’t faring worse in terms of shots conceded than in the previous seasons, the Rojiblancos are conceding more goals from fewer shots on target. Atletico, specifically, have failed to defend crosses from the flanks. One of the defenders who has looked a shadow of his former self is Felipe Monteiro.

Felipe has featured in eight of Atletico’s 11 defeats this season. In addition, the Rojiblanco’s concede more average goals per match when the Brazilian is included in the starting lineup. He has been inconsistent all season and as a result, has been dropped from the starting XI multiple times. So far, Felipe has made 16 appearances in LaLiga and four in the Champions League. The 32-year-old was an unused substitute for his side in the Round-of-16 match against Manchester United.

Let’s take a look at some stats from the Champions League to gauge Felipe’s inconsistent performances for the Rojiblancos. 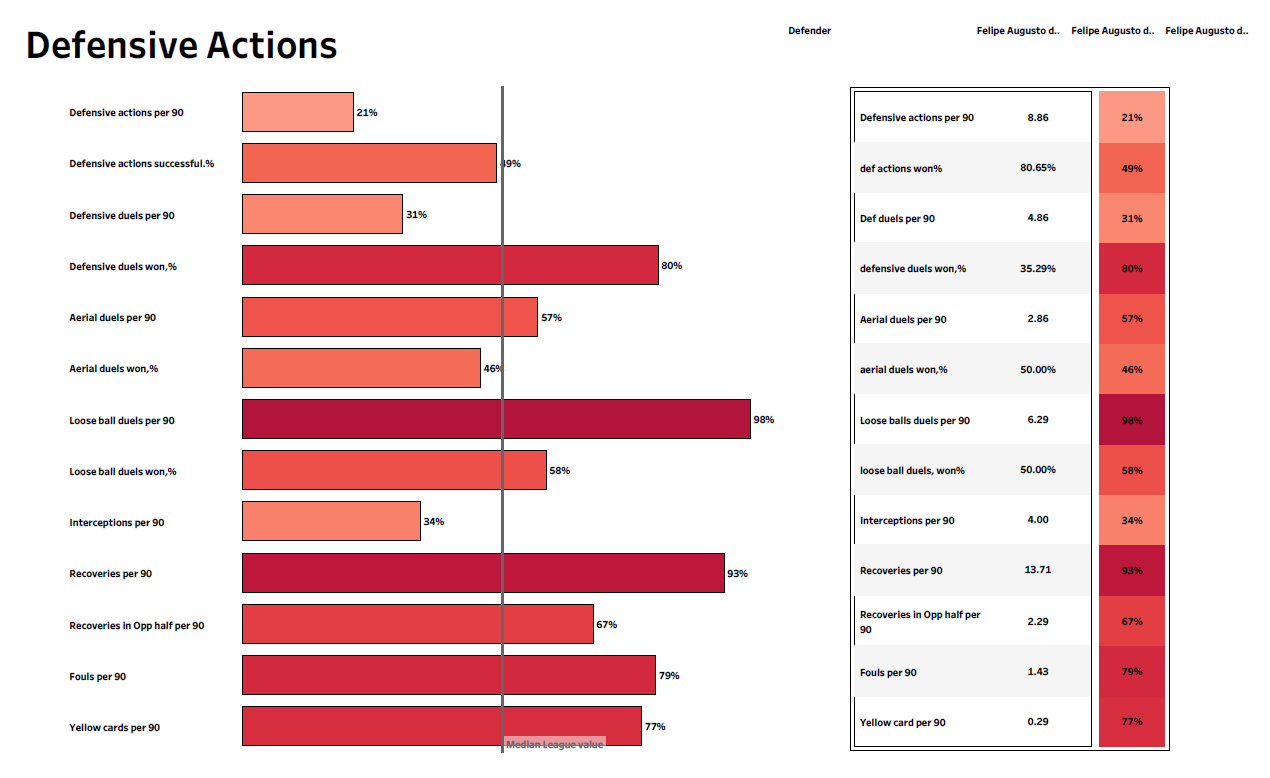 In the above viz., we can see Felipe’s defensive stats. While most of his stats surpass the league median, Felipe has fared far below the average in terms of many other stats. Some of those stats are defensive actions per 90, defensive duels per 90, aerial duels won, and interceptions per 90. In the previous seasons, Felipe was known for his aerial ability and ball recoveries. However, this season he has been underwhelming in terms of aerial duels and recoveries, as indicated by his stats as well. The Brazilian currently has the lowest percentage of duels won than any other Atletico defender. 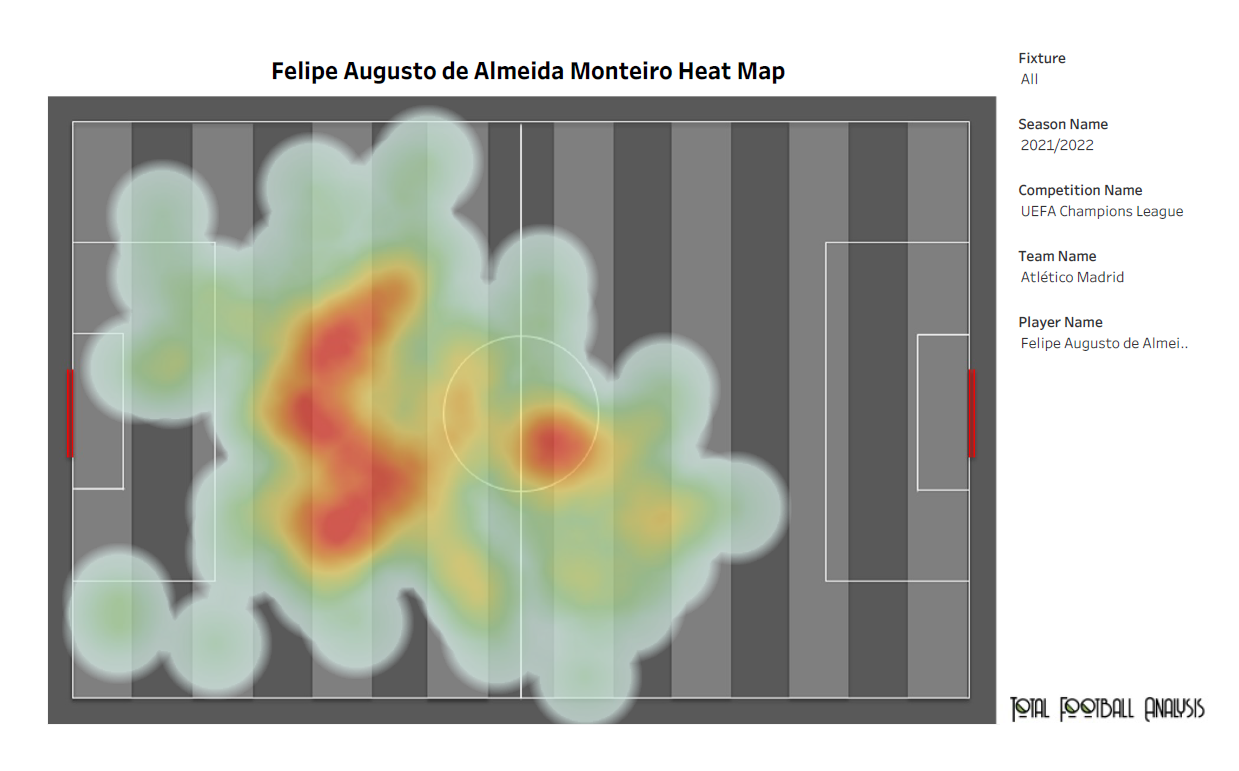 The above heat map highlights the areas of the pitch where Felipe is active. There have been many instances this season where Felipe has been poor with his positioning and has made risky passes. He has also made multiple errors in judgment and as a result, has been sent off. This season, Simeone has deployed both a back-three system and more recently, a 4-4-2 system. In both systems, Felipe has operated as a centre-back. Although his performances have been underwhelming, Felipe’s work rate has been decent, as shown in the above viz. 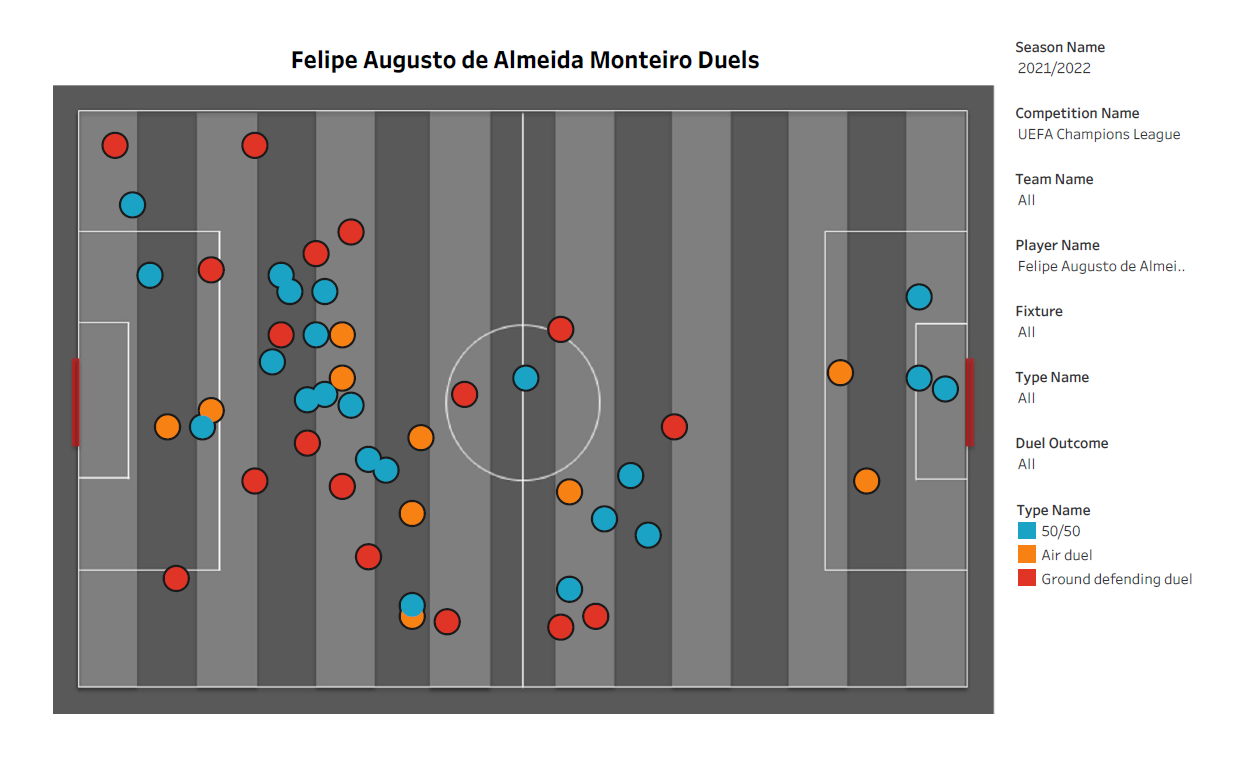 In the above viz., we can see the areas of the pitch where Felipe has engaged in defensive and aerial duels. In the previous seasons, Felipe was a definite threat from indirect set-pieces and was a target man for crosses. However, we can see in the above viz. that he has been involved in a relatively lower number of aerial duels. In the Champions League, the Brazilian has won an average of less than one aerial duel per match. In contrast, Gimenez has averaged two while Savic has averaged four, despite the latter making fewer appearances.

Felipe’s stats and recent performances indicate that he has been underwhelming this season. However, Atletico’s defensive frailties cannot be attributed to him alone. A strong backline is a result of the combined efforts of all the members, and the Colchoneros have often lacked that unity at the back this season.