Atletico Madrid have a host of midfielders who have underperformed in this campaign of LaLiga. At one stage, their meek title defence saw them in danger of missing out on next season’s UEFA Champions League, but they have since recovered and finished third behind Real Madrid and Barcelona. The Mexican, Hector Herrera, is leaving for MLS team Houston Dynamo. Thomas Lemar is entering his final year of the contract, and Koke, the club captain, will turn 31 next January. All of these show that Los Colchoneros need to strengthen their midfield this summer. One possible candidate is Leicester City midfielder Boubakary Soumare. Here, we will look into what the Frenchman may add to Atletico Madrid’s midfield. 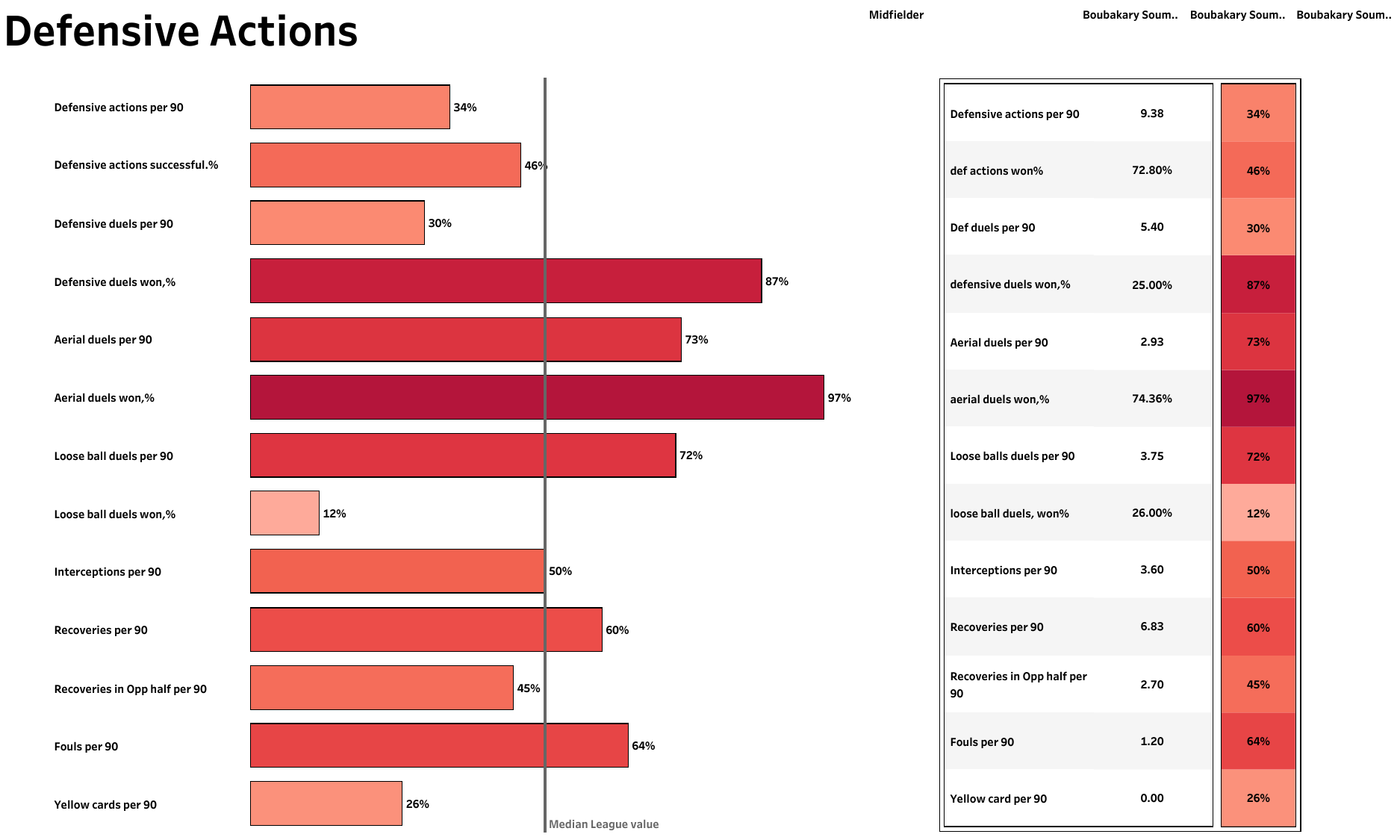 Soumare has managed to play only 1,100 minutes of Premier League football this season for Leicester City, which is less than a third of the available minutes. The Frenchman, who was bought from then French Champions Lille in the summer of 2021, made just 12 starts for the Foxes. In his limited playing time, he attempted 9.38 defensive actions per 90 at a success rate of 72.8%. He has also managed to win 25% of the defensive duels he contested in. Using his height of 188 cm to his advantage, Soumare won nearly three-quarters of his aerial duels.

Shown above is the heat map of Soumare for Leicester City this season in the Premier League. The Frenchman’s passing accuracy was 81.5%, and he completed 39 progressive passes and 31 passes into the final third. Defensively, Soumare made 250 pressures, 41 tackles and interceptions, 19 clearances and 13 blocks. 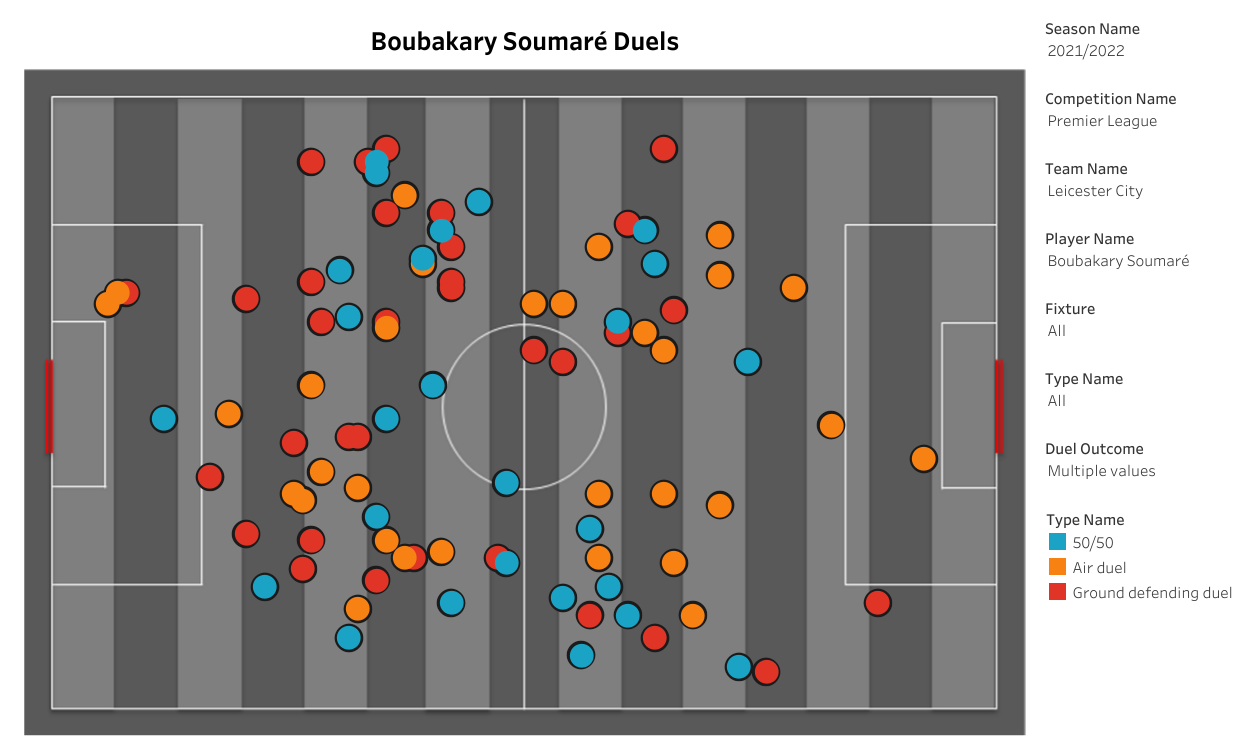 Seen above are the winning duels locations of Soumare for Leicester City in the 2021-22 Premier League season. The Frenchman has contested a mixture of 50/50s, aerial duels and ground-based duels. Unsurprisingly, most of his successful duels have come in the middle of the park. 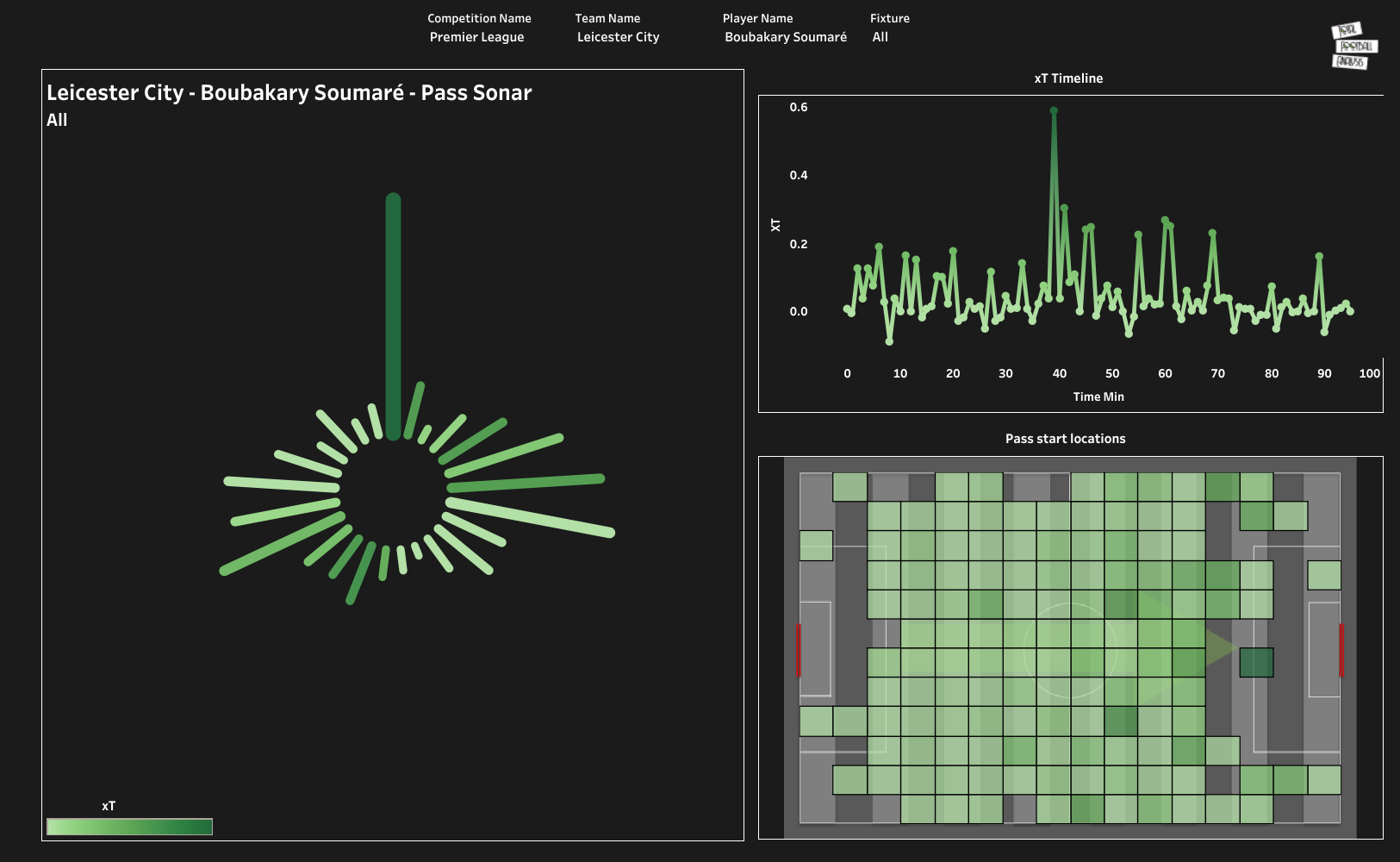 Given in the above visual are the pass sonar, xT map and xT timeline of Soumare for the Foxes in the Premier League this campaign. As a defensive midfielder, threat creation is not his primary role. So, his xT has rarely exceeded 0.2. The Frenchman opts to play the ball safe by passing to the nearest teammates. Most of the small xT that he has produced has come from the forward passes.

Boubakary Soumare was instrumental to Lille’s Ligue 1 triumph, against all odds, in the 2020-21 season. However, he has struggled to replicate this at the King Power Stadium as Leicester finished the season eighth, meaning they will miss out on European football next season. Soumare might be appreciated by the Atletico Madrid boss, Diego Simeone, for his defensive abilities and work rate.