For the first time in recent months, it’s looking like Atletico have finally gathered momentum. Simeone’s tweaks in the formation seem to have provided the Rojiblancos with the blueprint to finishing in the top four in LaLiga. The changes in the midfield and the wide areas have not only made Atletico solid in the defense but also purposeful in the attack. As a result, the Colchoneros are undefeated in their previous four matches in all competition, scoring nine goals and conceding just two.

Atletico’s recent win against Real Betis has moved them to fourth place in LaLiga. It was a classic Atletico performance where they came out on top despite having lower possession than their opponents. For the third consecutive match, Simeone started Angel Correa and Joao Felix in his two-man attack. Just two minutes into the game, Correa found Felix in front of the goal for an easy finish. Betis then leveled the score through Cristian Tello who scored via a controlled strike from distance. Atletico gained back the advantage in the second half, when Marcos Llorente’s squared pass found Felix for a simple finish. Thomas Lemar then sealed the win in the 80th minute, arriving late in the box and finishing with his left foot.

While Angel Correa has been Atletico’s main goal-threat since the start of the year, scoring seven in 10 matches, Joao Felix has been impressive in Atletico’s recent matches across all competitions. Felix has scored four goals and laid two assists in the last six matches. Atletico’s attack has been repurposed without much involvement of high-profile names such as Luis Suarez and Antoine Griezmann. 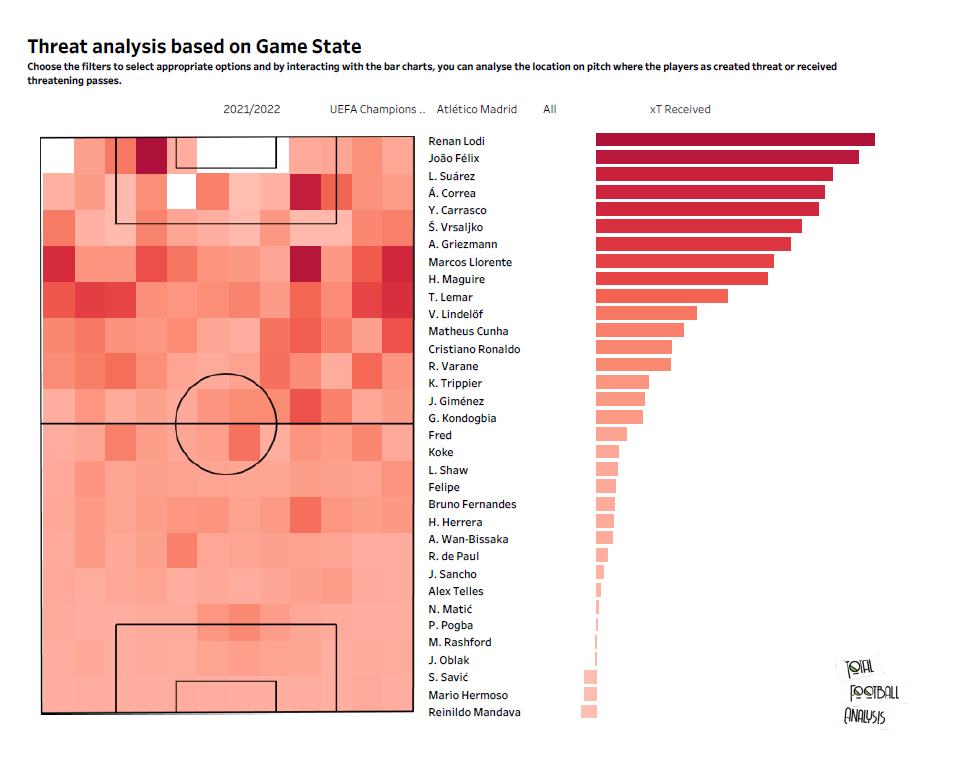 In the above viz., we can see the location on the pitch where Atletico have created high expected threat or received threatening passes. The Colchoneros have been threatening in the half-spaces in the opponent’s half while also creating threat inside the opponent’s box. Both Correa and Felix are among the top-five Atletico players to have created high threats from passes received, which indicates that they are getting into threatening areas of the pitch frequently. 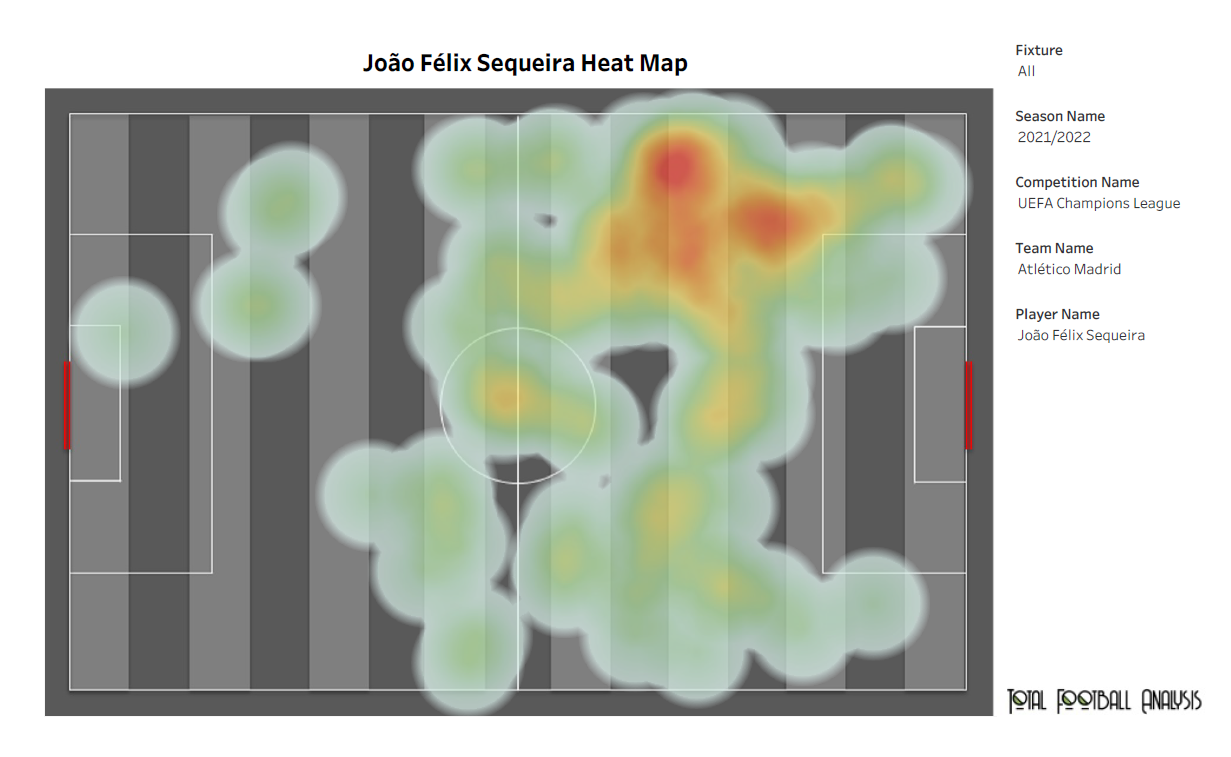 Felix has been in inspiring form in recent weeks. His intelligent runs and constant movement have been influential for his side. Felix is consistently dropping back in open spaces to receive passes and start Atletico’s attacks. The above viz. highlights Felix’s activity zones on the pitch. We can see that he is active on the left wing in the opponent’s half. In recent matches, the Portuguese forward has been a major problem for the opponent defenders. In addition to being an overall goal threat, he has demonstrated his link-up play by bringing his teammates into the game. 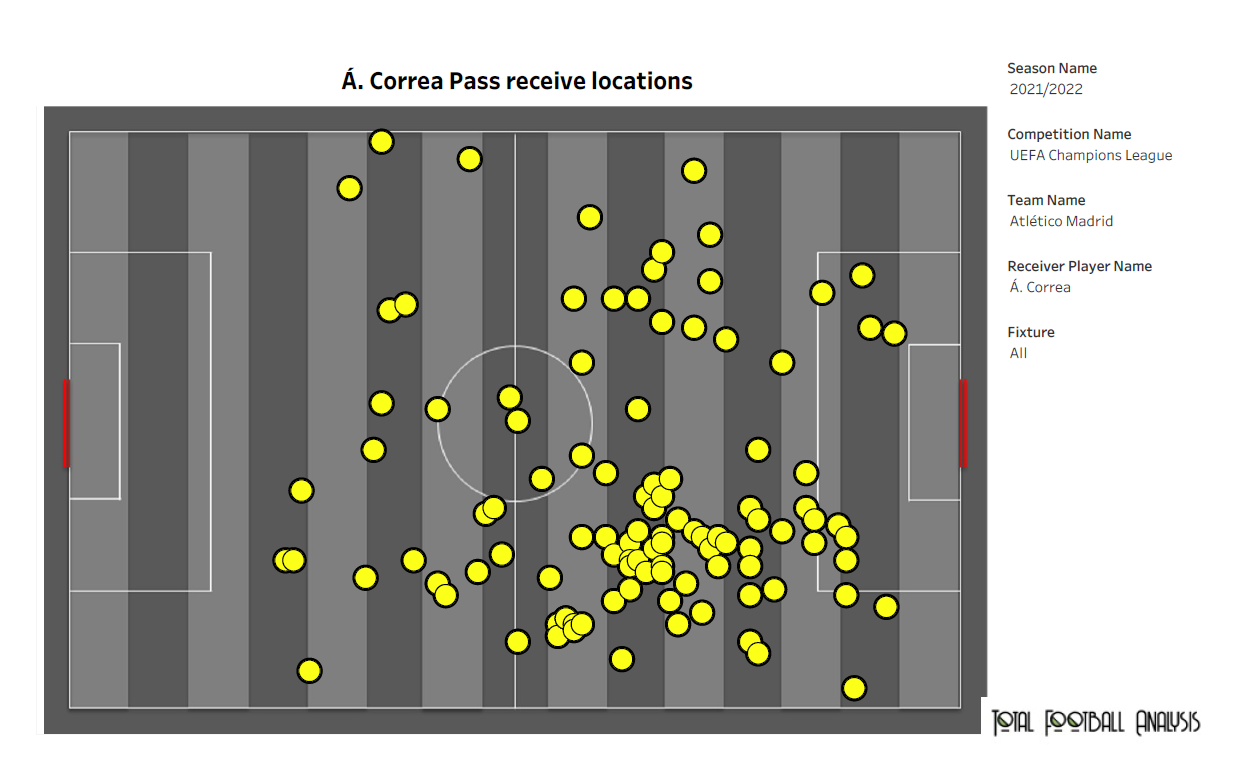 The 26-year-old is a versatile forward, capable of playing on the right wing as well as a second striker. He has been one of Atletico’s standout performers amidst a season of inconsistency, scoring 11 goals and laying five assists in LaLiga. Correa has been even more productive since the turn of the year, and his performances have helped Atletico take crucial points. In the above viz., we can see the areas of the pitch where Correa has dropped to receive his passes. Combined with his impressive first touch and close control of the ball, Correa is positionally intelligent and can exploit spaces with his runs. The Argentine was criticized for his lack of finishing ability in the previous seasons; however, he has displayed vast improvements and has been able to regularly find the back of the net this season.

Both Felix and Correa have been in remarkable form in the recent matches and could prove to be instrumental in the upcoming matches. The Colchoneros will look to move to the next round of the Champions League and cement themselves amongst the top four in the LaLiga.