Following a 1-1 draw at the Wanda Metropolitano Stadium against Manchester United, Atletico’s 1-0 win in the return leg at Old Trafford saw them progress to the quarter-finals of the Champions League. Renan Lodi’s header before the break ensured a 2-1 aggregate win for the Rojiblancos. United struggled to break down a robust Atletico defense despite dominating possession for a large duration of the second half.

Diego Simeone’s tweaks in the formation have improved Atletico’s performances massively since the first leg of the Round-of-16. They are currently unbeaten in seven successive matches in all competitions and have moved to fourth place in LaLiga, significantly improving their bid for a top-four finish. The Colchoneros’ win at Old Trafford was a consequence of a classic Atletico performance, where they held on despite creating fewer chances.

While the first leg saw Atletico dominate the game in the midfield and the attacking half, the match at Old Trafford was won by their defensive tenacity. However, considering overall performances in both the legs, the Rojiblancos deserved to move to the next round. Although the win should be credited to a combined effort of Simeone’s men, there were some solid individual displays from multiple players.

Renan Lodi, who has shined in his new role of an attacking wing-back, was crucial again for his side; he was solid in defense and dynamic in attack. Among other players, who struggled for the better part of the season but came through for Atletico when it mattered the most, were goalkeeper Jan Oblak and captain Koke. Both Oblak and Koke were instrumental in the win, despite the criticism they have received this season.

Let’s take a look at some stats to gauge how the Colchoneros conquered Old Trafford. 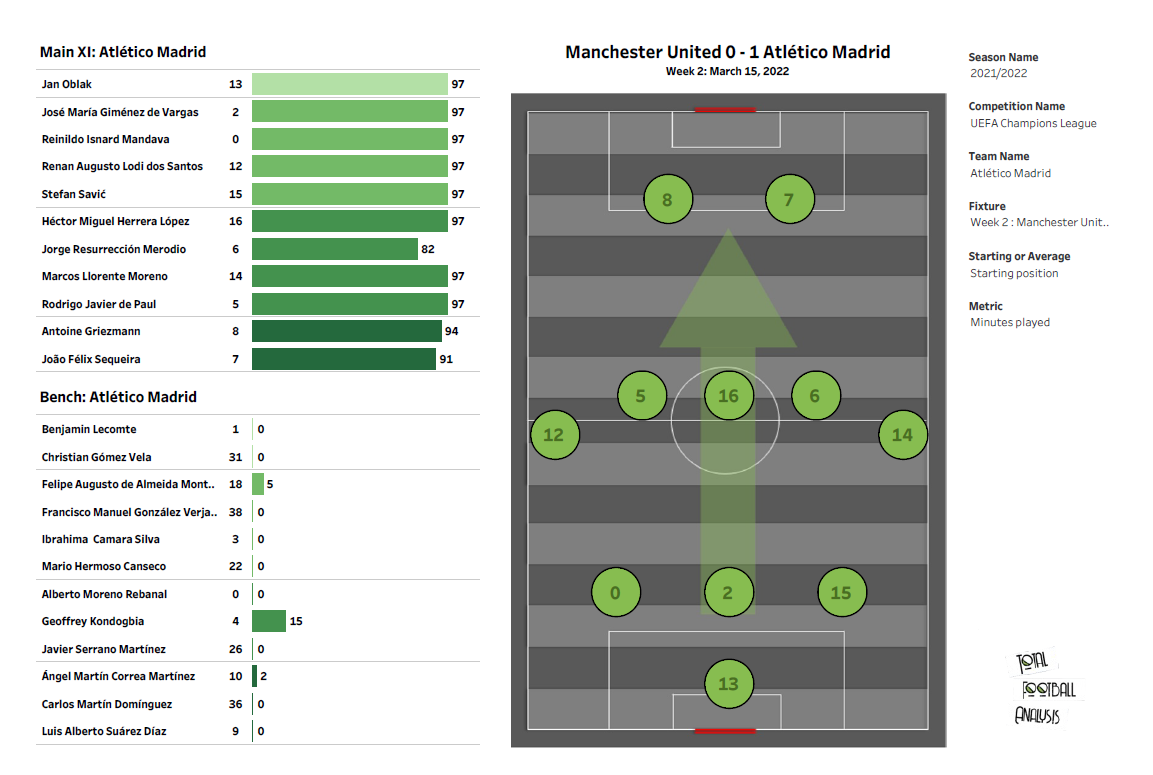 The above viz. displays Atletico’s starting lineup for the return leg of the Round-of-16. Simeone deployed a similar 3-5-2 formation that saw Atletico dominate the first leg, however, with some changes. Antoine Griezman started alongside Joao Felix in the attack. The three-man midfield included Koke, Hector Herrera, and Rodrigo de Paul. Marcos Llorente and Renan Lodi were deployed as wing-backs/wide-midfielders. Reinildo, Jose Gimenez, and Stefan Savic were the three centre-backs. Goalkeeper Jan Oblak was instrumental for Atletico, making crucial saves under pressure and easing the load on the defenders. 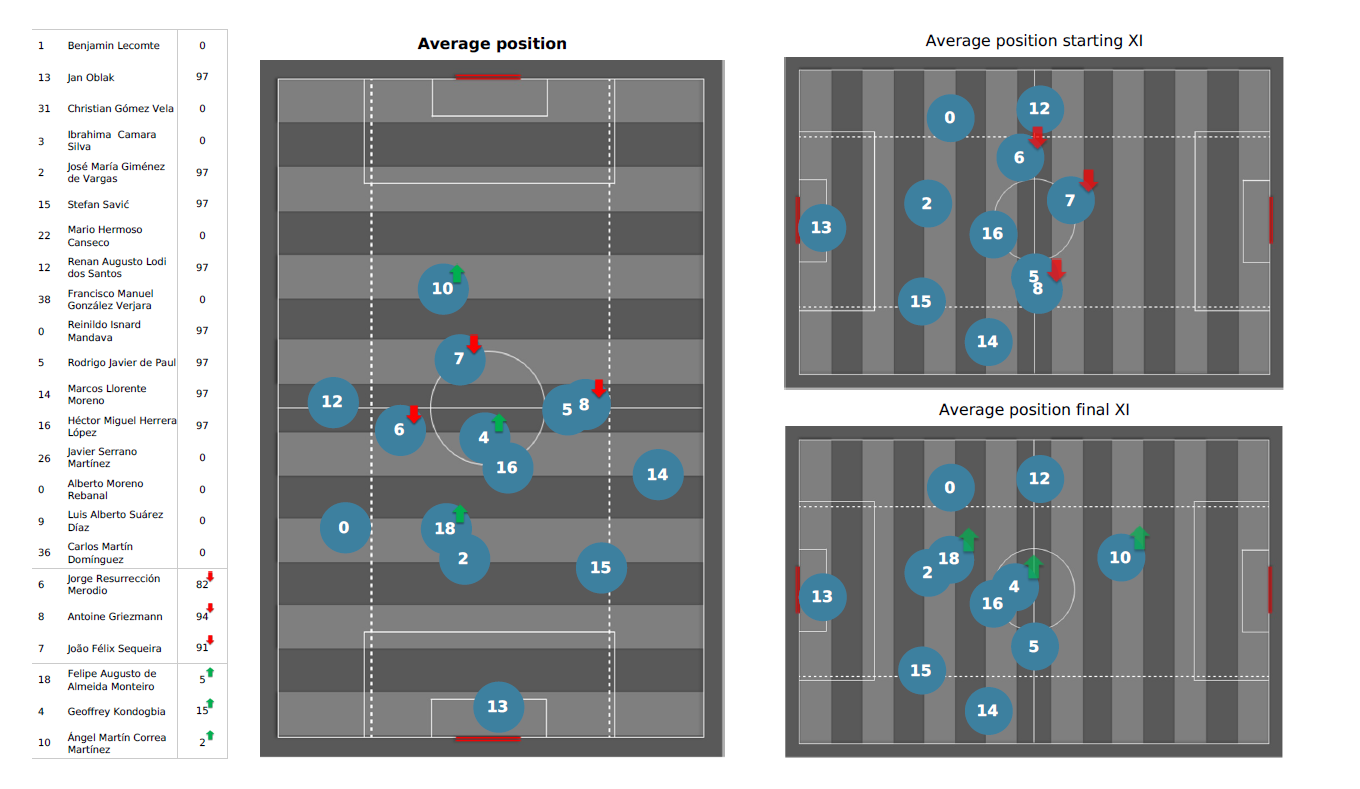 In the above viz, we can see the average position occupied by the Atletico players. The Colchoneros were pushed back in their half, absorbing the pressure from United’s attacks. Both the wing-backs remained near their half as well. We can also see that Atletico crowded the midfield with Koke, Herrera, de Paul, and Griezmann occupying spaces near the centre. Griezmann, in particular, was impressive with his movement, playing his role in the build-up to the goal while working relentlessly to drop deep to create overloads near the centre. His work rate was impressive as well, as he combined well with his midfielders. 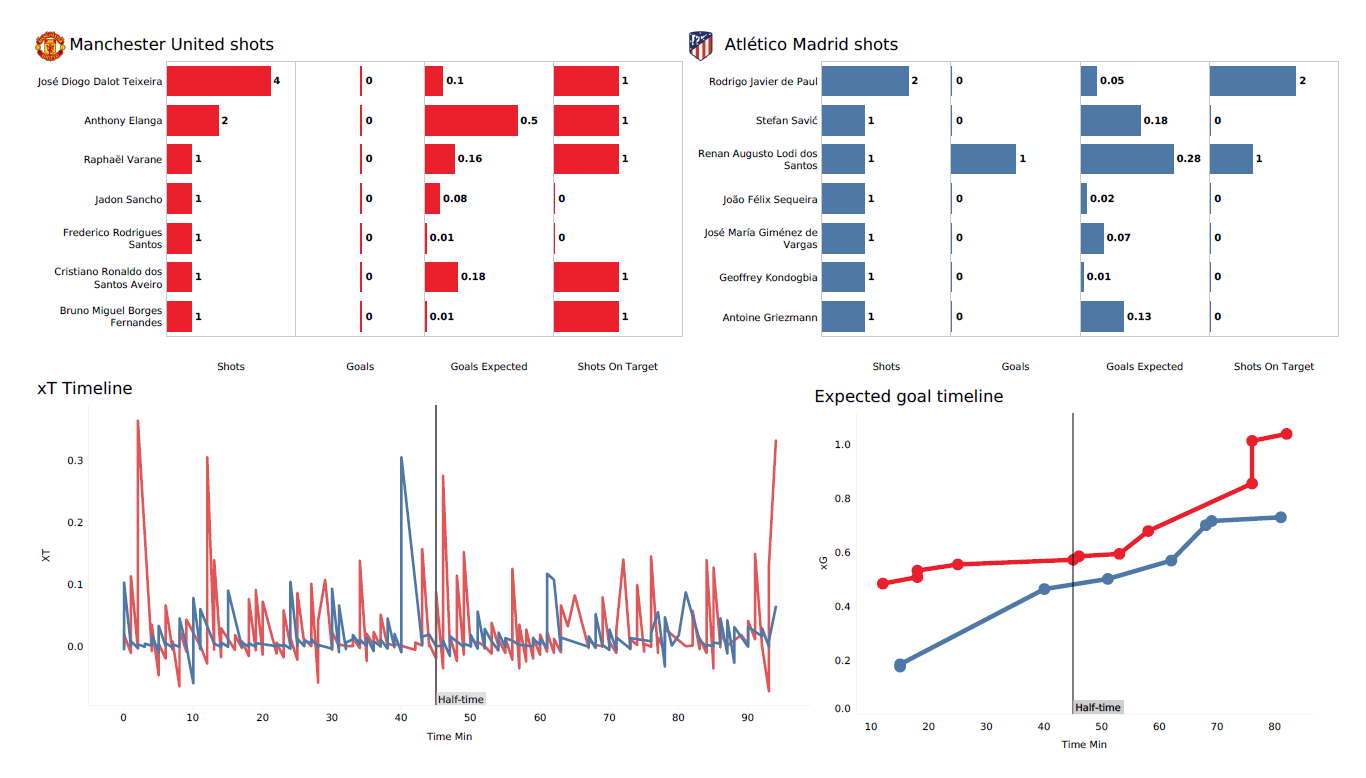 Here we can see that United were the more threatening side during a major duration in both halves. Atletico absorbed the pressure from United and exploited their opportunities during counterattacks. They took eight shots, with three of them on target. Renan Lodi had the highest xG for Atletico. His header before the break proved to be the difference for his side. Joao Felix also played an important role during the buildup to the goal, and he looked threatening during a few chances from open play that Atletico created. Koke was relentless in his pressing and worked tirelessly without the ball.

Simeone’s men defended as a unit and absorbed the pressure from United’s attacks effectively. They were threatening from a few chances that they did create and were able to score a goal from fluid movements and passing from the right flank before the first half. The Colchoneros will now take on the blue-half of Manchester when they face Manchester City in the quarter-finals.