Atletico Madrid will head to Old Trafford next week for the return leg of the Champions League Round-of-16. Diego Simeone’s men would be looking to secure a place in the quarter-finals, after an improvement in overall displays in the recent weeks. Undefeated in four matches in all competition, Atletico will be aiming to continue their winning run against Cadiz in LaLiga, before taking on the Red Devils.

Simeone stated in a recent interview that his side’s “team spirit has improved” and that they would need to continue to improve. The Colchoneros’ recent turnaround in form started in the first leg of the Round-of-16 at home against Manchester United. Changes in the lineup, coupled with tactical tweaks, provided Atletico with the blueprint to dominate the match. Their display against United was far superior to most of their displays this season. The Rojiblancos attacked intensely and defended as a unit. A dominating performance in the midfield laid the foundation for Atletico. However, they still had to settle for a draw.

Despite the draw, the lineup in the first leg provided Atletico with the roadmap to rescue their season in LaLiga, while also seeking a passage into the quarter-finals of the Champions League. The Colchoneros would be hoping that their star performer in the first leg, Geoffrey Kondogbia, would be fit in time for the trip to Manchester. Atletico have also suffered injury blows to Thomas Lemar and Angel Correa in the recent week. While Correa might be available for the return leg, Lemar will be sidelined for a considerable time. Koke and Savic have also made their return to the squad in recent days.

Let’s take a look at some stats to gauge the lineup that could fire Atletico into the quarter-finals.

In the first leg against Manchester United, Atletico lined up in a 5-3-2 formation. Angel Correa and Joao Felix led the two-man attack. Geoffrey Kondogbia, Hector Herrera, and Marcos Llorente formed the three-man midfield, while the back-line consisted of Renan Lodi, Reinildo, Jose Giminez, Stefan Savic, and Sime Vrsaljko. In the three matches since the draw against United, Simeone has chosen an almost similar lineup, with a few changes. 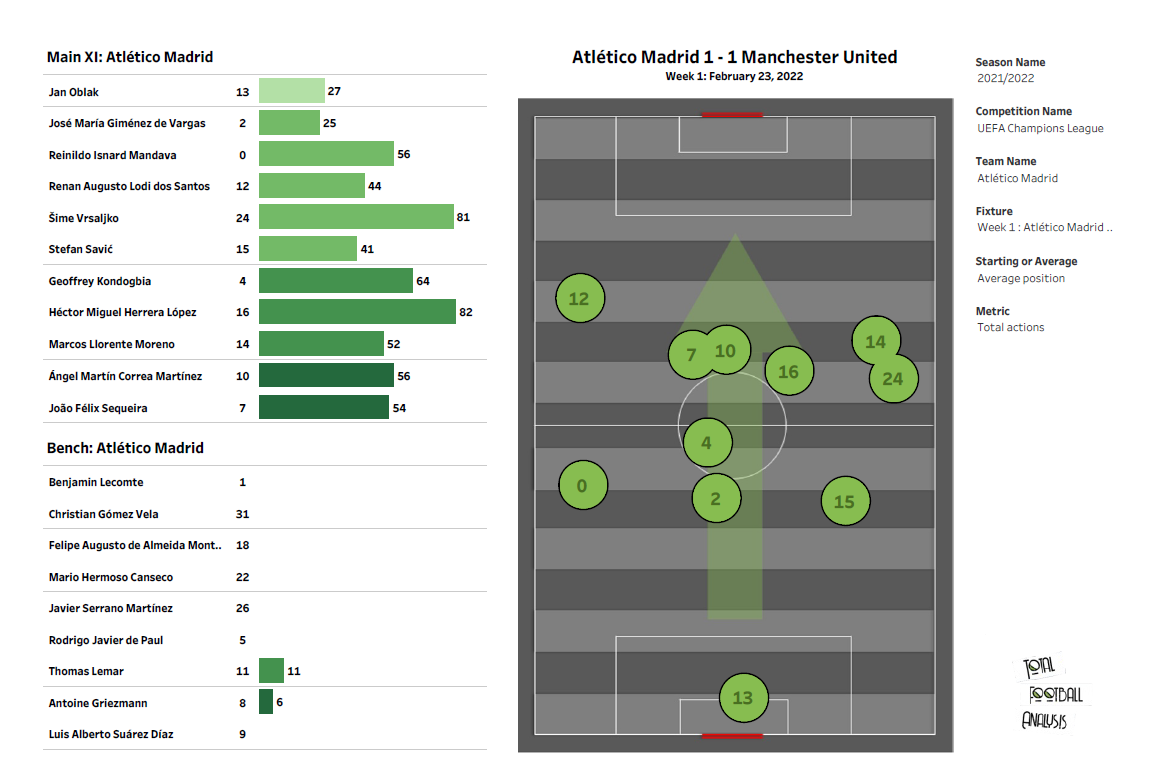 In the above viz., we can see the average positions of Atletico’s players. Atletico had multiple players push high up the pitch. Both Lodi and Llorente were given the license to attack the wide areas. Lodi was able to stretch out the United defense, allowing Felix to play more centrally. Both Correa and Felix occupied central spaces. Kondogbia occupied the space near the centre, while Herrera pushed up high. Correa and Felix combined well with Kondogbia and Herrera to cut off any passing lanes for the Red Devils through the middle. This combination allowed the play to move towards the wings, where Lodi and Llorente were relentless in their pressing.

The above viz. presents a comparison of the lineup of Atletico and Manchester United. We can see that United were crowded in the middle. They were unable to bypass the Atletico midfield for the majority of the match. The Colchoneros had more players in the opponent’s half than United.

Baring any other injuries, Simeone could very well go with the same lineup as in the first leg. Joao Felix has been in sensational form in recent weeks, and he should start in the attack along with Correa or Griezmann. Lodi and Llorente have been impressive as wing-backs, which makes it a certainty that they will feature in the return leg. Depending upon his availability, Kondogbia could start in the midfield, along with Herrera.