Diego Simeone’s struggles to find the right combination and system have been prominent this season. During the start of the season, the Argentine manager deployed a back-three 3-4-1-2 or a 3-4-2-1 formation before he turned towards his previously favored 4-4-2 formation. Simeone has tried and tested multiple systems and their variations with little effect. However, in Atletico’s Champions League Round-of-16 match against Manchester United, the Argentine seemed to have found a system that works.

With few adjustments and changes, Atletico looked impressive against the Red Devils. In place of more technical players such as Lemar and De Paul, Simeone went for quick and industrious ones. Kondogbia and Herrera operated in the midfield while Lodi and Llorente were deployed as left and right midfielders, respectively. This combination of midfielders allowed Atletico to dominate the game in the midfield, as Kondogbia and Herrera were successful in blocking passing lanes through the middle. When the game moved towards the wings, Lodi and Llorente were impressive in pressing.

The hybrid midfield/full-back role seems to have worked wonders for the Colchoneros. Both Lodi and Llorente were impressive in their defensive and attacking duties in the match against United. Simeone deployed the exact system with Lodi and Llorente as wide midfielders/wing-backs in the match against Celta Vigo, and Atletico came out on top. While it’s too early to comment if the system will work against other teams as well, for now, Simeone has displayed his tactical pragmatism.

Let’s take a look at some stats to gauge the roles of Lodi and Llorente in Simeone’s new system. 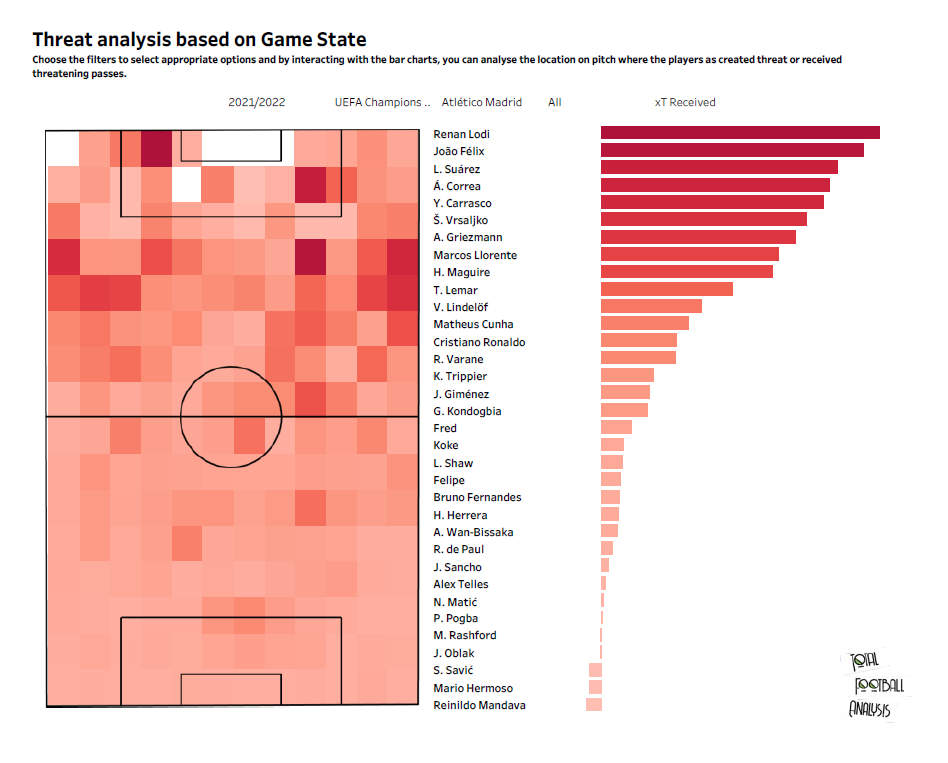 In the above viz., we can see the various locations on the pitch where Atletico have created threats or received threatening passes. The Rojiblancos have created a high threat in the wide areas and the half-spaces near the opposition box. We can see that both Renan Lodi and Marcos Llorente have created a high threat through passes received. Deploying Lodi and Llorente on the wings allowed Atletico to stretch out the opponents. Both the wing-backs attacked and pressed intensively while also contributing defensively. 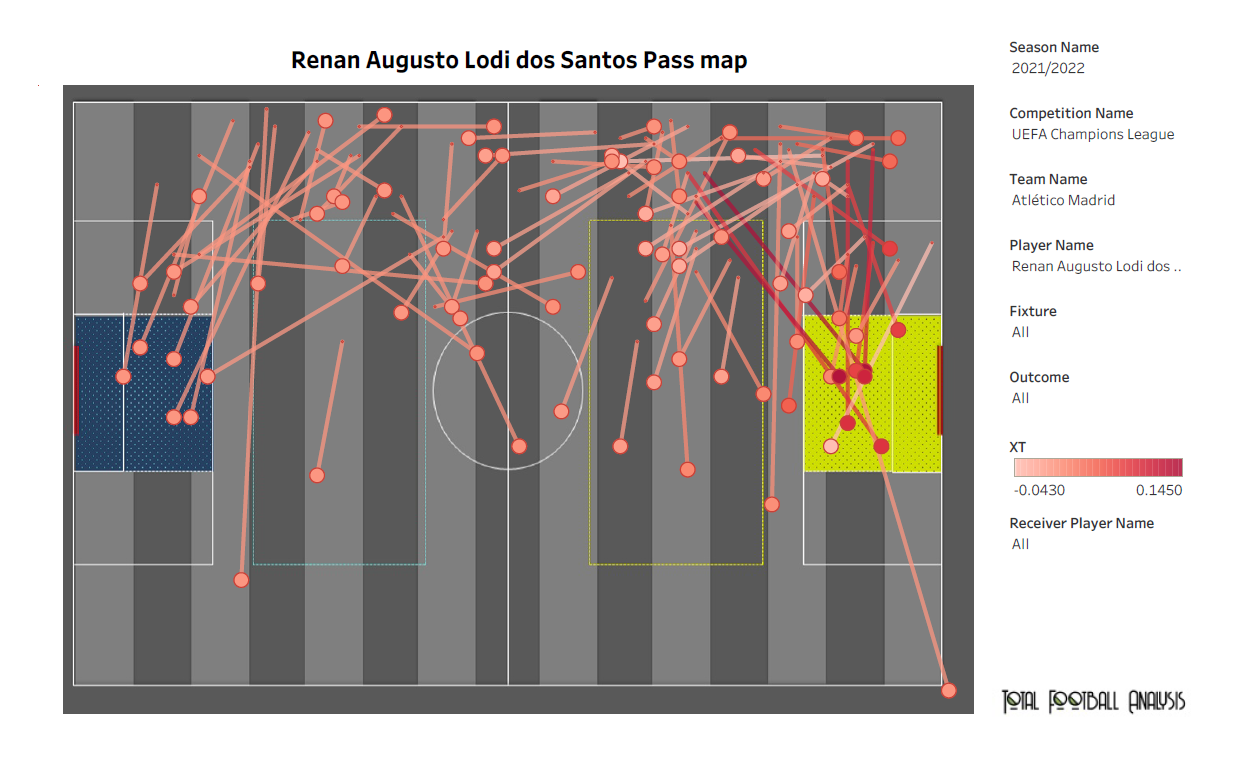 In the above viz., we can see the areas of the pitch where Lodi has delivered his passes. His multiple threatening passes into the opposition box from the wide areas indicate his attacking capabilities. In the two games that the Brazilian has been deployed as a wing-back, he has created three goals. Deploying Lodi as a wing-back has repurposed his attacking contributions. The tweak in the system in the match against United not only allowed Lodi to flourish but also allowed Felix to operate in a more central position. As a result, Felix was a constant threat to United’s defenders. 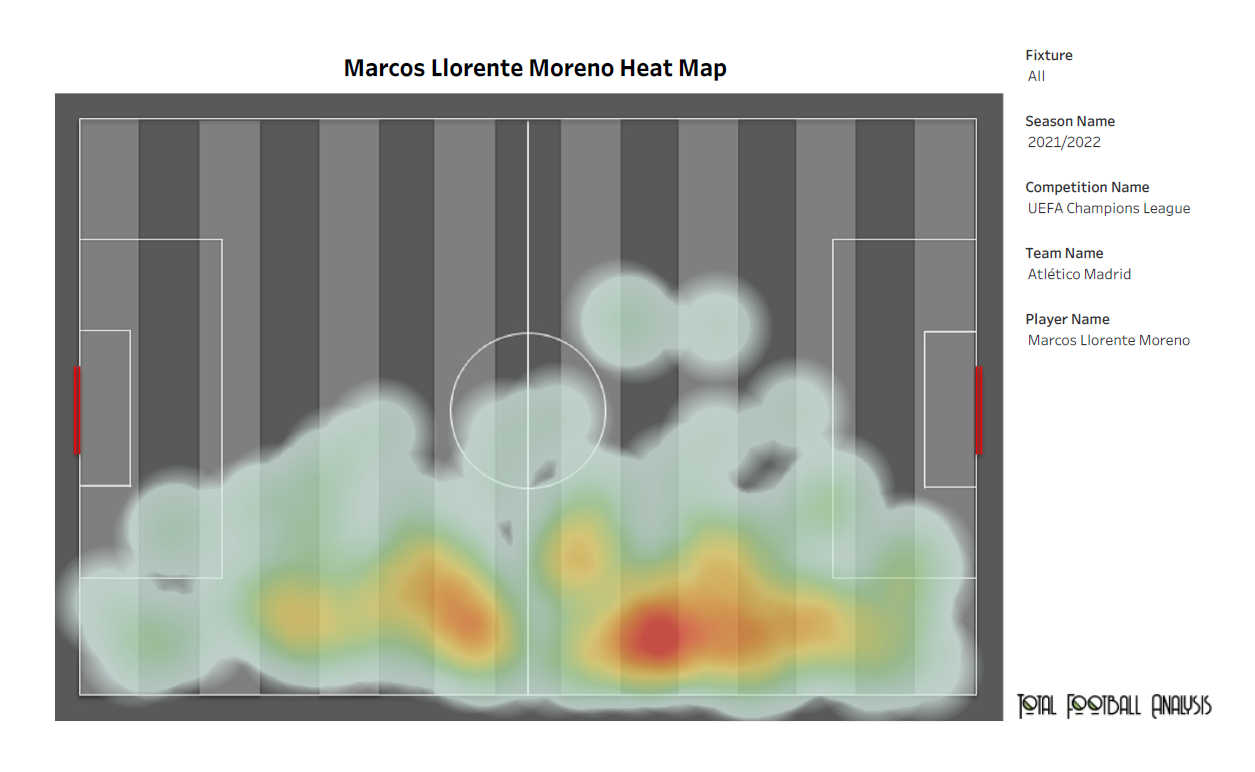 Marcos Llorente was another player whose role has been changed in recent games. Just as Lodi, Llorente is also versatile and experienced in the backline. Llorente is adept at exploiting spaces and consistently makes threatening runs behind the defenders. The 27-year-old is direct in his style of play and tries to get the ball to the goal. He is known for his physicality to attack and defend with intensity. In the above viz., we can see the areas of the pitch where Llorente has been most active. His forward runs on the wing are highlighted in the above viz.

The new system might be the combination that Simeone had been looking for the entire season. Tweaking Lodi and Llorente’s role seems to have revitalized the Rojiblancos.