Angel Correa joined Atletico Madrid from San Lorenzo in 2014, since then he has made 305 appearances for the Colchoneros, scoring 53 goals and adding a further 49 assists. The Argentinian forward has been described as a versatile forward, capable of operating in multiple roles in the attack. While he has been at Atletico for over six seasons now and has made plenty of appearances, Correa has not managed to get into his stride and has been inconsistent at times. In Rojiblancos’ title-winning 2020-21 season, Correa spent most of the season as a substitute to Luis Suarez, however, he was given his opportunity in the back end of the season in the absence of the Uruguayan striker and produced impressive performances, helping his side to secure the title.

Amidst Atletico’s slow start to the season, which has seen them slip to the fourth position in La Liga with nine wins, five draws, and five losses in 19 league matches, Correa has found consistency. The 26-year-old has scored six goals and added a further four assists in 19 appearances in the league. The Argentinian was in impressive form in the recent game against Rayo Vallecano as he netted a brace, helping his side secure a 2-0 victory. He scored the first goal in the 28th minute, picking the rebound from Hermoso’s blocked effort and slotted the ball past the keeper. Correa then doubled the lead in the 53rd minute as he moved into the box and tapped home a cross from Lodi. The win was much needed for Atletico as they had lost their four back-to-back previous matches in the league.

In the Champions League as well, Correa was instrumental, as Atletico advanced to the Round of 16 after a closely fought 3-1 win against Porto. He scored a crucial goal in the 90th minute to double the lead for his side. 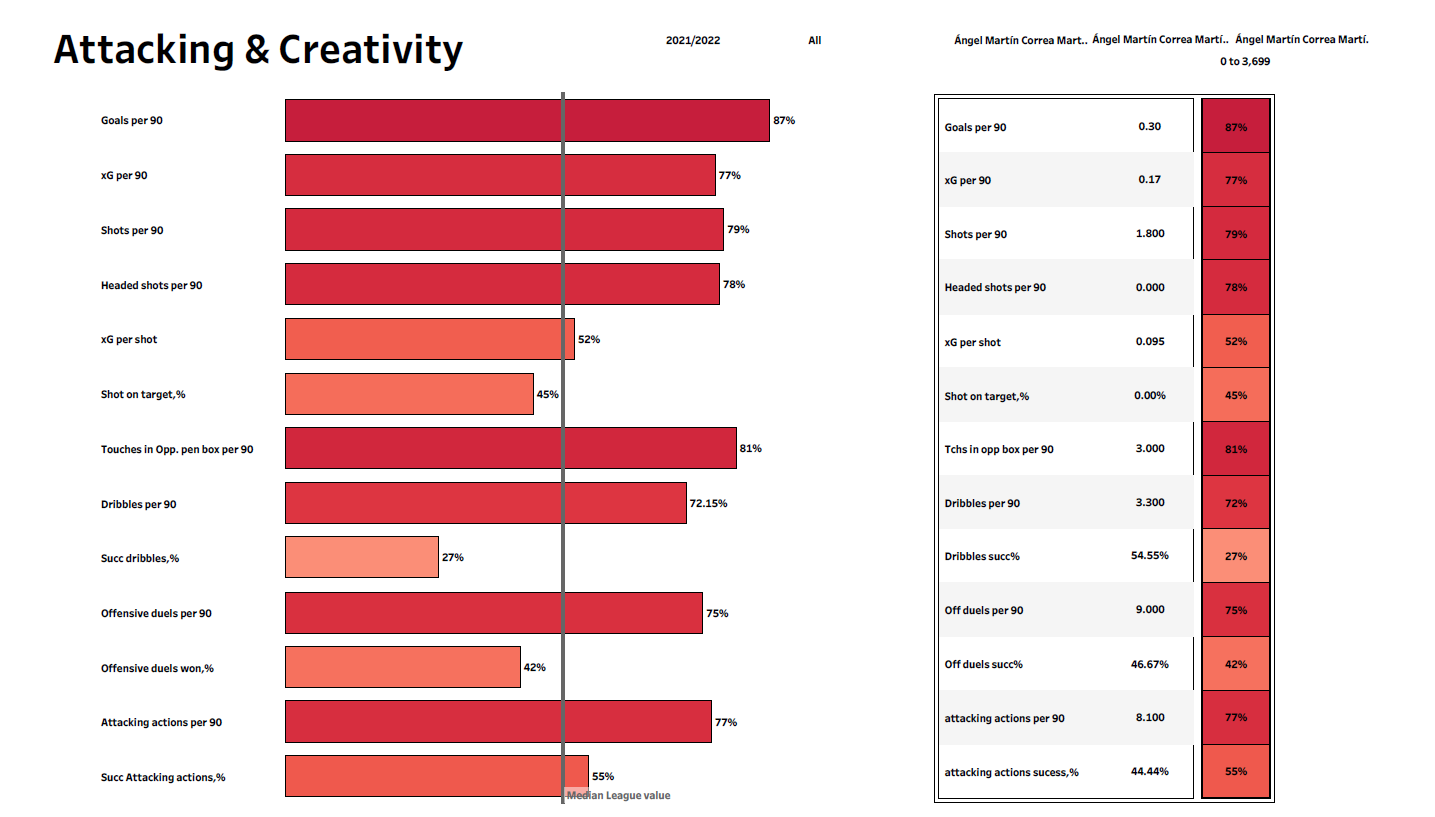 While the majority of his appearances in the Champions League group stage have come as a substitute, Correa’s attacking stats have nonetheless been impressive. Most of his stats surpass the league median value, with the most notable stats being average touches in the opponent’s penalty box, average shots, and average attacking actions per match. The Argentine’s stature and low centre of gravity make him a difficult player to defend against, while he also possesses brilliant technique and impressive first touch. 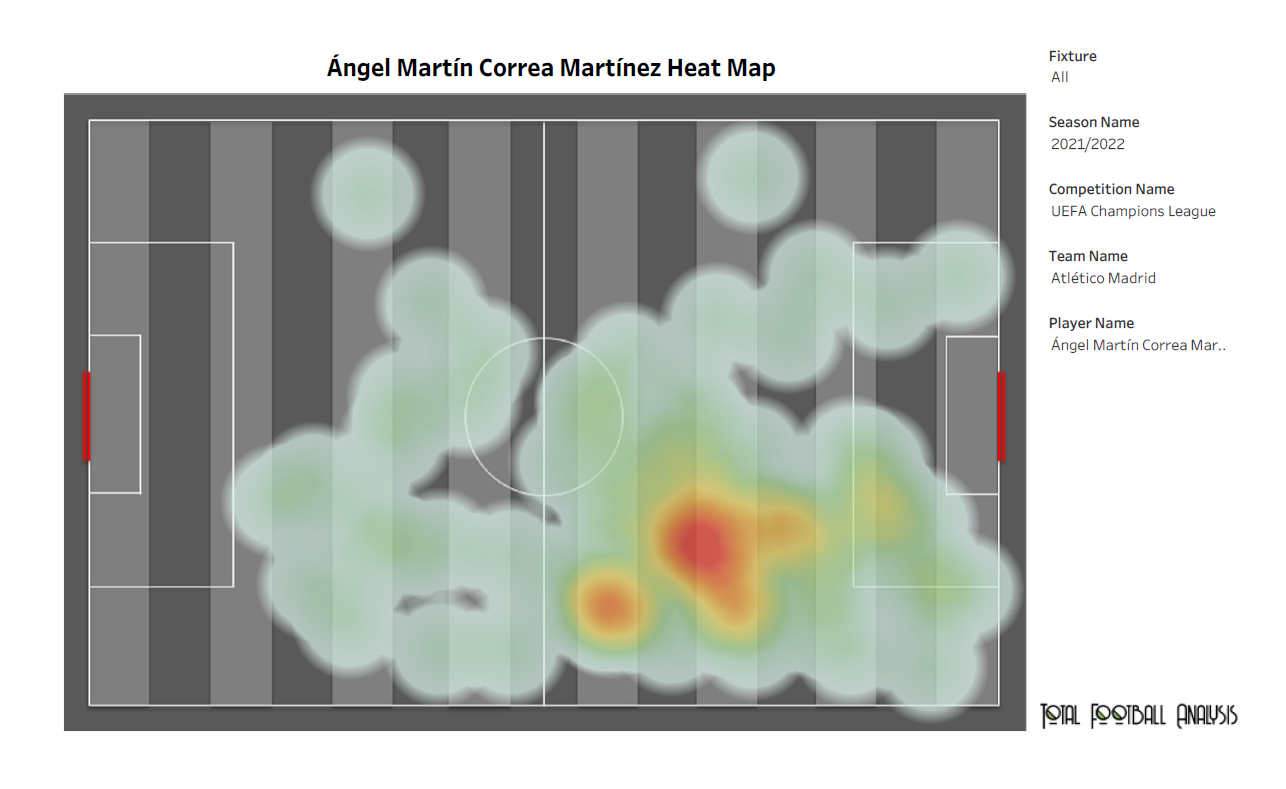 Mirroring the previous seasons, Correa has been deployed as a second striker in the current season as well in Simeone’s 4-4-2 or 3-4-2-1 formation. Along with his brilliant first touch and close control, Correa is intelligent in his movement and is adept at exploiting spaces in the opposition’s half, often dragging the defenders out of position. His impressive pace allows him to cover the ground quickly. Correa’s heat map displays the location on the pitch where he is most active in. The red zones indicate that he has been mostly engaged in the half-spaces in the right wing. 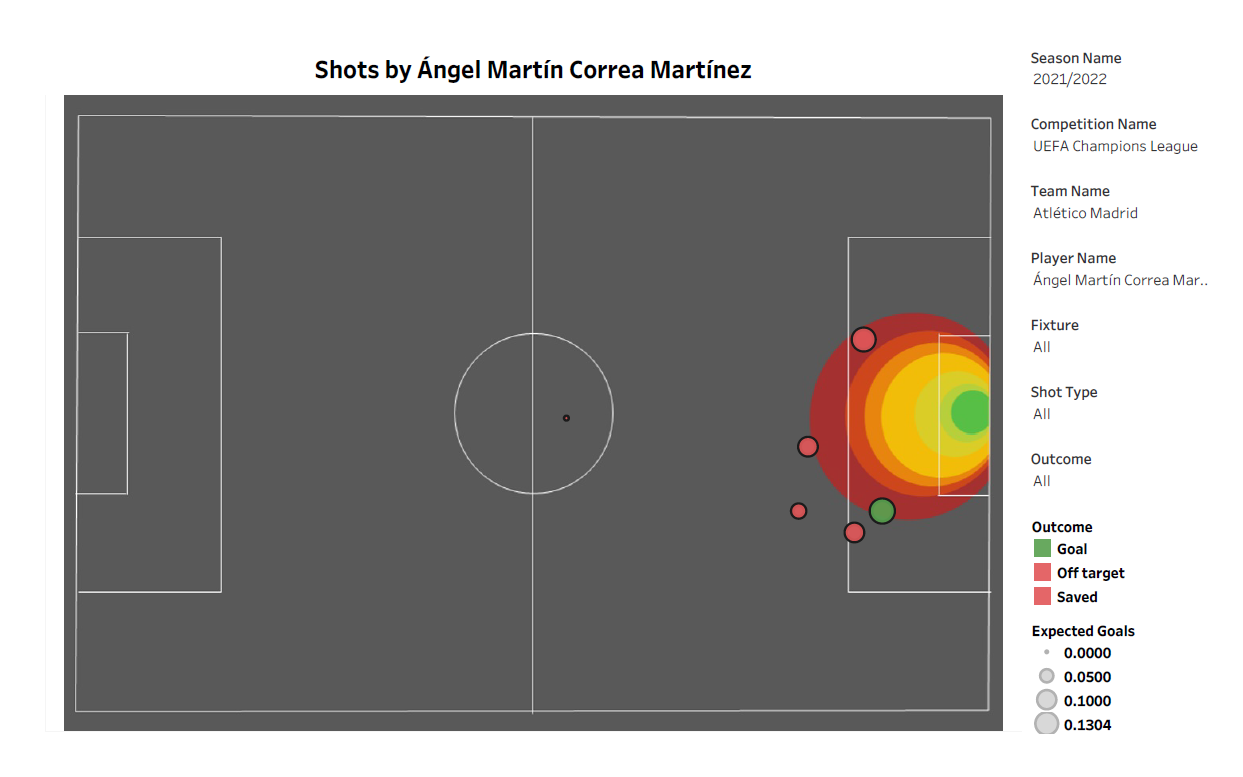 One area of improvement for the Argentinian forward is his finishing ability. Although he is capable of a range of strikes, Correa has been guilty of missing big chances in the recent seasons. His shot map displays the location from where his shots were taken. Most of his shots have been taken from inside the opposition’s box. 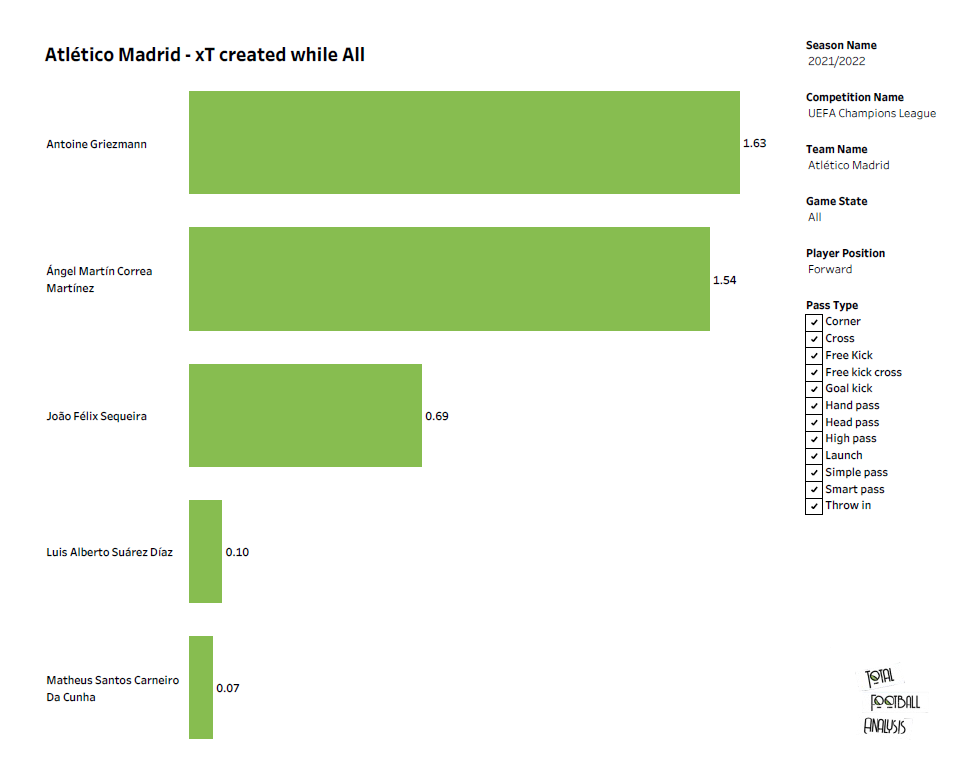 Correa’s creative side of the game is highlighted from the chart above. He stands second in terms of the expected threat created among Atletico’s forward players, just behind Antoine Griezmann.

Correa’s recent form has been rewarded by the Atletico hierarchy as he has recently been given a contract extension. He has produced impressive displays for the Rojiblancos this season and can aid Diego Simeone in the knockouts of the Champions League.