In the recent few days, Andreas Christensen has emerged as a transfer target for a host of clubs. Borussia Dortmund, Bayern Munich, and AC Milan are reportedly interested in a possible deal for the Danish centre-back. Christensen’s current deal expires in June and any talks of a new deal have not progressed so far. Among the clubs interested in signing the 25-year-old, Atletico Madrid are also reportedly in the running.

Many reports claim that Diego Simeone wants to reinforce his defense and has identified Christensen as a suitable target. While Atletico’s expected goal against is still the best in the La Liga, they have still conceded joint-highest goals among the top six sides. Despite not giving too many chances to the opposition, the Rojiblancos have conceded many goals. Many pundits have highlighted that Atletico fail to defend during quick transitions. Too often this season, they lost the ball in midfield, and their defenders have been caught up the field, struggling to track back. In addition, few of their regular centre-backs have been unable to cope up with the demands of a back-three system. Felipe is one example whose performances have declined.

Simeone would be looking to address his side’s defensive issues and bringing in Christensen, who excels in a back-three system, could provide the Argentine manager with the depth he requires.

Let’s take a look at some stats to understand if Christensen is suited to Simeone’s defense. 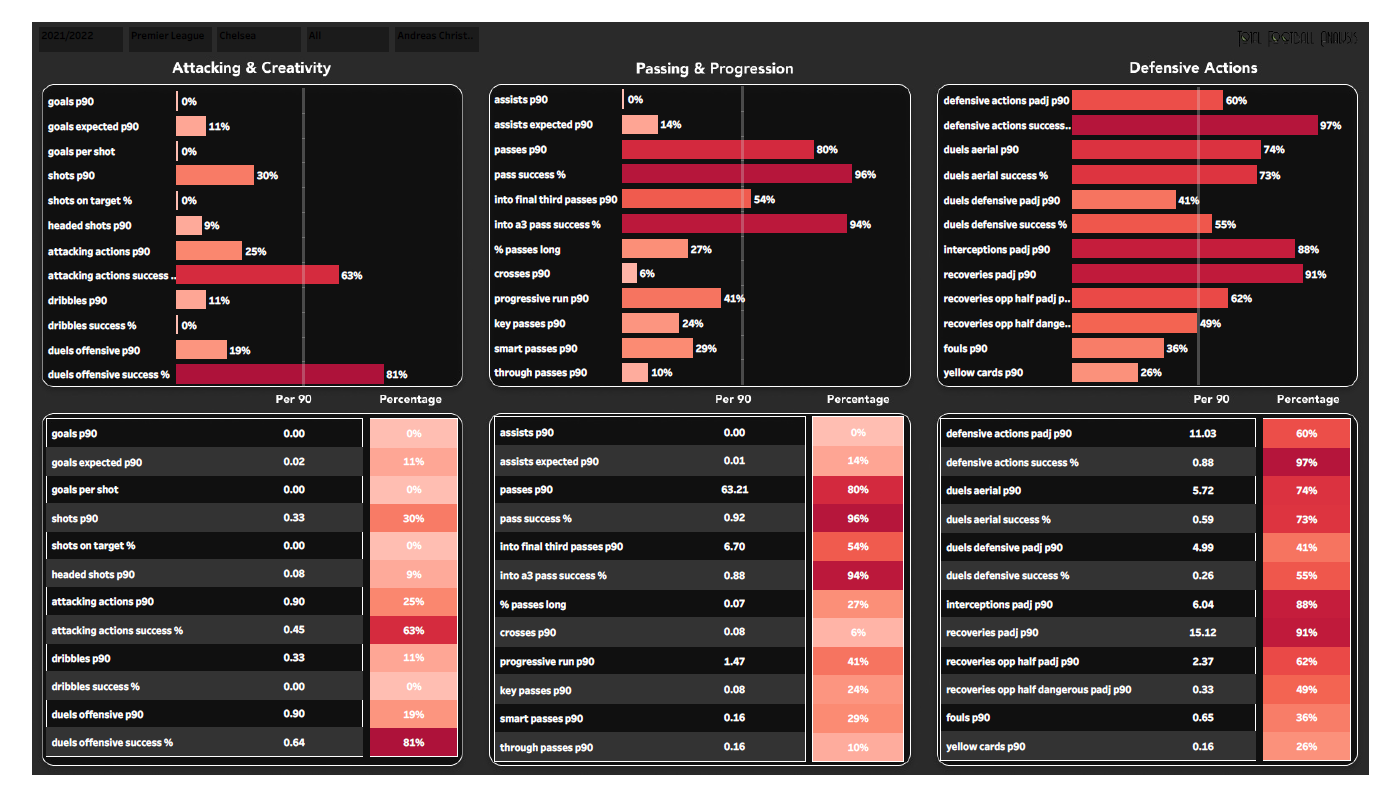 In the above viz., we can see Christensen’s overall stats this season. In terms of defensive stats, the Danish centre-back ranks highly in multiple metrics. His most notable stats are successful defensive actions, average interceptions per match, and average recoveries. Christensen has also averaged upwards of five defensive duels per match and more than six interceptions per match. Since taking over the managerial job at Chelsea, Thomas Tuchel has transformed Chelsea into a defensively solid side. The German manager has implemented a back-three system at Chelsea, and the likes of Antonio Rudiger, Thiago Silva, and Andreas Christensen have been some of the most impressive defenders in the Premier League. Although initially, he was not a part of Tuchel’s first-choice defenders, Christensen soon proved his worth after an injury to Silva provided him with the opportunity to show his mettle. Christensen has continued his impressive performances this season, securing 21 appearances across all competitions.

The above viz. displays the areas on the pitch where Christensen has engaged in aerial and defensive duels this season. It is evident from Christensen’s duel map that he has covered a lot of ground, engaging in many duels. In Tuchel’s 3-4-2-1 formation, Christensen is deployed as a right centre-back. One of Christensen’s most impressive qualities is his positioning. His positioning on the pitch allows him to make important interceptions. During transitions, positioning along with anticipation is of utmost importance, and Christensen is impressive in both. Given the fact that Atletico are struggling during quick transitions, Christensen could provide Simeone with an advantage as the Danish international is already comfortable in a back-three system and is impressive with his reading of the game and interceptions. 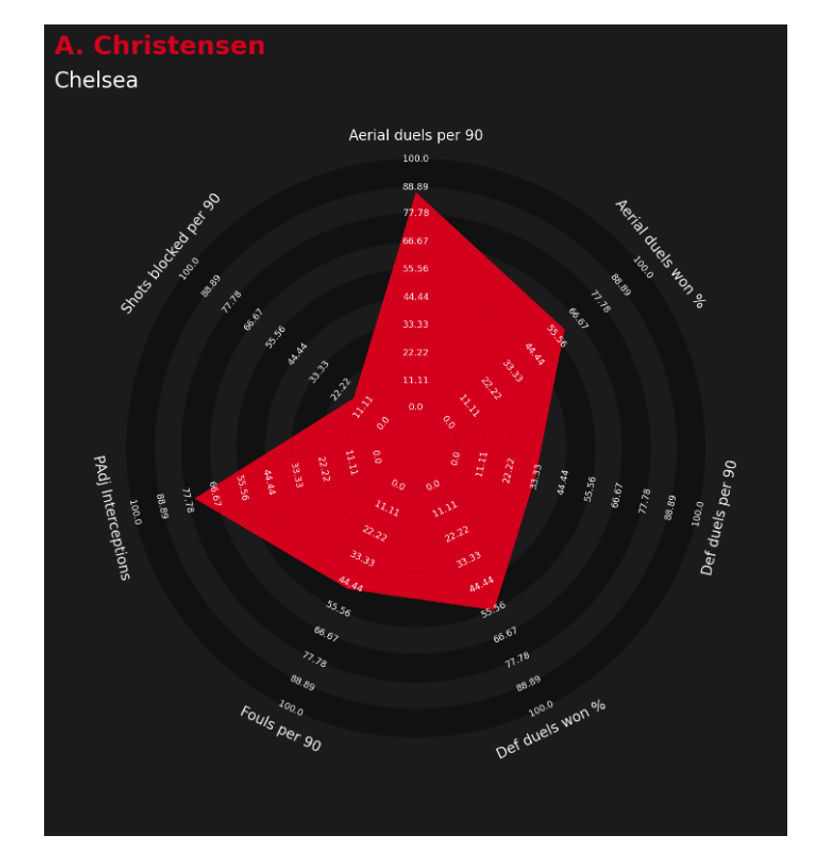 The above viz. further highlights Christensen’s impressive defensive attributes. We can see that he ranks highly in terms of interceptions and average aerial duels, while his success rate is also decent. Christensen also possesses steadiness and composure on the pitch, qualities that Atletico defenders have lacked this season. The Danish defender has rarely been caught out of position as well. 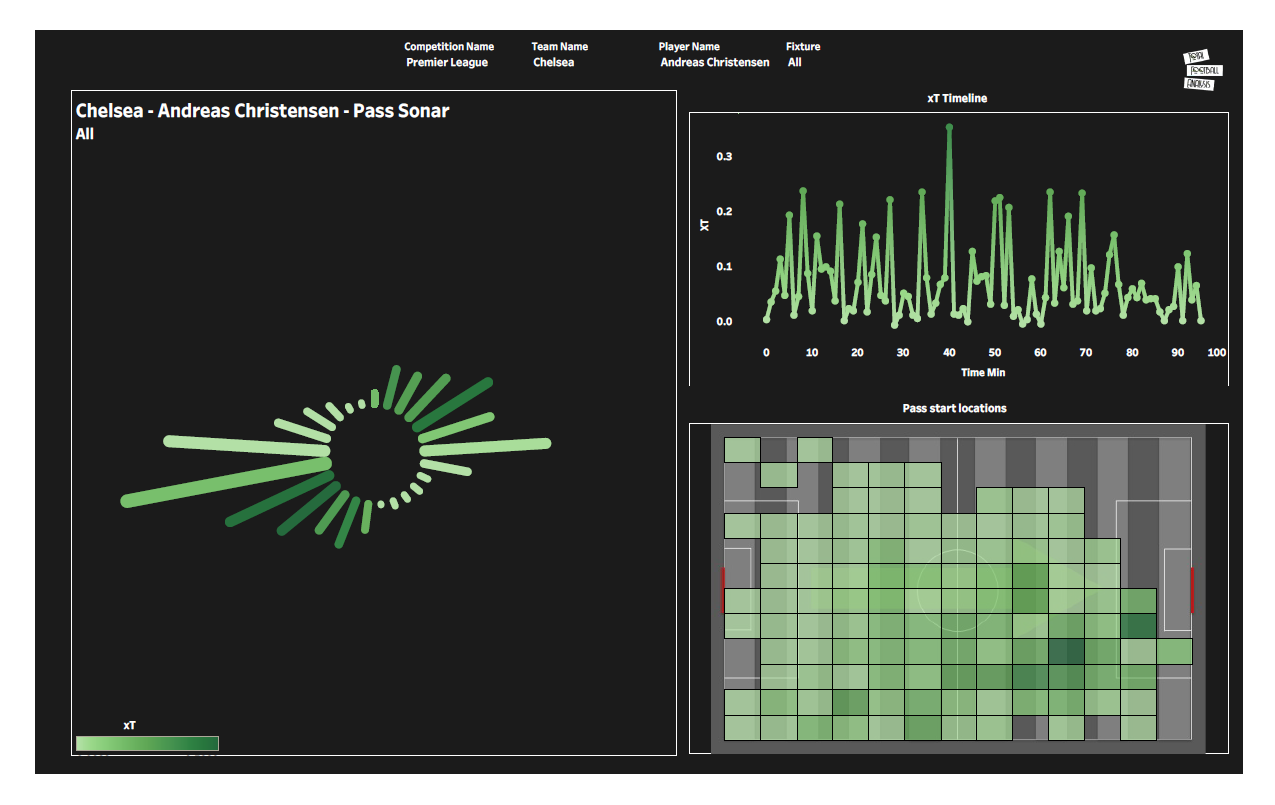 Pass Sonar outlines the direction of pass that a player or a team tends to make and indicates a player’s influence on the movement of the ball. In addition, it shows the frequency distribution of different passing angles for an individual player, as well as the typical length of pass attempts. Given Simeone’s recent inclination towards a more possession-based system, Christensen would suit the team as he has been impressive with his ball-playing ability and is assured in possession. In the above viz., we can get a sense of the direction of his passes.

Since last season, Christensen has proven himself to be one of the best defenders in the Premier League. The fact that he is already familiar with a back-three system makes him suitable for Simeone’s defense.